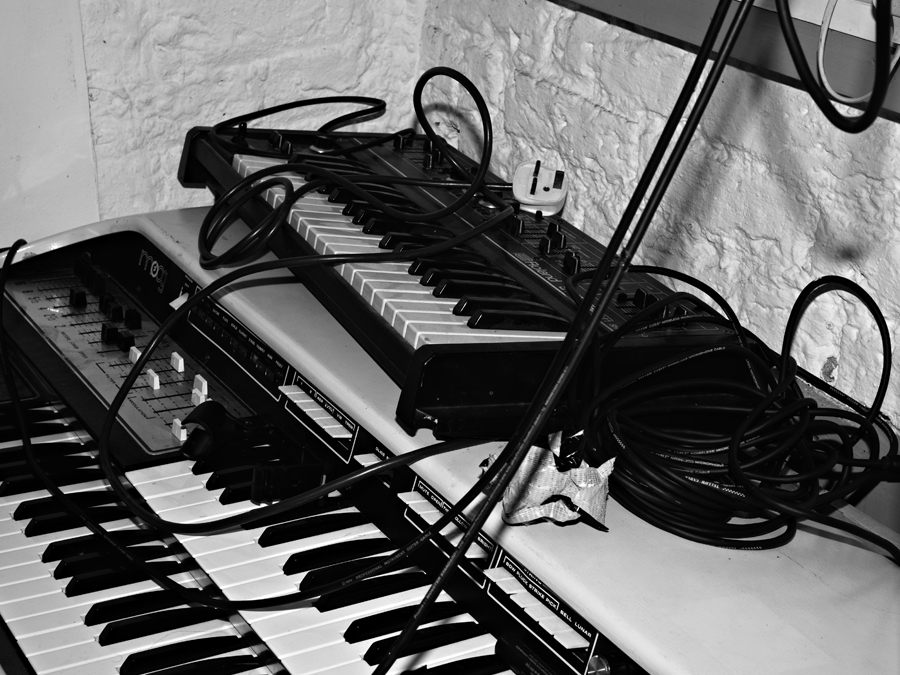 Thank God(dess) this year is over. It was, in a word, ass. That fact bleeds into the songs below, which tend to be of a theme. Doesn't matter because, as usual, music wins. Here is a mix of the most brilliant pop songs from 2012 (in no order).

1 Stars Hold On When You Get Love And Let Go When You Give It CAN
SONG OF THE YEAR
I knew by the fourth play that this would be my favorite song. And the story couldn't be any sweeter: A literally pounding, New Orderish manifesto from an indie Canadian band over ten years into its career. We should have the song's lyrical peak, “Take the weakest thing in you and then beat the bastards with it,” stamped onto tee-shirts. This is the highlight of a glorious, too-hot summer.

2 Marina and The Diamonds Hypocrates UK
Not the most obvious cut from the essentially perfect Electra Heart album, but this track - co-written with the legendary Rick Nowels - is the album's most vulnerable. It's also, in a non-showy way, the most sophisticated in that it's not remotely trend seeking. "You let go of me." A sad one.

3 Jessie Ware Night Light UK
All year I waited for an artist to appear out of nowhere and thank God it was Jessie Ware. Night Light’s cellos and cascading electric guitars create a seductive bed from which she cuts loose vocally. This is goosebump territory.

4 Gossip Perfect World USA
One of the subtlest songs Beth Ditto's ever recorded (and from an unfairly maligned album). This dark anthem literally glistens with Xenomania's twilight synths. The way she sings "be my accomplice" is so intimate. Where Beth Ditto goes, I follow.

5 Pet Shop Boys Leaving (Believe In PSB Mix) UK
This old school extended mix amps the most beautiful aspects of Elysium's lead track. For me, it's all about the intricate puzzle of a chorus in which every syllabus and word seems to lead tightly to the next. "I will believe in love."

6 Madonna Love Spent USA
Say what you will about MDNA, but this money obsessed William Orbit collaboration was just what I wanted. Not only is it essentially two songs sewn together, but the unexpected banjo is the stuff that made M the legend she is. Note that the acoustic version is equally intriguing even if it sacrifices those "fireworks" in the final minute.

7 Usher Climax USA
The last thing I expected was to find Usher on this list. But Climax is undeniably a late career classic. Collaborator Diplo turns the dial down and lets Usher's octave climbing vocal lead a very sad song to a thrilling, if heartbreaking, conclusion."Where are you now, when I need you around?" This was on a loop.

8 Cassie King Of Hearts USA
Forever chasing a second album release, aggro birdy Cassie returned with a lush discopop sleeper. Who knew this girl had it in her? The "here we go" bridge is the finest Tennant/Lowe moment they've never recorded.

9 Rihanna Love Without Tragedy/ Mother Mary USA
Clear away your preconceptions of Rihanna for this progpop epic: it's one of her best songs. Two strangely amorphous tracks welded together, it feels like the former needs to be remixed as a standalone single. But then you hear that goosebump line at 2:50, when she sings so purely, "As time flies way above me, for you I've cried tears sea-deep." There's blues in the notes.

10 Bright Light Bright Light Feel It  UK
My friend Rod Thomas saved this 90's House gem for his album release. New Kids On The Block are surely weeping now. And Rod is generous: Mykal Kilgore's wailing diva bridge steals the show gloriously. “Just open up your lips and say you love me.”

11 Elton John vs PNAU Sad UK/AUS
Old and new, Sad is so shimmering and lovely, it literally soothes. "Beneath these branches I once wrote such childish words for you. I held a dandelion when summer burned the earth again."

12 No Doubt Dreaming The Same Dream USA
Gwen closes No Doubt's flawless pop return with this cellphone-waver anthem. There's a solid thread of melancholy throughout this track as Gwendolyn copes with a disappointing romance ("who taught you how to love?") The final 90 seconds surges into a chill-inducing stadium frenzy.

13 Frida Sundemo Indigo SWE
Technically not out until 2013, but I played a rip of it on an endless loop these last few weeks of December. Swedish electropop that pulls off the Robyn trick of being completely anthemic, yet so utterly heartfelt. The chorus is a real giver: "Whatever they said / Whatever they misread / I'm illuminated / You're an indigo / What they cut / You're able to build up / There's no doubt in my mind / You're an indigo."

14 Autoheart Control UK
My friend Jody Gadsden had an impossible task - to follow-up an amazing earlier single with something equally worthy. He did it. Listen for yourself.

15 Jillette Johnson Torpedo USA
An intrepid tweep brought this slayer to my attention. I screamed about it on social media, but oddly never blogged it. Every year we need an empowerment anthem and this year unknown New Yorker Jillette brings out the big-ass guns: check out the martial drums that take the song out at 3:13. "Get me right in the heart / Blow me up 'til you see my ghost / But I will not lay down in the road / I will not make it easy." If you feel Florence, you need to hear this.

16 Sky Ferreira Everything Is Embarrassing USA
The one where Sky Ferriera finally has her moment. Collaborating with Brit Dev Hynes, she builds  an urban drama of indifferent love. "Telling me that basically you're not looking out for me." Figuratively and literally one of the best voices of 2012.

17 Missy Higgins Unashamed Desire AUS
I wish I'd had this manifesto as a teenager. The chorus is mammoth, but it's the bridge lyric that sends me into orbit: "We get one sweet moment in the arms of youth / I don't wanna waste time holding down the truth / I've got everything to win and only pain to lose / This is my / Unashamed desire."

18 David's Lyre English Roses UK
A strange tale. The album from which this is culled was held in limbo by a label and eventually self released this spring by David's Lyre creator Paul Dixon. And then he promptly abandoned the whole project. So love this Brit pop charmer as an introduction and a swan song.

19 Ren Harvieu Open Up Your Arms UK
I'll say this much, Ren's old school sweeping romance soothes the heart. There's something about that male backing chorus on the sax-laden (!) bridge that seemed to be singing directly to me. As good songs do, yes?

21 Haim Don't Save Me USA
Three sisters who are like the cast of GIRLS with guitars, harmonies and proper tunes. I don't know where they're from, but they belong in LA on a hot summer's night. Love the baller video too.

22 Girls Aloud On The Metro UK
Lifegiving. "A hundred o's and x's lighting up the dark / Now they turn into a question mark."  Viva forever, GA.

1 Marina and The Diamonds Power And Control, 2 Bat For Lashes Laura, 3 Bright Light Bright Light Waiting For The Feeling (Trouser Enthusiasts Mix), 4 Chairlift I Belong In Your Arms 5 Florrie Shot You Down, 6 Saint Etienne DJ, 7 Lianne LaHavas with Willy Mason No Room For Doubt 8 Richard Hawley Don't Stare At The Sun, 9 Solange Losing You, 10 Deacon Blue The Hipsters, 11 Rufus Wainwright Out Of The Game and, of course, Frank Ocean's Bad Religion.

Very diverse list. Some tracks I am not even aware of (and I am a MBW = Music Blog Whore!) so will check them out. Waiting For The Feeling would be up there for me (albeit, mashed with Gat Decor; damn Rob and his awesome auto-mashes!).

My favourite album is Saint Saviour's, easy pick there. As for songs, I will have to think about it. MDNA's Falling Free and Beautiful Killer def rocked my year. Invisible, by the PSBs, as well.

Really great list, and I like that it's songs and not just singles. My standout Jessie Ware song is "Taking In Water." The album is a true gem, though, and I hear something new every time I listen to it.

Ren's best track, for my money, is the almost Bond-worthy "Tonight." But you're spot on in terms of atmosphere and personality. She's utterly '40s -- in the best possible way. (And I mean that as a compliment!)

Brendan, I dig Tonight too. My other major fave is Summer Romance. I get it re '40s!

Dluv, Jessie Ware can do no wrong

Disko, I think Beautiful Killer is the most classic "Madonna" song on MDNA. Love it.

I totes agree with Beautiful Killer.

The problem with containing 12 months into one short list is that you will always come up with another contender at random moments! I was listening to an unlabeled disc in the car today and Mr Little Jean's Runaway came on. This would definitely be in my Top Ten, as would the next track that came on - the Mustang Mix of the awesome KDMS track High Wire. In fact, that would be my favourite remix of the year: deliriously danceable!!!!

Glad for your inclusion of that Pet Shop Boys remix, which takes the album version to a higher level, as well as the excellent Stars song. Wish the Saint Etienne song (or the sublime "I've Got Your Music") made the actual cut too.

I like R&B, but I think you may like it more. The Cassie song is good, but I can't get down with Usher, and why am I not feeling Jessie Ware as much as everyone else? Sort of like how all my hipster friends dig Tame Impala and I am lukewarm.

As for MDNA, I prefer "I'm Addicted", but your choice is one of the better songs. For Gossip I choose "Move in the Right Direction" or "Casualties of War", but I like yours as well.

You picked the best song from the rather flimsy No Doubt album. You also have me excited about Gabriel Bruce!

Found a number of wonderful tracks/artists playing all of the links here; very very thankful to you for them.