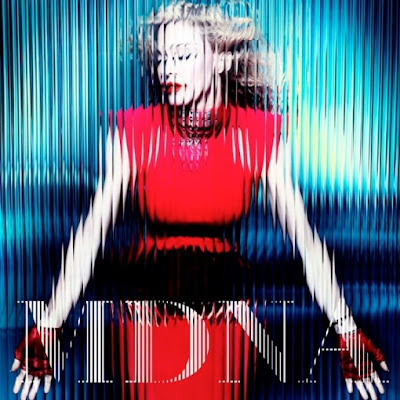 Thank the Baby Jesus, Madonna's recent (weak) singles are just a ruse. Her 12th album, MDNA, is a solid collection of party pop songs peppered with a few stunning moments of introspection. It's not Ray Of Light - there is only one of those - but it's a return to quality after the phoned in Hard Candy. Here are a few of my favorite moments...1 Girl Gone Wild: Let's start low and work our way up. There are a few irritants in this song, like the way she clips the note on the bit at 2:55 ("I'm a bad girl anyway, hey!") and although the spoken opener is a bit - you guessed it - reductive (Act Of Contrition meets Sorry?), I get a little thrill the way she says "because I love thee" at .13 seconds in.2 Gang Bang: Madonna’s wicked, chaotic Tarantino soundtrack is filled with surprises. It almost seems free of structure, which is pleasing. But the greatest bit is clear: the highly cinematic ascension of “Sgt. Pepper” strings at 3:49 - 3:55. I play that over and over.3 I’m Addicted: The repeated M-D-N-A bit in the final 45 seconds, especially the way she speeds it up at 4:20. This track also boasts one of the album’s best lines, actually written by Madonna: "All of the letters push to the front of my mouth / And saying your name is somewhere between a prayer and a shout."4 Turn Up The Radio: A relatively simple, yet effective stadium stormer, my favorite moments in Turn Up The Radio are the most fleeting: the whooshes of sound that come .07 seconds in and reappear later. I also love the line at 2:45 about blown speakers. 5 I Don’t Give A: BABY JESUS ON THE STAIRS, this is a good track! Another MDNA song that seems like multiple tunes sewn into one, I Don’t Give A’s greatest moment comes with the grandiose Game Of Thrones-y coda (3:22), which would be perfect as a show opener or closer. 6 I’m A Sinner: This is Orbit’s trick: creating a song with the “MDNA" sound that Martin Solveig imprinted on his own MDNA tracks - yet it also manages to sound like Music era Madge. I like everything about this song, but the "male" vocals at 3:17 (which may be Jean Baptiste or her slowed down) thrill me.7 Beautiful Killer has one of Madonna’s prettiest bridges (2:08 - 2:40) in years. Great songs are separated from good ones by bridges that seem like songs within songs. This one is notable for its gorgeous Papa Don’t Preach-like strings. Beautiful Killer is perhaps the most "Madonna-esque" song on MDNA. It has her production stamp all over it. 8 Love Spent: Perhaps because this song comes from the madman brain of William Orbit, it’s filled with true musicality, whatever that means. From the out-of-nowhere use of the banjo throughout the song to the way it's broken into two segments. But for me, it's the zapping percussion in the final 44 seconds that really sends it over the edge. 9 Falling Free is baroque, isn’t it? Like Jane Austen wrote a breakup song and recorded it in the drawing room. I most love the complex structure of this song, particularly the “Your days were to fly...” bit that follows each verse (first heard at 1:39). is it a chorus? I don't think so? My second favorite line from the album is its wisest and saddest (made stronger by her perfect vocal in the song's final moments): “When I let loose the need to know / We're both free, free to go.”10 Love Spent (acoustic): At first I was annoyed by the autotune remaining on Madonna’s voice - this is meant to be acoustic, right?! - until I realized it creates a nice contrast with the more stripped down vocal on the last half (that comes in at 2:40). The weird unintelligible (backwards? by Priscilla Renea?) bits added at 1:25 and 2:35 are a stroke of genius. "Hold on to me 'til there's nothing left."If you're curious about what I don't like.... Give Me All Your Luvin', Bday Song, Best Friend. Superstar is a bit sweet for my tastes. And for the record, I prefer the album cover image above (the standard) to the head shot of the deluxe version.Stay tuned for more on MDNA over the next two weeks.
UPDATE: Woah... William Orbit tweeted me, unprompted! Questions answered:

WaPo disagrees with you: http://www.washingtonpost.com/lifestyle/style/madonnas-joyless-mdna-gets-into-the-gnarly-nooks-of-her-personal-life/2012/03/26/gIQAPePrcS_story.html

I think the album is decent, but pales in comparison to "Confessions on a Dance Floor." It's better than the urban-pandering dreck that was "Hard Candy," though.

Oh yeah, no surprises there. More power to them.

I think "Masterpiece" is the best thing on the record. My second favorite is "Beautiful Killer", followed by "Love Spent".

With a rejiggered tracklist, I really like the album. That means excising the two singles and 'Masterpiece', and adding in the bonus tracks save 'Best Friend' and the remix. As it stands, the standard receives a C+. With my new tracklist, it's a solid B+.

Nice article, xolondon. 'Love Spent' is truly a great song, and I wish there were a few more tracks like it on the album. I appreciate the strange structure, and when it opens up towards the end. I lose it at that point!

Thanks for your 10 moments; always a pleasure to read your comments.

You know, I think MDNA gets better and better after a few repeated listens...so hang in there, for those that feel that it is all reductive of whatever. Even GGW has grown on me! (I think the Offer Nissam remix made me love it).

'Love Spent' is the earworm of the album, methinks. I was hoping for a more natural sounding vocal on the acoustic, but it works. It's Orbit, after all.

'Beautiful Killer' is the bonus track that should have been an actual album track.

And, if you add the Smirnoff package into the mix, the Kid Capri remix of 'Masterpiece' is both respectful of the original and enjoyable in its own right and Leo Zero channels his inner-Moroder (on Xanax, mind) to give TUTR a new slant.

'Falling Free' sound like something that should be on The Tudors soundtrack....with a bit of vocalising borrowed from Mike Oldfield's 'Moonlight Shadow' and '...Been To France'

What about "Some Girls"? I really like that track too.

I think Madonna has made a great return with this record, and while maybe not to everyone's taste, it sure feels more current than Candy, as well as more pop and more true to her. Not every track is a complete success, but if you look over her past LPs, many of them had two or three songs that didn't quite hit the mark. So, while not a masterpiece, certainly not lackluster.

Now if we could just help create some new Madonna fans. She has been around SO long, and her fanworld seems to be a rather insular plateau of a place where younger people may not "get it". (They've got a lot of younger models now that do similar things for them.) I don't think the album is actually selling as well as it could or SHOULD be...maybe that's a reaction to the lukewarm reception to the singles...but it really does have some incredible, magic moments that might not be making it to radio, and people need to know about that. Thanks for remembering the positives in your post!

One thing I noticed in the credits on the CD sleeve is that The Demolition Crew (who the?) are all over the album, whether co-producing, mixing, providing instrumentation, whatever. So, even though all the reviews go Orbit! Solveig! Benassi! it really is a cohesive CD brought together sonically by the Crew.

Nothing on Wikipedia comes up on The Demolition Crew. Who are they?

Thanks for all your comments. I was just telling a friend who had an initial meh reaction that I feel like this is a "grower" album. we DO like a grower as much as a show-er!

Oh, the show-ers are the instant thrill, but the grow-er...well!

I'm not familiar with some of the names listed as part of The Demolition Crew, but the person with the greatest number of credits, Demacio Castellon, is Nelly Furtado's husband, and has been engineering various Missy/Timbaland tracks for over a decade.

If the album doesn't sound like _Hard Candy_, it's because "urban" music has changed since 2008, not because Madonna's stopped pandering.

Thanks, esque. Demacio is a very clever lad, then.

Urban muic 'has changed', I agree. All the hip-hoppers are using rave riffs, so Madge is just moving with the times.

this album is just like the hunger games (movie version). people had such ridiculous high expectations that once the real thing was available it would never live up to their expectations. i think this is a really good album that (for the most part) makes me want to get up and dance. no, it's not ground breaking...and no, her lyrics did not get any better. but it is a helluva good time!

ps - so glad to find someone else who really likes i don't give a. i've been enjoying some hardcore nyc busting through tourists and chanting i don't give a fuuuhhuhuuu...

Oh God, that fuuuhhuhuuu in the operatic closing of the song is beyond awesome. I love that the choral voices are literally saying, but not really saying, FUCK!

YES YES YES re I don't give a fuuuhhuhuuu...

What about Some Girls, did you like it? I LOVE it.