Best 2011: This Is Bigger Than The Grammy Awards 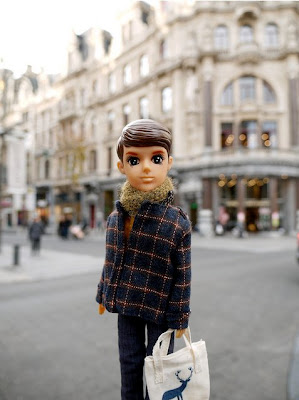 Pretend I am giving out these awards in a posh hotel in London, surrounded by drunken popstrels...Artists of the Year: Will Young and Florrie. He finally reaches his sublime peak with Echoes ten years into his career. And Florrie, after a period of finding her musical voice, releases Experiments, the most listenable, concise pop music collection this year.

Singing Voice(s) Of The Year: Ed MacFarlane from Friendly Fires, Will Young, and Wild Beasts' Hayden Thorpe, whose voice finally tipped from weird to so right in 2011. And lippy Lana Del Rey (aka Lizzie Grant) for some fearless "monotonic" trilling. And Adele, of course.

Wiggling Butt Trophy: Ed MacFarlane. Behind every great voice is a great ass.
Most Precarious Hype: Okay, yes, Lana Del Rey. Let's admit it now: this could crash and burn. Latest release Off To The Races gives some hope though. Born to die, indeed.

Producer Of The Year: Richard X for his work on Will Young's perfectly realized Electro Pop Moment, Echoes. Total eleganza. Careening emotion without breaking a sweat.

Three Wise Men Who Deserve More Respect/Attention Than They Receive: Chris Glover, aka Penguin Prison, for his gem-laden debut, which is almost a Greatest Hits record. This guy has it all and not enough people understand that! Wolf Gang's Max McElligott, who did an equally fine job merging indie with pop melodies on Suego Faults' 10 tracks. I'd also add Jamie Woon, whose debut Mirrorwriting is the most subtle, lovely fuck music of 2011.
Best Musical Trend: The perfect EP. Following Robyn's EP mentorship in 2010, Beth Ditto and Florrie NAILED it down in 2011.

Lyrics of the Year: There are so many, but some are quite plain, with a personal meaning. Instead, here are two great lyrics that wordsmith big emotion...
Jamie Woon, for the heartbreaking conclusion of Shoulda:

When the years are collected
I pray that we are regretless.
You and I, the connected
You and I and the blood and the bone.

And the chorus of Bon Iver's Holocene:


…and at once I knew I was not magnificent
hulled far from the highway aisle
(jagged vacance, thick with ice)
I could see for miles, miles, miles

Worst Lyric of 2011: This clunker from Marry The Night by Lady Gaga: "Love is the new denim or black."

Live Show Of The Year: Without a doubt, for sheer (gay) spectacle and audience love, Kylie Minogue slayed them (in Fairfax, VA of all places). Also loved Will Young at Shepherd's Bush Empire in West London. He owned the stage... "totes" imperial/totes adorbs. Both had excellent tour programmes too. Laura Marling was a blessing since I saw her in a synagogue.Most Unexpected Pop Moment of 2011: Sitting on a couch in Brian Higgins' big studio/office in the Xenomania HQ in Kent, answering the question of what I thought of Lana Del Rey with "I need to hear an album first."

Most Missed Blog / Website: Remember The Eighties, supposedly due back in 2012.
Kylie Minogue Put Your Hands Up (Pete Hammond Mix),
Most Obviously Tired Award: Lady Gaga wins for the third time in a row. The Edge of Glory video-shoot meltdown said it all: personal drama ruins what should have been her finest moment. Rihanna's running a very close second.
Frankmusik's Brit-ruined-by-LA mess Do It In The A.M. (I hope he doesn't read this! I just heard a loss of identity in this record.), and Beyonce's screechy 4, complete with creepy, uncharacteristic pregnancy-whoring. Then some bewildering stuff: Kate Bush's 50 Words For Snow aka 50 Words For Slow, Feist's torpid Metals (which may someday grow on me, I admit), Stevie Nicks, whose latest solo record wove about five solid tracks into a tapestry of dull... or better yet, a shawl of meh. Rihanna made her umpteenth album in a matter of weeks in random hotel rooms. It sounds like it. Though TTT has a few great singles, the rest is filler.
THE WHY ARE YOU SCREAMING AWARD goes, sadly, to my girl Florence Welch, who shouts her way through one of the loudest albums of the past few years. I've heard Ceremonials sounds much better on speakers in a room (versus earbuds). Maybe when I move into a cathedral I'll finally understand what that means.

Best Pop Diva Moment #2: Darren Hayes telling me to have the French toast while he chose some berries. "Tell them I eat." he said, waving his fork over the bowl.

Worst Trend #1: Artists on Twitter responding only to negative tweets, thus 1) fueling more negativity and 2) alienating fans who come offering a positive comment. I don't care if its hard for you to respond to a compliment; that is a part of fame. Say Thank You and move on.

Worst Trend #2: Also on Twitter: Self aggrandizing hashtags and retweets. We do not need to see that everyone loves you. Bully for you, boring for us. And that hashtag branding? Gauche.

Good Riddance Award: The haughty/phoney Natalia Kills. who is probably waitressing at an Angus steakhouse in London. This shit happens when you rip off an artist (Gaga) who has already used up her own bag of tricks. It's like double jeopardy.


The PR Award: Really? You Expect Me To Fall For This? I absolutely loathe Jessie J. And Ed Sheeran: pointless and derivative, if less offensive than Jessie.

Worst Song: Price Tag by shriek queen Jessie J. Followed closely by a Lady Gaga tie: Born This Way or Judas. You pick based on how loose your bowels feel in the moment.

Not done yet! Next: Top Songs, Top Albums and a huge-ass list of almost every song I loved in 2011. Follow me on twitter in 2012!
Cravenly, I am also on Tumblr and lastFM. And here are my 2010 lists...
Posted by xolondon

Email ThisBlogThis!Share to TwitterShare to FacebookShare to Pinterest
Labels: Best 11, Florrie, Will Young

Since I don't read blogs anymore, I can't tell you that I thoroughly enjoyed your list. Murry Chrimmus to you!

Jessie J has got to go. Interesting you brought up "Masterpiece" as well, initially I was quite taken by it but am now hoping it is nowhere to be found on the new album and sticks to being just a W.E. track.

I still read some blogs and always read yours. I have some great albums in my collection that I wouldn't have known about without your blog!

Great recap of 2011. I don't read blogs anymore either. Unless, of course, they are in my Google Reader, which your is. :)

I love that you have strong opinions and refuse to back down from them. While I wouldn't want to be Frankmusik or Gaga this year here, I suppose Natalia Kills is deserving of some slagging, but I think Jessie J is much worse. The woman actually HAS talent and chooses to use it in such unappealing ways, and yet the public at large generally find it acceptable. Horrific! She could be so much better, and THAT is the tragedy there.

I love your Richard X namecheck, and quite frankly, he has been a great producer for years now. He did some fantastic work on the Sound of Arrows album too, and even made the mediocre Innerpartysystem sound amazing. He seems to be everywhere, but always lends his best ear to whatever a project calls for, and that's what makes him great.

As for the EP, I sort of agree, yet I was just telling someone today that I wished Beth Ditto had just gone for it and did a whole album. The material was great, and I think the project would have had more impact than it sadly had.

Best show of the year is a no brainer--you hit it on the head. Also, the Feist album did not move me at first. Then I listened to it about ten times and grew to love it. However, I think St. Vincent may have now moved into the "more interesting than Feist" territory. Still, she has a great voice. Any feelings on the new Charlotte Gainsbourg?

A very happy 2012 to you! I will continue reading as long as you continue to compose. It's refreshing reading well thought out musings for a change.

I am glad to see we have some literate popstrels who still READ! xo

Generally I just look at the pictures, I had to scroll through all that dribble and no pictures... disappointed. lol

The remix of Josie Cotton's "See The New Hong Kong" was a great choice. Her entire "Pussycat Babylon" album was a fantastic surprise.