Mixtape: My iPad is Fkn possessed! 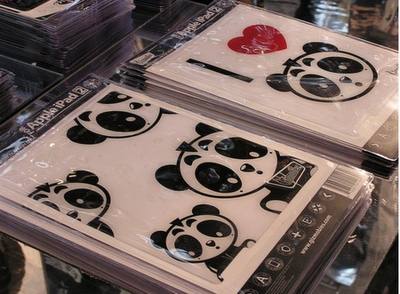 If I seem "sparse" these days, I am. Late August and early September are always hard times for me to blog as real life overtakes me. One bit of news: I got an iPad! I feel terribly guilty because there are wiser ways to spend my money, but... hey, I wanted one. Nicola Formichetti of Lady Gaga fame has designed some iPad skins (above top) for his NYC pop up store. Vair vair cool, but I have no clue how to buy one online.

Let us start with a recent tweet of mine: Dear The Gays: The Empress Barbra Streisand is back - and with her early 70s hair. Love, xolondon

Bjork's new songs have been decidedly subtle on melody (which means I am not reacting well). The score versions present the songs in another form, which may bring out the melodies more clearly. Hear for yourself.

Recently I tweeted about some fake Christmas albums. Here are some I came up with: A Very Radiohead Christmas? Home For the Holidays With The Gallaghers? Bieberful Holiday? Ke$ha's Kristmas F*ck? For the latter, I did a full post, which I hope you ho ho hos saw.

What to make of the new Coldplay song, Paradise? Bombastic, pretty, and initially not very strong on melody. They are so "produced" lately.

The new Laura Marling album, out next week, is very good, though I am not sure it exceeds her previous one. I think people want it to, so they keep saying that. Here is a 9 minute EPK from Laura. Moody shots of her moping around Argentina abound, with Laura looking Children of The Corn in the the ominous opening shot.

George Michael is touring, as older pop men do, with an orchestra. He does Kissing A Fool and A Different Corner and...Rihanna's Russian Roulette? Much like his Cover To Cover tour back in 1994 (I was there!), the show is filled with covers including Rufus Wainwright's Going To A Town and Terence Trent D'Arby's Let Her Down Easy. The Guardian flipped over this tour. but so far no North American dates.

Whatever happened to Sam Sparro?

Cher is a must follow on twitter. She's exactly who you want her to be, no holds barred. The Gardian noticed her brilliant tweets, like these gems: "My iPhone is Fkn possessed!" and "Fk-IT Even PICTURES R HAUNTED!"

Keeping the Gay Gay Gay theme, NYT did a great interview (or vice versa) with RuPaul last week. Ru is very quotable but I love the section about the "baby strollers, and the just as colossal air of entitlement, that have invaded the hallways ('This is a fire hazard') of his West Village building."

If you love piano/string arrangements with female vox, you should try the new Catherine A.D. release, Communion. It was produced by Liam Howe of Marina fame. Going Wrong is gorgeous.

Holly Johnson of Frankie Goes To Hollywood still has it. Watch this performance. The Power of Love, the last song, is in my top ten favorite songs of the 80s.

As I do, Chart Rigger likes the new Darren Hayes single, Bloodstained Heart. Now, Robbie, I would not call this a jam, per se. I've heard the new album and it's notable for brilliant string flourishes and high emotional drama. More on that soon.

Shiny & New ranks Tori Amos' new tracks. I've heard this record too and it has a bit of the old Tori magic, if you don't mind like twelve Yes Anastasia's in a row. The real story here is Tash Hawley, Tori's daughter, who sings lead vocals on Joe's Coffin. That girl has a future -she's incredibly expressive for a ten year old.

I actually agree with Shiny & New that the new Florence and The Machine track (What The Water Gave Me) is merely fine. It does not scream "play me again!" the way I hope her upcoming single will. That track may or may not be called Shake It Off.

So Hip It Hurts talks about the similarities (in the extreme, I'd say) between Emelie Sande's stirring debut single, Heaven, and the Massive Attack classic, Unfinished Sympathy - a song I thought was called Unfinished Symphony for like 10 years (sad but true). Sande's debut album is due in early 2012.

I hope you are following 80's Record Party on tumblr. It's amazing. I also adore Sounds Of The 70's/80's. A makeshift name for a fabulous tumblr.

Penguin Prison's album is OUT NOW in the UK and in the US on October 18. Amazing debut record. Seek it out. But first read this short piece from Magnetic.

Good news! The Smiths forthcoming remasters will be available in a £35 version from Rhino.

Florence + The Machine's new album has been pushed up a week, to Oct. 30! At least in the UK. Still no details released. All we really know is that the Deluxe edition will have an extra CD of remixes and tracks. Speaking of which, here is the first mix of What The Water Gave Me, this one a bootleg mix by Scully Bros.

In the There I Said It department, I absolutely loathe the Lady Gaga single, You And I. Horrid 80's bombast. The video is yet another kitchen sink set of weird images that she's done before.

James Blake is covering Joni Mitchell's A Case Of You - who hasn't? - on his new EP. Maybe he realized his debut album had only a couple of actual songs? A very good singer in search of a tune.

Keane is recording their 2012 album now.

Ladytron have charged their look in a big way for their elegant new video, White Elephant. I like them, but I do wonder how they have the money to do all this? Who exactly buys Ladytron records?

Finally, THE RETURN OF DOWNTON ABBEY IS IMMINENT.

I buy Ladytron records. I may be the one bankrolling the whole affair.

So it's YOU that paid for that pretty video!

Me and a never-recouped Christina Aguilera advance.

A lot to digest here...Now that I have heard the Laura Marling album, I think I like and not love the album the way I did the last one. It all seems a bit--start a song slow and very quiet, then build to a big ending, adding banjos on the way. In that sense, a bit formulaic, and it seems like she is willfully trying to not write anything catchy or accessible like a couple times on I Speak Because I Can. That being said, she is still far, far away from any peers who even attempt to perform folk music, and Joni Mitchell should be impressed.

Can't wait for the Florence record! It seems so soon, but I guess when you have big success...now where is La Roux, Ladyhawke, Little Boots, NO DOUBT, GARBAGE...even Marina is nearing completion of something, and that was only little over a year out, right?

I buy Ladytron albums, and I like Yes Anastasia, so I will probably like this Tori a lot more than the past few. Must get the Penguin Prison when it's out physically...

That Lady Gaga song was not made for you. It was made for country music fans so they could see how Gaga could fill that Shania void, and still kick it Def Lep style (thanks Mutt Lange)--hell, how many times does she namecheck Nebraska in that song?

Keane lost me with that last EP, and I even really liked the previous (third) album. They're gonna have to work hard to win me back.

Count, apparently there are a slew of You And I versions that change the state namechecked. Like a radio station call out thing. So tacky!

Of course they change the state names. I can hear it now..."Just something about my Delaware guy..."

Sam Sparro! I wonder about him too - that last record was so good.

Ladytron! I buy their records too.

I think Sam has been working on new stuff and is sporting a new look.

The synth reminds me of Crystal Waters.

I was trying to forget that one, Z. Though I love the 90s feel.