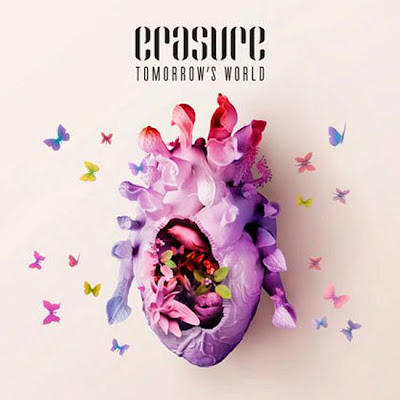 Erasure are now streaming their new Frankmusik-produced album, Tomorrow's World. At a lean 9 tracks and 30 minutes - old school! - initial standouts are the lovely, airy What Will I Say When You're Gone and the surging Then I Go Twisting. Like several of the songs, though, you feel like the latter ends before it really lifts off. Regardless, this album represents an attempt to subtly take a risk, which has been Erasure's albatross after years of tepid albums.

I am not a huge fan of the first single, When I Start To (Break It All Down). It's their most melodic release in years, but there's something shrill about the vocal, like it's just out of Andy's range. Another track, A Whole Lotta Love Run Riot, sounds as if it was ripped from Frankmusik's own new album. Do It In The AM, out today worldwide. Following his own amazing debut, the follow-up is a real disappointment... samey tempos, little depth. If you want one of the decent tracks, try Ludicrous.

Oddly, despite the album's short length, the band put the title track only on the b-side of their single (you can find it on iTunes). It's an instrumental, but it's quality. The digital versions will contain some extra songs, including the darker Give Me Life.

Tomorrow's World is released next week, on October 3. Idolator really likes it, but I still think the cover is a bit... vaginal.

What do you think of what you're hearing? Better than previous work or... not?

I had no idea about this. Can't say I'm a fan, but I want to hear this one. After Kim Wilde's atrocious A Little Respect this might be... a little respite (I'm on fire).

This is definitely an energized Erasure, although I also like the wistful, thoughtful Erasure. That is to say, I thought Nightbird was genius (and still do), as I would not call that a tepid album at all. Light at the End of the World was not their best either, but not as bad as many would have one believe (Sunday Girl, I Could Fall in Love With You, Fly Away, and the lovely Storm in a Teacup, etc.) This just sounds more buzzy and modern. I wonder how Frankmusik's album will be received as it seems to have replaced a lot of its wistful charms with choppy pop overload as well.

re: the length of the album. What is this? A Barbra Streisand album from 1968? Although, come to think of it, Erasure's take on something like Simply Streisand would be very interesting.

The single really didn't do it for me at all, but we'll see what the album holds...

Yes, as far as the length, I don't know why they couldn't just make it ten tracks since there is one on the upcoming bonus disc. What's the 10th track on the UK iTunes edition? An exclusive? Again, why not on the disc fans are paying more for?

I know their early albums were short, but this is really pushing close to EP territory. Remember when the self-titled album came out and was 11 songs at 70 minutes long? Over twice the length of the new 9-track album, and only 17 months between releases (I Say coming out only a year and a half earlier). This time release difference (since Light at the End of the World): 53 months. I know Andy put out a solo album, but geez...

Too much electronic vocal manipulation. Andy's better than that.

Tomorrow's World was a popular (now cancelled) Science programme on the BBC going way back. It had different theme tunes, and their track 10 is a cover of the 80s theme tune.