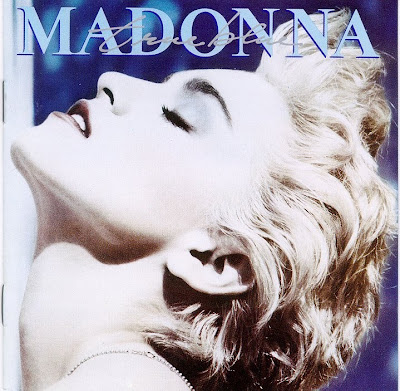 True Blue was released 25 years ago today. At the time, it represented a huge stylistic leap for Madonna. When the first single, the monolithic Live To Tell, came out several months before the album, Madonna presented not only a more sophisticated image, but a voice we'd never heard before, far deeper and richer. She followed that with one of the most exciting singles of her career, Papa Don't Preach. The signature strings on that song have influenced countless other hits over the years.

The LP, which boasts one of her best cover images, was Madonna Goes To California. Bright and bold. The title track channeled doowop heaven and boasted one of her greatest middle eights ("noooo more sadness, I'll kiss it goodbye..."), while Open Your Heart, like the earlier Angel, remains one of her best lesser hits. There are moments on the record that sound dated (Love Makes The World Go Round, which she first premiered at Live Aid), but it remains one of her finest albums. To celebrate, I am taking a poll - no, not a pole, a p-o-l-l - on your favorites... feel free to comment too.

God, what happened to that "deeper and richer" voice by 1992, when she basically either talked or thinly cooed her way through Erotica? Guess she was spreading herself...to thin with the book, music and movie projects at that point.

Anyway, True Blue - I bought the 45 for "Papa Don't Preach," so I had to vote for that. I think what I loved most about Madge back then is that she reinvented herself with each album, and did so without the use of bones sticking out of her face or phone receivers jutting out of her puxxy.

God, I sound old. Anyway, I also picked "Live To Tell" (one of my top 5 faves by her) and the album's disowned-by-Madonna title track. That bitch is cold for never including it on her greatest hits collections.

And, sorry, Rolling Stone, there's only going to be one reigning Queen Of Pop until Madonna's records are broken.

Now I feel old, remembering watching Live Aid in my bedroom and recording the Madonna Love Makes the World Go Round on a cassette recorded (crappy technology!). It's Open Your Heart 12" for me every time, I still play that one now.

25 years!? Geez, I feel old. But I'm younger than Madge. lol Bought this on cassette when it came out. Played it in the car nonstop for months.

Had to go with "True Blue" as my favorite off the album. It's in my list of top songs ever, actually. "Open Your Heart" is next. The third was more difficult either "Live to Tell" or "Papa Don't Preach". Coin toss later & "Live to Tell" wins.

Been a Madonna fan since day one. This was the album that said she's here to stay. A few missteps (notably "Erotica", "Bedtime Stories" & "Hard Candy". Each had their moments but as whole albums didn't work for me at all.)

No votes for Jimmy Jimmy so far, as it should be.

Yup! This and 'Like A Prayer' are her best two but let's also give some credit to the incomparable Pat Leonard who wrote most of her material during this period. Comparisons with Lady Gaga are specious. Madonna is the ultimate showgirl but Lady G is a musician.

Thanks for the comments.

Music Obsessive, you are tweaking me. Pat did not write that music alone. She was right there. This is not a post about Lady Gaga. You could say Madonna is or is not a zillion other artists. No bearing.

live to tell brings me right back to when i first got the immaculate collection (i know, a little late) and would listen to it alone in my room and yearn for love that deep. still to this day, it gives me goosebumps. oh, and in my childhood "who i want to be" book under the Favorite Song category it is written in crayon... "Tru Blu by madona" for real.

John - I've grown to have a slight fondness for "Jimmy Jimmy" over the years. I always counted is as one of Madonna's worst songs, but really, it's only crime is being terribly dated.

I voted for "Live To Tell", "Open Your Heart" and "Love Makes The World Go Round." The latter is one of my favorite of Madonna's album tracks. It is so joyous and fun and reminds me so much of that summer of 86 when I first started paying attention to music that didn't involve Olivia Newton-John on lead vocals.

That is epic Mclean!

Jimmy Jimmy is not THAT bad. Better than Spanish Lesson! I like Love too, despite my diss above.

It isn't as bad as Spanish Lesson, but it is the weakest track on True Blue.

One of my fave early teens albums. I thought i was so rebellious as Madonna was frowned on in Mormonsville...!!

"Live To Tell," no question, which elevated Madonna to a whole new level. "Crazy For You" was also a ballad, but the maturity of "LTT" (helped along by the video) served to shut many of her more reflexive critics up.

Of course, then came "Papa Don't Preach," which showed Madonna wasn't done button-pushing. And thank goodness for that. I always found it amusing that she tweaked the lyrics to be pro-life and yet she still received so much heat for the teen-pregnancy theme, etc. (I recall having an argument with my mom at the time, who would reach to change the station in the car whenever it came on.)

"Open Your Heart" is a fantastic tune, but the video is what cements it as a bona fide classic -- a balance of the naughty and virginal innocence. Which young (gay) boy didn't imagine themselves as the lad with whom she cavorts at the end. I even had a hat like his for a time.

I agree that Patrick Leonard deserves credit. The songs Madonna wrote with him are among her best.

Her voice did change on this album, but honestly, I've never thought that she had a pleasing voice. Technology has been good for her.