Five things about me... 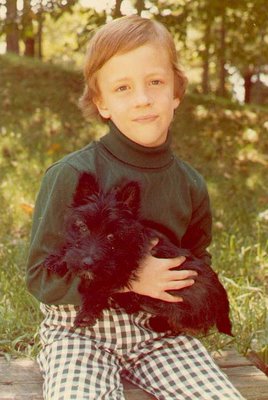 I rarely blog about myself, but five years ago I wrote this post and it seemed to go over well, so here it is again at the holidays. Best of the Year posts coming soon, but until then...

1) Enjoyed watering the patio. I am serious. I would go outside and proceed to hose down the patio. I think I liked watching the concrete go from light to dark. It would dry and I'd do it all over again.
2) Wanted to live and/or work in a Fotomat Booth. These were tiny enclosed huts in parking lots where you could drive up and drop off your film to be developed. They were big enough for one person, sort of like toll booths. I was - and am - obsessed with organizing small spaces to live in comfortably. I was the type that built forts out of sheets and cardtables...

3) Would imitate Sonny and Cher on my front lawn. What does a parent do with that? That (Sonny and Cher) was my favorite TV show (I know, spare me the commentary), which I would always watch with a bowl of chocolate ice cream. Friends know that I can no longer stand chocolate ice cream, but I remain ever-faithful to Cher. Diss her and I will promptly crush your gonads and then run away in tears.

4) Would cry at the end of every episode of Lawrence Welk. That may be too obscure for most readers. He was a vaguely accented Polish bandleader who had a cheesy 70s variety show. They'd play waltzes and polkas, and women in dresses that looked like nightgowns would sing popular AM radio songs with pleasant orchestration. The closing song went, "Good night, sleep tight and pleasant dreams to you / Adios, au revoir..." This signaled bedtime, hence the tears. [Ed: Tears again. Looks like I spent a lot of my childhood emoting.]

5) Would steal candy from various spots my mom had hidden it. This behavior has impacted me to this day, as I have a serious sweet tooth. People hang out with me and gain weight because I'm all, "Hey, let's eat a cupcake! Have a donut now!" I also know where the best candy is throughout the world.

OK, so--not only were we both kids who grew up in Kansas (City) who eventually moved (fled) to the east coast--we also both obsessed about Sonny & Cher. I also enjoyed Lynda Carter as Wonder Woman, Almighty Isis, and Battle of the Planets cartoons. I think, when you grow up surrounded by a slow(er) pace of life and you have a creative personality, you begin to look for things that seem somehow special and flashy, bringing you out of a humdrum world just a little bit (at least for me). Look, I am a forty-year old who still loves pop music as much as I did at 13, and I feel very sorry for those who seem to lose their interest in such things because they get older and life gets in the way. I CHERISH those things.

I also loved the fotomat booths and took loose change from my dad's sock drawer. I don't remember much about Lawrence Welk, but Hee Haw made me laugh sometimes. I also found a Scottie when I was 17, dying of thirst and covered in thorns, wandering in a wheat field. Nobody claimed him (Shadow-RIP) at the shelter, so he eventually became the love of my mother's life (sorry Dad).

Who didn't water the patio in Kansas summers? There wasn't anything else to do!

Kudos for remembering the minute details of a misspent youth. Could Keith Richards do this?

love this post, particularly the sonny and cher memory. and the picture. so adorable :) I used to pretend i was Edmund from The Lion The Witch and The Wardrobe. And then there was the summer i was obsessed with Grease and dressed like my fave character. Frenchie. For shame.

@count OMG that Scottie story! Wow. I as born in KC and was there until I was 5, when moved to Atlanta, where the pic was taken. I still remember the Country Club Christmas lights though...

@Paul Frenchie? You need to write a book!

This is bizarre because 1) I used to love washing the foundation of the house; 2) I wanted to work in the booth, and was even known to snatch empty envelopes from the night drop to assist in my plan; and 3) I was a reverse claustrophobic as a child, so forts were my favorites.