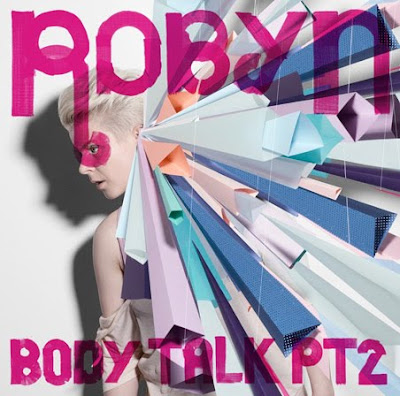 It's probably not a secret that I did not squeal with joy over Body Talk Pt 1, at least as a body of work. It plays like a bunch of tunes - of varying quality - slapped together on a disc. Initially, it seemed insulting to stick Dancing On My Own near a trifle like Fembots. Now that we know Robyn really is carrying forth her multiple EP plan, I have taken a step back and can more clearly see what she's going for, which is ultimately an album she, I, we, you can build.

Body Talk Pt. 2 is bookended by two of Robyn's finest recordings. In My Eyes opens with reference to Konichiwa Bitches, but has no real corollary in her prior catalog. With its synth-heavy fullness, it will lift off the roof when it's performed live. It mines the positivity and hopefulness that is characteristic of Robyn's best music (see Dream On) and is solidly, happily radio-ready.

Hang With Me seemed so perfect as a ballad on Part I, yet now we have another tears-on-the-dancefloor classic (hear/see below). The first time I heard the album mix in all its glory, the hair on my neck stood up. How does she do this? Does she encode the notes with some sort of emotion enhancers?

There is still filler, but it doesn't peck as much. We Dance To The Beat must be an attempt to update the grooves that groups like DeeeLite used to pop out, though the processed vocals remind me more of 80's Laurie Anderson.

Lyrically, Robyn's humor remains at the forefront of her best uptempo songs: As for the other book-end, the stern dandies in Hurts will cry like babies when they hear EP-closer Indestructible. It is labeled "acoustic," if by "acoustic" Robyn means "monolithic chamber music epic." Her perfectly recorded, delicate vocals are the centerpiece; there's something thrilling about hearing Robyn sing, "This is hardcore, and I'm indestructible" to a string quartet.

Yesterday on this blog, I posted a video with a quote from Kate Bush. She said, "I think everyone is emotional. A lot of people are afraid of being so. They feel that it's vulnerable. I feel that it's the key to everything." This is what Robyn does so well and this is why, again and again, in the voice, the notes, the instruments, her music becomes so personal. "If you do me right, I'm gonna do right by you. If you keep it tight, I'm gonna confide in you." In a perfect world, this would grab us right through the radio and we'd be better for it.

I think you are right about Robyn's "build an album you like" aesthetic, and I think that formula works best with these kind of projects, and maybe less so with albums like the latest Arcade Fire which seem to progress with some set of mood parameters. It will be interesting after these 16 tracks to see what will ultimately make it to our own definitive versions of Body Talk, especially if more songs are to come. You hit the nail on the head about her emotional side though--acoustic Indestructible is beautiful.

I'm sorry, but I LOVE Fembot. It's like Konichiwa but more Kraftwerk-y. Let us not forget The Girl & the Robot either.

Oh yes! Part one was to me a good CD single with some throway tracks but part two is much much nicer. If we follow the format of part one will we have a fully-formed Indestructible on part three? Not that it is not perfect already.

AMAZING - you are totally right...

I once spent a very long train ride in Sri Lanka not talking to anyone, legs hanging out the door of the train, world rushing past, listening to 'Robyn'

she = a musical phenomena.

Thankyou, as ever for being my musical barometer monsieur XO.

fembots a trifle? it's a fucking manifesto.

She's done that song like 3 times already, you konichiwa bitch.

But she did it best in "Fembots" you have to admit...

I like the idea of releasing material as it's ready to go, but i may be biased because I feel like Robyn is a year overdue for a full album. Having said that, I do love the full-album flow, and that's something that has been missing so far.