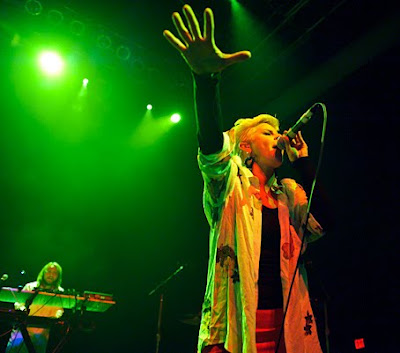 I was a lucky bitch to get into the Robyn and Kelis All Hearts Tour. These two women are hitting their apex in music this summer! Vinny Vero and I danced our way through one of the best shows of the year. So. 10 thoughts...

1 Dan Black, whose debut album Un is a sort of secret gem, was great. Super spastic and funny, with really strong vocals and a kind of guerrilla pop/modern rap/rock hybrid sensibility.

2 Kelis. Mile-long legs and a silver wig. Her performance was presented as a continuous-play DJ set, so it included a lot of segues and unexpected mash-ups (eg Milkshake with Madonna's Holiday) The covers were weird because she was often singing along with the artist of the original song, like karaoke.

3 Her set shined most when she played tracks from her near perfect album, Flesh Tone. It's an album I liken to Diana Ross' diana and it proved to be anthemic and storming in a concert hall. Big crowd pleasers were Home - the audience doing the oh-oh-oh -ohhhhhh parts - Fourth of July and Brave. Her "band" (one inaudible drummer and two deejays) did not provide the heft she needed. The songs rarely boomed as they needed to. Her voice and energy made up for it, but she needs a stronger backing in the future.

4 AND THEN CAME ROBYN. Simple staging - no set, just simple lighting from above. Loved the intro which was very techie, especially with the band in white lab coats - which, by the way, the cuter drummer shed, so he was bare-chested for much of the night.

5 Robyn is a firecracker. Incredible energy with a low center of gravity, so she pogos along in this very kinetic way. Like James Brown's tiny secret daughter (he had quite a few - it's possible). She launched like a rocket with Fembots (watch it) and never let up.

6 Dancing On My Own (watch) was played early and she did the arm waving choreography from the video, AS DID I (in my own head). The song sounded harder and fuller live - though sometimes her vocals were kind of deep in the mix - and has a fierce ending that extends the song beyond the recorded version. The chiming bits were more pronounced live as well.

7 Dream On. Another "chills" epic. What an amazing song to hear in a room packed the gills. It's about community and inclusiveness and all the things Robyn represents.

8 Don't Fucking Tell Me What To Do was played, though she did no live vocals for it - in fact, she did not even mime. SHE ATE A BANANA. I might have preferred Hang With Me, but it was a brilliant rock moment.

9 She also performed The Girl And The Robot, Konichiwa Bitches, and an amazing version of Be Mine that sounded like this. The only track I did not warm to? Who's That Girl.

10 The closer was, naturally, With Every Heartbeat. This song is literally the ultimate tears-on-the-dancefloor anthem. At the end, Robyn held up her hands in a heart symbol. She seemed delighted by the crowd response throughout the show and even Shirtless Drummer bear-hugged the other drummer - ohhh the mingling sweat - as they left the stage. Watch the NYC performance.
______________________________

Robyn and Kelis are not to be missed. The energy and fire of Robyn's live show came as a complete surprise (I'd been alerted, but was skeptical).
Posted by xolondon

SHE ATE A BANANA. Robyn's latest musical endeavours are really winning me over and I wish i'd made the effort to see her live now. And the Kelis album, I do keep returning to. I never seem to want to listen to it, but then sometimes i'm just drawn to it's power. That's a good thing, though i'm not sure makes any sense.

with the long hair? I noticed him during set up and thought "Oh to have hair like that."

I was at this show as well. Unfortunately I had to leave right after "Don't Fucking Tell..." to catch the metro. Car-less summer intern in DC, bah!

I was surprised how good of a voice Kelis had, I always thought she would be weak live. The energy of her set also surprised me, didn't expect that.

Nothing to say about Royn, she's as good as I thought she was gonna be and more.

I'm happy that I was able to catc this show.

I need to find the setlist to see what came after that. At least you got Dancing On My Own.

Feel like Kelis needs one hit single in order to get the $$ to do it right.