While we bemoan the high-profile floppage of recent Xenomania-produced tracks like Mini Viva's One Touch and Alex Gardner's I'm Not Mad, there is one new Xeno release that could make a dent in the charts if properly promoted. It's actually a perfect song for a tie-in with the (admittedly shiteous) Sex And The City movie.

Gabriella Cilmi's Hearts Don't Lie is 1) her best single ever 2) the finest Xenomania production in a long while and 3) the proper rebirth of Diana Ross' Love Hangover-era disco.

These discolettes certainly have their runway walk down, don't they? If you were unaware Cilmi had produced a video for this single, that's because her very wise label does not allow embedding of the blip on blogs. They 'd prefer the song be kept a secret from the Interweb because they use MTV as their video outlet. We all watch MTV, don't we?

The wailing chorus of this song is particularly appealing to felines, is it not? Below is mon chat's arms-aloft reaction to this song... 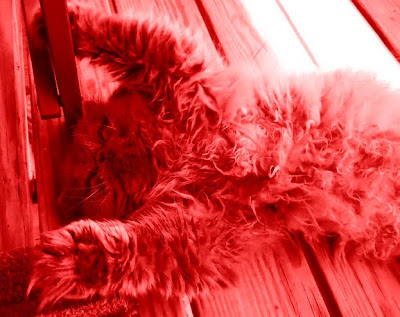 Thanks for this update.

I think we also need a hot-to-trot rundown of these Summer 2010 discotune contenders in a future post ploiiise.

Hearts Don't Lie is a hidden jem!
Not even a hit in Australia, damn shame, hope the UK/euro market pick up on it and gives it the success it deserves ..its SO damn good, peaking at #2 in May for moi!

absolutely loving both to be honest but gabriella clinches it for me, with her second amazing single from a brillo album :) Though I'm loving Commander more and more each second... Poor MV/AG

Allow me to recycle my recent assessment of this song from elsewhere:

You know how drag queens sometimes pick these left-of-center songs to lip sync to -- the kind that when you watch the performance, you're like, "Who the hell cares about this boring trash enough to pour their fat ass into a horrid knockoff dress and humiliate themselves for the 12 bucks in tips they're gonna have shoved between their knees?" Well, Gabriella will always have that, at least.

I like this song a lot, even if it doesn't quite scale the heights of the Kylie/Scissor/Kelis trifecta for me.

I LOVE that you included your kitty in this post. That's one cute, furry cat!

I like it, but it there's something missing in the delivery for me. The chorus just doesn't have the over-the-top delivery that "Commander" has for me. Maybe I'm missing something in the video clip, but her vocal seems to get lost in the mix a bit. Perhaps I would have a different opinion if I heard it on the dancefloor.

And sadly, I can picture a second-rate drag queen working it out to this. That's not a good thing for me.

As for the track? I'm liking it, but I prefer some of the others on the album - Very great stuff!

Such harsh words from some of you for The Cilmi! This song is kick ass. Maybe it's not Commander fierce, BUT...

Anyway, Kylie obliterates them all after hearing her megamix.