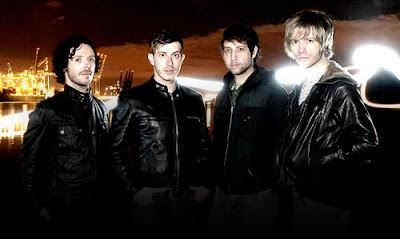 While other British pop bands just seem to be dying on the vine, Delays continue to put out album after album of good music.

Their fourth album has a pretty title: Star Tiger, Star Ariel. It's out June 21st and you can pretty much guarantee it will be lovely and alive. Greg Gilbert's voice is a treasure - I wonder if he sings to his momma at Christmas? Choirboys hotel all over England should pay attention - they too can have a rock career.

Here is their new single Unsung...

Brit friends, the band is touring now. See them at these dates over the next week...

My Delays time up to this point has mainly consisted of 1.) thinking "Valentine" is one of the best songs of the '00s and 2.) that's about it. "Unsung" has been working for me, though, certainly more so than "Hooray" did in terms of getting me interested in the album (which, you're right, has a great title).

I own their second album, so it seems now's a good time to revisit it for what I missed out on before--starting with where it overlaps with this list.

Mmm--scratch my earlier statement, as I do remember appreciating "The Earth Gave Me You," too.

This is turning into a very disconnected, stream-of-consciousness comment (as well as self-centered), but "Winter's Memory Of Summer" is playing now and it's instantly ear-catching. Maybe I just had to (eep) grow up a few years before I could appreciate some of their work.

You See Colours was one of the best albums of the decade, for sure. I'm dying to hear the new one, especially after some of the early positive reviews.

And I agree with PPG. Unsung > Hooray