You don't know about a girl 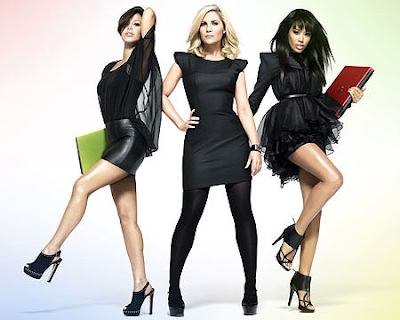 In a new Guardian piece on the new pop duo Mini Viva (well, it's really about Xenomania), producer Brian Higgins declares, "You can't sell an album in 2009 without an emotional connection." Probably true. But what happens when the connection is negative or dysfunctional?

Cut to the recent fan-queen fighting over at Popjustice Forums about Sugababes since the group polarized their fans by dumping their only remaining original member, Keisha Buchanan. This is one of the strangest pop music stories of 2009 and I am of several "minds" about it. Before I say one hot word, let me acknowledge this: I know it's just pop music. This is not the end of the world. But this is a pop blog and Sugababes are pretty high up in the pantheon.

1. We don't know what happened between them, but we have to assume there is a humdinger of a story that would lead to Keisha Buchanan being sacked just a few months before they released their seventh album. Anytime money and a "brand" are involved, there is a lot at stake and this group was already on the wane. Their use of mega American-chart producers like RedOne was a last ditch attempt to regain chart success, all under the guise of "evolution," much of it perhaps orchestrated by Keisha herself.

2. That said, the wave of dislike toward the new version of the group - 4.0 if you will - is somewhat earned. What's really happened is simple: the breakup of a long-loved group has caused strong emotions. There are a lot of fans who feel insulted by how the label handled this ("Let's just trade Keisha out and plow on"), as if theh 'babes fanbase would not notice. It's not so simple, is it? While fans have long been aware that Sugababes was not the happiest of groups, the recent news puts into question their whole facade. Why should we believe any of them get along? Should we care?

3. I thought the Keisha version of About A Girl (see below) was epic. A masterstroke of merging (crass, but necessary) hit chasing with a group's trademark sound... and coming out with a winner. Lightning strikes! And now? I. Could. Not. Give. A. Shit. If it were up to me, the label would shut down Sweet 7, record some new songs with new member Jade and relaunch it under a new album title in summer '10. I'd let them keep the group's name only to keep the ship from sinking completely.

Personalities in a group actually matter and music executives can't really afford to gamble with their established audience. It doesn't matter that Jade Ewen, the "new girl," won a contest or "tests" well or even sings well. Fans have rolled with member changes before - any group that can survive the loss of a vocalist like Mutya Buena deserves credit. This one too many changes, it's bad business and even worse karma.

Sugababes About A Girl (Keisha version)

Email ThisBlogThis!Share to TwitterShare to FacebookShare to Pinterest
Labels: Sugababes

I have no dog in this fight, because I have only known them from the fringes of their fame. To me, it just seems like they should hang it up, but with Jade having put her career on hold, that would be a bit of a waste. Let's see what comes out of the US launch.

Maybe I don't have the right to comment as an American fan watching this totally from the sidelines, and you raise a number of good points, but ultimately, if the group cannot work together in a positive manner, this was the only choice. Keisha is free to start her own solo career if she would like, and many fans would follow her if it is a good project (unlike what many would accuse Mutya of putting out there--why wasn't it more like that Groove Armada duet? She is very talented though.)

You are right that it really should be about the singers more than the name brand, and if the singers can live up to the name, more power to them. I feel bad for Jade being thrust into a hostile situation like this, but honestly, she seems to be gelling with the other girls better on a personal level, and it was apparently bad enough that they felt it necessary to make this tough decision. It's also a bit telling that the original three Sugababes seem to have passed on the opportunity to reunite as their own group. THEY don't even want to work with each other.

Yes to all of that!

This is great commentary. I agree 100% and I literally couldn't have said it better myself. As a fan, I learned to live with the departure and replacement of Mutya, but Keisha's mysterious sacking is such a massive slap in the face to fans it just feels unreal. How do you think Siobhan, Mutya and Keisha would have reacted had someone told them when they first started Sugababes that 10 years down the line there would be 3 different girls singing under the same name?

This is a really great analysis, XO, and you really hit the nail on the head when you say that personalities in a group really do play a big role in creating a bond with fans.

I'm with them until Heidi and Amelle are gone.

Heidi and Amelle have always been my favourite member but since the dumping of Keisha - I haven't been able to bring myself to listen to their past material bar a track every now and again. It was also saddened to come to the realisation that I prefered the Jade version of About a Girl over Keisha's.

I guess I'll quietly observe 4.0 over the next few months to see whether I'll continue the ride or jump off the Suga-Train.

My (unpopular) opinion is that that they have not had a musical identity for a long time anyway so it doesn't really matter which three random women they employ to sing the songs.

Having said that I do love their first album and some of the stuff from the next few years after that.