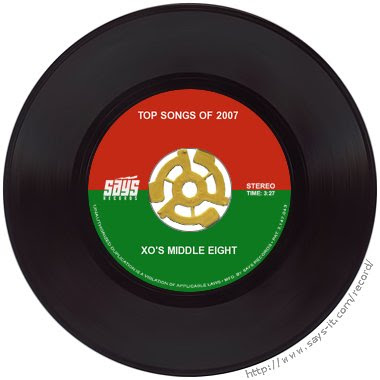 I can't even tell you what happened in 2007. Very little and that was actually a problem, which would be remedied over the next two years in ways good and bad. One thing I do remember: starting my "relationship," as it were, with Instinct Magazine by interviewing Rufus Wainwright, who was funny, chatty and endlessly quotable. Always choose Mr. Right to break yourself in. Check out more of my 2007 favorites.

1 Let Me Know Roisin Murphy UK SONG OF THE YEAR!
From my own CD review: "Everything is right here: the step step step hook on the chorus, the soulful intro and a vocal that is far more beautiful than most pop songs deserve (especially at 2:08: I don't belong to you, like you don't belong to me / So don't hold on too tightly...)."

2 Casey Darren Hayes
Everybody has a real Casey and I had several They know who they are. What I said in my CD review: "Darren has the time to allow the 6 minute+ track to slowly blossom with longer instrumental passages. The bass beat doesn't really come in until minute 3. The song is divided into sections and when you think it's about to end at 4:43, along comes a beautiful synth coda that adds to the grandeur." That part with the beat (2:52) still gives me chills.

3. Redeem Me Marc Almond
Can you think of a better comeback song than this? Every single OTT element is perfect. This was a collaboration with the incredible Marius Devries.

4. 1234 Feist
Apple almost overexposed this in their commercials. I most love the section with the horns toward the end - it makes me so happy. One of the best videos of the 00s too.

5. If I Called You On The Telephone The Revelations
Poor girls never got a proper CD release or even an album cover! Whatever, they had several great tracks on their CD, but this girl-groupish boomer hit the sweetest spot.

6. Up Country Mancini
Although Mancini never released a second single, this was the driving song of the year.

7. Umbrella (Jody den Broeder Lush Radio Edit) Rihanna
I could never listen to the original after hearing this mix. I love the chorus lyrics, especially the bit about "Took an oath, I'ma stick it out to the end."

8. It's All True Tracey Thorn
Tracey surprised everyone with this song being so "pop." Most expected icy club drama, which the album also had, but here they got the sweetest love song ever, circa Madonna 1983.

9. Wow Kylie Minogue
Take Kylie's best musical elements and whip them into a frothy 3 minutes. Explosive would be a good word for this song. .

11. Medevac Siobhan Donaghy
I imagine this could be done hard live. Massive and metallic. I fucking love those diving synths that come in at 2:30 ish. Help me out here, coz I'm strung out.

13. Between My Legs Rufus Wainwright
From my review: "If fans are going to have a Big Gay Moment on this record, when they finally lose their shit and start running around screaming, the last 90 seconds of this song - complete with Phantom Of The Opera crescendos - are sooo it."

14. Augustine Patrick Wolf
Elegant, eerie, wise and passionate. Still love that bit at 2:54 where he asks, "Well, is it?"

15. Stop Ghosts
Title should've had an exclamation point on it. This Britpop song unexpectedly took me to a Culture Club-circa-1983 moment. Glorious and uplifting. Thanks to Torr for this one.

16. Extraordinary Mandy Moore
I fell for Mandy's empowerment schtick wholeheartedly, but her 2009 follow-up - total crap - killed the momentum she built in 2007.

17. Better Tom Baxter
At the time, I said "Why isn't this love song at #1 yet? It may still get there." It never did, but Boyzone did a much-loved and faithful cover of it a year later.

18. Gravity Sara Barielles
I was obsessed with this perfect ballad in summer '07. I would wail at stop lights, scaring other drivers. We all know what happened. She became a huge star... and a worthy one.

What almost made it.Mark Ronson w/Daniel Merriweather: Stop Me If You Think…, Mika: Relax (Take It Easy), Siobhan Donaghy: So You Say, Sophie Ellis-Bextor: Can’t Have It All, Sarah Nixey: Endless Circles and Suzanne Vega: Ludlow Street. I played the hell out of Antigone's uberballad Life Without You (among others), but it didn't come out officially until 2009. Also, Robyn's With Every Heartbeat was on my 2006 list, so I didn't repeat that one.

Great post. You know how I feel about Roisin. We know she, Tracey Thorn, and Darren Hayes are about to release new material. Will Siobhan Donaghy though? Her album was so elegantly sophisticated and enjoyable--shame about the sales figures--she deserved better.

Hard to believe it's been 2 years since Kylie's X was properly released.

Thanks for breaking me out of my boredom at work on a frigid December night.

Definitely on board for Kylie, Tom Baxter and Mika (though I may be the only one still on board the Mika express!!) - 2007 was an odd year for me, I was going through that weird blog phase where I featured nearly everything anyone sent to me in an enthusiastic style and 90% of it was solid gold shit!! Still, a couple of pop acts remain from that year who I adore. Plus I met you!!

Great list that brings back some great memories (and a few bad ones, too). I still feel regret for having written off "X" initially, because that grew into a classic over time.

I was disappointed that Mancini never did anything else. Loved the single.