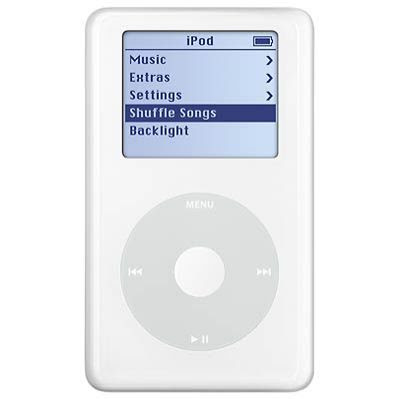 The Year of the iPod. I got my first 20G this summer, just in time for a deluge of great pop music. In 2005, I did two lists - one that was the "general" best of the year and then another was more hardcore pop. I had a four-way with four women for favorite album: Goldfrapp, Imogen Heap, Madonna and Rachel Stevens.

Imogen Heap “Goodnight And Go” SONG OF THE YEAR
The song of all of these that veered closest to my life. I'll leave it at that!
Goldfrapp “Number 1”
80's electropop number - this is a Perfect. Pop. Song. Great video too.
Mark Owen “Believe In The Boogie”
Take That cutie creates one of the catchiest indie-pop-rock songs in '05
Depeche Mode “Precious”
Silvery, gorgeous, and sad sad sad. One of their Top 10 songs. Ever.
Athlete “Wires”
Another sad one about children - in this case a sick baby in a hospital.
Kubb “Wicked Soul”
Dirtiest song of the year, yet not vulgar, from a band who disbanded soon after. I'm the weirdo in your bedroom.
Patrick Wolf “The Libertine”
This track the The Shit! In a right world it would've been a rampaging hit.
Martha Wainwright “Bloody Motherfucking Asshole”
Best line: Poetry has no place for a heart that's a whore.
Sufjan Stevens “Chicago”
All things Soof-yon in one song, but accessible to the masses.
Sia “Breathe Me”
The final minutes of this song are epic. Drive on Claire Fisher.
Michael Buble “Home”
A cheesy ballad that still makes me so happy to sing along with.
Mariah Carey “We Belong Together”
One of Mariah's finest moments. Another great singalong and the song o' Summer 2005
Madonna “Get Together”
Surely it's Holiday '05? Madonna fully realized in one song.
Goldfrapp “Koko”
As if Gary Numan met Kate Bush and made sweet love to her.
Imogen Heap “Closing In”
For the "what are you like" part and that drum attack in the middle eight.
Kate Bush “Nocturn”
Kate fully realized in one song. The epic we waited 10 years for.
Rachel Stevens “I Will be There"
Awwww, this song is so fucking pretty on the chorus. Viva Rachel.
Eurythmics “I’ve Got A Life”
Eurythmics fully realized in one song! The disco strings make me run around the room.

As I said above, 2005 was truly the Year Of Pop. I could not keep up with all the genius music arriving from Europe. Not even trashy good - all are top tunes, total quality. It was also, for me, the first time the music coming out of Sweden and Norway really influenced me - this is attributable to other blogs and sites like PopJustice.

Here are some of the songs I had on my second list of pop favorites..

Girls Aloud “Biology”
3 songs in 1! At the time I said "Will become a legend, this song, especially because a lot of people hated it when it came out. So THERE bitches." So wise, me.
Rachel Stevens “So Good”
Oooh Ooh Ooh Oooooohhhhh. The most dissed artist of 2005, who deserved nothing but praise.
Bodies Without Organs “Sunshine In The Rain”
London, Berlin, Rome... I love songs that name-check European cities.
Lisa Loeb “Fools Like Me”
'04 leftover. All about the backing vocals in the last 30 seconds.
Sugababes “2 Hearts”
Viva Mutya. To paraphrase, everything about (this) makes me glow, I thought you should know.
Rachel Stevens “Nothing Good About This Goodbye”
Insanely catchy chorus on this Alexis Strum-written midtempo.
Lorraine “I Feel It”
I said "The Keane of 2006?" We know how this turned out. Frown.
Will Young “Who Am I”
Elegant, smart breakup ballad.
Alexis Strum “Bad Haircut”
Alexis herself created a worthy, melancholy mid-tempo ballad. Should've been a hit.
Simon Webbe “No Worries”
Uplifting in a VH1 way, this song is made by the female backing voice.
Madonna “Jump”
Classic Madge track, with nice spoken word bits.
Annie “Heartbeat”
Smart dance pop. The final minutes of this thrill me, trill me, drill me...or whatever the fuck she is saying?
September “Cry For You”
Looks like Sienna Miller, music like Madonna circa 1986. Europop heaven...
Girls Aloud “Whole Lotta History”
GA create a classic (retro) megapop ballad. Their best ballad still.

Take a look at my best of 2005 lists, if you care!
Posted by xolondon

Ah, bliss... visions of the old school iPod! Good work mate. God I fucking love Rachel Stevens' "Come & Get It" album... 'Nothing Good About This Goodbye' was my alarm ringtone at one stage :p

Another great round-up. 2005 was the first year I actually started saving my lists, although I had no blog then. Here were my 10, as you won't find them anywhere else:

-(the next 10 included Imogen, Rachel, and Erasure/Andy Bell. My significant other chose Imogen(2), Madonna(3), Annie(5), Goldfrapp(7), and Rachel(9). I think if I were to do it again, Annie would place much higher. I loved those Sia and Eurythmics songs as well. Goldfrapp was an uber-masterpiece though--think I'll listen to it tomorrow...excited about the new one in March!

Poor Rachel Stevens' music career. Love your choices for her. Both gemzz

If anyone cares, I've assembled a spotify playlist of the songs available that you've listed up until now:

Yep. It was released like 3 times or more. There were two early online indie releases: I Feel It and Saved. The CD single came out later.

Oh Si, just aw your comment - that is cool! We don't have Spotify in America and - I say this with some knowledge - the American labels are quite disdainful. And full of shit. It may still happen though.

I'm so glad to see so many Rachel Stevens in there, Come & Get It is one of the best albums I have. It's perfect pop and Kylie should be hitting herself since 2005 for not having recorded this.

That sums up 2005 well enough for me. 2004 had lots of dance-pop, but 2005 really peaked in its second half with darker or more delicate stuff. To me anyway.

I would add Ladytron's stoic mianthropy of Destroy, and in particular Arcade Fire's Rebellion (Lies). That was a great winter music-wise.

As if I didn't wish we had Spotify already...this list has really left me wanting to go listen to some of these songs, and a Spotify playlist would be perfect. YouTube/iTunes, here I come...

Looking at this list really does make you realize how great a year that was.

SUCH A GOOD LIST. Imogen Heap, Sia, Will Young, Goldfrapp...such a great year for music. Especially loving the shout-outs to Rachel Stevens. Can a pop song get more perfect "Nothing Good About This Goodbye"?

Another great list - in a year with I Said Never Again, Switch It On and Biology, plus Madonna's album how can one complain? Also! I met Deborah Gibson and got to go to an intimate concert of hers (tiny! 30 people!) which as Darren points out, aren't all her concerts like that nowadays? (Rude)!

Great list! Goldfrapp rocked my 2005 world, as did many of the other artists here, mostly Madge's Confessions tracks. "Get Together" has aged well. And yes, Buble's "Home" - still a fantastico track.