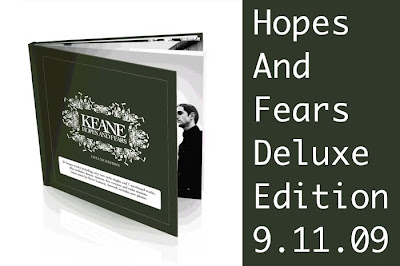 A 2 disc, 37-track "Deluxe Edition" of Keane's first album, the perfect Hopes And Fears, comes out on November 9, 2009. I often wax rhapsodic on hearing my (still-to-this-day) favorite Keane song, Your Eyes Open, while lying on a hotel bed in London in May 2004. Some details on the release:

In addition to the original tracklisting, this album showcases previously unreleased and rare material including early demo Into The Light, recordings from the band’s earliest Steve Lamacq and Jo Whiley radio sessions... and their debut self-released singles. The sleeve notes have been penned by long-time supporter Steve Lamacq.

Though it includes the beautiful song (Snowed Under) that spawned the album's title, this collection is also notable for what's NOT included. The Hopes And Fears singles were famous for b-sides that, in many cases, were stronger that album tracks. Sadly missing are Snowed Under's companion piece, Walnut Tree, as well as To The End Of The Earth, Fly To Me, Something In Me Was Dying, and She Opens Her Eyes. Interestingly, the superb DJ Shadow remix of We Might As Well Be Strangers is included.

The full tracklisting of the Deluxe Edition is Keane's site.

That's a surprise if there ever was such a thing! This is one of my favourite albums of all time.

How can they call this deluxe when it is missing all of those tracks. I feel fortunate to have purchased at least 5 of the 7 tracks you mentioned on official CD singles. Hopes & Fears is their best album, as they had several years to write it.

This album made me fall utterly in love with Keane and it's a love that still lingers despite being disappointed by everything they've done since (that's a bit unfair - they've done some good stuff, but nothing has lived up to this album yet).

Wouldn't it be great if the new Will Young single was actually an entire cover of this album!

What? No Ends of the Earth? Lucky I bought the singles already.

I may have to get this. Hopes and Fears is one of my favorite albums. Thanks for the info.