Don't give it up Siobhán Donaghy 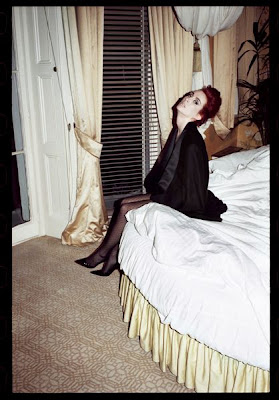 She's the real deal, a pop artist who really wants to make art. And she makes a fair (and fantastic) point that her brilliant album Ghosts - my 2007 Album of the Year - seems to foreshadowed Florence and the Machine and Bat For Lashes. And she is recording something, though it's not discussed.

There is comment I take issue with. Her simplistic belief that Sugababes are...

...just three people that will be maneuvered by the people around them. That's why I can never look to their success and admire it or want that. Whatever producer they work with, they sound like.

I'd actually say the Babe's voices override the various styles they try... no matter what Sugababes do, it's recognizable as them. So why does Siobhan have a go at them? Aside from having different musical goals, she says:

[Keisha] never wanted me in that band and made my life a living hell. It’s funny... all these years on, I’ve grown up and I’ve left it all behind me and I’m not bothered by it... I like to think about the good things in life, always focus on the positive, and Zen and all that shit. But I’ll never forgive her.

UPDATE: The song she mentions, Questa Notte, recorded by Ludovico Einaudi on piano, is really beautiful. You can find it on iTunes.

I love Siobhan but the Sugababes digs are petty. I agree with you about their voices being the key.

"But I'll never forgive her."

I must admit that, out of all the hundreds of albums I have heard in the past 2-3 years, I keep going back to Ghosts. Ironically, I just listened to it again last week in its entirety. What a beautifully odd pop album it is, and as beautiful as the musical arrangements are, Siobahn's personality consistently transcends the music. Thanks for this article...I am so glad to hear she is working on another one. Maybe this time the label won't screw up the release (whatever label she ends up with).

The Sugababes digs don't really bother me. Isn't it obvious? I think there comes a time when an artist should feel free to speak about such things, and she has been free of the machine for nearly a decade now. Maybe she & Mutya should do a duet. Great photos as well!

She's not wrong though, not really. Her old band are pop puppets (or if polite I would say producer chameleons) and it's not as if she's always going around slagging them off like many of those less dignified 'celebrity' types.

Looking forward to whatever she does next because both of her albums so far have been at the top of my year lists.

The Sugababes definitely do seem to just adapt their sound to whoever they are working with. I agree with you, XO, that their voices do make it distinct though.

I really haven't invested enough time in ms Dongahy as I perhaps should have - can you recommend any decent start off points?

I need to revisit 'Ghosts'. Paul, the WHOLE album is a real treat. Very Cocteau Twins-esque...which is never, ever a bad thing.

Paul, there are two slower songs, So You Say and There's A Place that you might like. Maybe Don't Give It Up too? Not sure!?

It is so exciting to hear that she is working on new material! Ghosts continues to be one of my absolute favorite albums. Since she says that she won't record another album in that style, I am very curious to hear how her sound is evolving!

As long as she does not do r'n'b I will roll with it. EVERYBODY goes r'n'b!