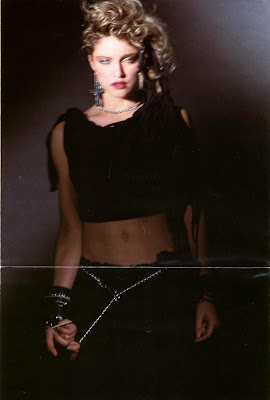 Earlier this week I saw a paparazzi photograph of Madonna that was captioned "Madonna with Jesus at the airport in Zaragoza" and though to myself "You cannot make this shit up." Aside from posts about her Cryptkeeper arms, the blog/Twitter world is whipping itself into a particular frenzy over her upcoming single, Celebration. The track looks like a terrible idea on paper until you hear it via a shitty cell phone rip played in Ibiza and have a near-mental breakdown thinking you cannot leave your house until this song leaks. Or maybe normal people do not react this way?

New York Magazine's Emily Nussbaum just published one of the most spot-on pieces on Madonna that I've read in years. It's something many fans hovering around 40 will relate to. She really nails it in numerous key points:

Over the years, this vision of discipline as transcendence crackled, hardened, becoming at once awesome and alienating, creating a riddle for fans: How to reconcile that early Madonna with what she’d become?

I try to persuade myself to admire her most New York qualities (ambition, workaholism); I tell myself she’s a dancer, and this is what dancers do. But I feel exhausted just witnessing the effort it must take to maintain this vision of eternal youth. This didactically selfless Madonna is less inspiring than the selfish one in so many ways.

It goes on, but she hilariously nailed my favorite: the Ideal Brunette Madonna saving Black Jesus in that incredible slip. You know, when she sees the guys attacking the girl and juts out her jaw at them in defiance? With her awesome hair flying around? (watch for that bit from 2:29-2:50).

But finally, it must come back to her music. Nussbaum quotes writer Rob Sheffield on her lasting legacy:

As for Kabbalah, he points out, “You know, if she made bad records about being spiritually awakened, that’s one thing—but she made a really good one, the Ray of Light album.”

It's easy (and knee-jerk) to write her off after last year's weakish, irritating Hard Candy, but Celebration sounds like another milestone in a career that is unparalleled in pop music. One epic after another. If a Hits record closes a chapter, where does this story go next?
__________________________________

Be sure to read Justify My Love by Emily Nussbaum in New York Magazine, July 26, 2009

In response to your question about where the story goes next, who really knows? I'm not sure even Madonna knows. What *I* hope for is that the rumors of yet another tour next year are untrue and that she focuses on recording a brilliant new record.

But who knows. She came closer than she ever has to losing me with Hard Candy. If I can survive that, I can take just about anything.

Regarding your last paragraph, the new song Revolver may push you to your limit (if word is true).

honestly Celebration sounds like an "already been there done that" version of Confessions.

or i mean Celebrate

I alluded to this in my recent post, but obviously Madonna has set the pace for most of the 27 years of her career and has really set the bar when it comes to evolving and trying new ideas. Most worked, some didn't, some shocked, and some were brilliant. That Lady Gaga seems to be trying awfully hard to shock and be different so many times already in just one album is both a tribute to Madonna and ultimately almost a ridiculous parody of how to have Madonna's media career in 3 singles. Celebration sounds great. Who knows what the future will bring, but she has this massive fanbase that has grown up with her that is unlikely to abandon her now.

What an excellent post! If you'd asked me a year ago, I would have said her exhausting battle for relevancy had finally consumed the quality of her work. Listening to the snippets and LQ recordings of the new single, I can happily declare she's still got plenty of fight left. Here's to another smashing single (and many more!)

I'll never be able to write an article on Madonna after reading that perfect one quoted here.

xo, I actually loved that article you linked. sent it to my Mum earlier today and she (also a big Madonna fan) adored it too.

Loved what you said about the new single as well. "...and have a near-mental breakdown thinking you cannot leave your house until this song leaks. Or maybe normal people do not react this way?" Ha. Normal people. Apparently not! Oh well, it's them who are missing out!

I see you've joined the ranks of people who were initially quite positive about 'Hard Candy', turned on it when online opinion hardened against it and now are won over by a return to poppers-o-clock dance despite now complaining about 'Hard Candy' not being original or 'different'.

I think I prefer it when you just make fun of her face, it seems to be more appropriate to your leve.

I prefer you passive-aggressive, love-hate posts when you mock her for being old like in this post here:

And not that one where you're all red and and yellow and I can't see you very well.

Since the last two comments are from one person (xo UK!), I'll answer once. I never liked Hard Candy that much. I was pretty clear about throughout 2008.

That post you linked to was not mocking her age. Read it again. It was noting the difference between her glammed up public persona and her private one. No one has to look divine 24/7.

You fail to notice I am actually a longtime Madonna fan, from the start. I am not thrilled with her recent choices; bully for you that you are!

I am, however, BOOHOO SAD that you don't like my little photo!

I love it when gullible Madonna fans like SummersEve72 take the bait and blindly defend that old hag, as if she herself even cares. It makes the Internet so much more fun.

I'm proudly 40, and have been an equally proud Madonna 'fan' since 1983 ("Burning Up" totally seduced me, and there was no turning back. Ever!). I have accepted that she's not perfect and that she'll release the odd dud record, the odd ok movie, and the odd boyfriend/partner choice. Her private life rarely mattered/matters much to me. It's been her musical output; the obvious love of music and performing (someone like Britney leaves me cold; I can barely muster up what seems her total lack of music appreciation in her output).

It was Ëvita that left me totally cold, so "Hard Candy" was a tiny blip on the Madonna musical landscape. Her catalogue is outstanding -- most of the wannabes these days will have a hard time living up to her legacy.

I can't believe the bile people are willing to spew in defense of their chosen one, especially when the recipient of the attack has defended same said icon on several occasions when they really didn't have to.

I thought Hard Candy did have some pretty great songs, but, for me, they were buried in some lackluster arrangements and production that brought very little in the way of "new". Madonna had become an artist who was always bringing new (William Orbit, Mirwais, Stuart Price), so turning to Pharrell and Timba seemed lazy. But like I said, there were some great songs like "She's Not Me" and "Heartbeat".

I saw a post earlier today where, out of all M's albums, somebody dissed Ray of Light (the album), and while I disagree completely with them, I would never lash out on a personal level.

HA! Summerbreeze 22 gave me quite the bright-morning chuckle.

I don't wish to 'take sides' here, but I must say that surely by writing this public blog xolondon is as inviting of 'bile' as any of the celebrities that he ever personally attacks?

Sanjayfreda, that is true in the sense of my writing and I accept that. This has been blown way out of proportion - this blog is not known for "personally attacking" celebrities. I'll engage in a debate over my - and this is key - ideas.

This is not a blog about me. In this case, I am interested in whether or not people liked Emily Nussbaum's piece on Madonna?

Clearly, we all love and respect Madonna or else why would be bother even reading this posting. Let's not lose sight of the big picture.

I enjoyed this posting a lot XO.

I agree with countpopula, Madonna gets lazy (Pharrell/Timba) and dials in the electronica maybe a tad much. I think it's almost defining her. I heard she's working with Malina Moye (singer/guitarist). I saw her with robin thicke in atlantic city. She was better than robin. http://www.youtube.com/watch?v=ojC8Re59TzA

Maybe Madonna is bringing back musicians into the fold again. It'll only help. I love Heartbeat tho.

Madonna would benefit from the change-up to working with women. WHERE ARE the female producers. Sexism is rampant and she could kick it in the ass.

ah that woman became dead to me after the aural suicide/slice of frozen-in-the-middle pop-poisoning that was 'Hey You.'

erm... I know it was for charidee, but I think that even the most philanthropic of souls would just be like 'erm actually don't worry about the song... here - have the money! no REALLY TAKE THE MONEY'

I was going to type some of the lyrics... i've put it on spotify... but am now feeling a bit sick.

Bad. Bad. Bad - and Pharrell PHARRELL WHAT WERE YOU THINKING.

lord knows I adore ray of light and most earlier stuff, half of music... but since then, confessions was clever for about 2 weeks (abba sample - genius) then hard candy was just stringy-bondage-granny-chic gross. pas bon.

New song though? Old school, v mr oakenfold, doesn't make much sense, but if its in your head while you fight with the attendant at the local petrol station whilst trying to buy chocolate... it must have merit, its dancefloor gold.

(my word verification is the word 'Grecesse' whats one of them then? horrible mental images, christina milian being one of em.)