Has it come to this, Sharl? 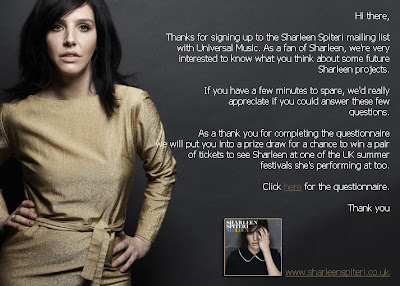 We've all heard of test marketing in pop music, but I've never seen something so blatant. Poor Sharleen Spiteri. Her record company is polling fans via mailing lists to decide what trashy covers album she should do....

The depressing part? How cynically trite the options are. Do we need another Dusty Springfield covers record? What about the "Celtic Song Book" album? Since when is Maria McKee's Show Me Heaven considered Celtic? At least there was no Carrickfuckingfergus. And can you hear Sharl warbling I've Had The Time Of My Life? How demode is that?!

It's a long, hard fall for the same artist who recorded Say What You Want and Summer Son. Bring back the woman who recorded an album lying on her back in the studio...

Click on the image above if you want to partipate in this travesty...

Email ThisBlogThis!Share to TwitterShare to FacebookShare to Pinterest
Labels: Sharleen

What a travesty. White on Blonde is still a fantastic album, and I actually quite enjoyed Red Book. Her solo record was pretty deflating in the sense that it was mawkish copying. Can't she just do another original album that pushes her sound forward a bit? Some of these choices are HORRIFYING. Most of these songs have already been done to death on shows like American Idol, etc.

I received this questionnaire by email and stared in disbelief! how to bring a perfectly good career to it's knees. if i was miss S i would be going nuts with the record company...what next cabaret on cruise liners???
(ooops! I shouldn't give those darn record executives any ideas - SS.Spiteri now sailing)

Needless to say I didn't fill out my questionnaire ;-)

I couldn't believe my eyes when I got the survey either. Record companies really are shameless and try to squeeze every penny out of artist which they can.
I believe an artist like Sharleen doesn't deserve this. Give her the time and freedom to write her own songs which we all know she can. Otherwise she wouldn't have written million sellers albums like White On Blonde, The Hush, even her solo album Melody and certainly wouldn't have received an Ivor Novello award.