I didn't see this coming. So to speak... 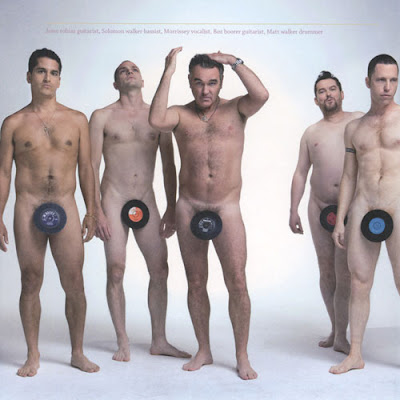 From the 7 inch (bada bing, the puns roll on!) of Morrissey's new single.
Posted by xolondon

I actually find it pretty hilarious. I love that Morrissey has a sense of humor. Something folks so often overlook. Would have made the perfect sleeve to "Striptease With A Difference".

I want to know how the records are being held up? Not the obvious way.

How did he get everyone to do this, especially Boz Boorer, who looks like he could lose a few (I know I'm not one to talk, but...)

Rather shocking cover for such a simple and beautiful song. Maybe an odd choice, but funny nonetheless.

I'm sure there will be many jokes like--'looks like Moz needs some tanning lotion', 'some of them could use some manscaping', and 'who let Eric Cartman in the band?'...

Will it come as a USB stick?

You did not see the hairy butcrack?

No,I don't have that album.

Paul Andrews made a crack on my Facebook about the cover of the 12" single.

Gosh I'm embarrassed to admit -
I SO WOULD!

I was amazed with it but now I'm OK by myself

How did ya miss that butt shot last year?

I love this cover. For all the wrong reasons. :p