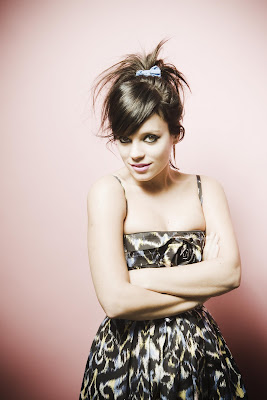 Stream samples of Lily's new record It's Not Me, It's You:

Email ThisBlogThis!Share to TwitterShare to FacebookShare to Pinterest
Labels: Lily

Beat me to it!

This may be even better than her debut. Not quite so specifically English, yet retaining enough cheek to translate across a wider audience. I will say her singing has improved DRAMATICALLY and I love Greg Kurstin's production--an interesting choice when she could have gone right back to Mark Ronson. Funny how Kurstin's band, The Bird & the Bee, is releasing its new album two weeks prior. That is also a very good record, but more on the artsy side of retro-electro pop. There's a great track on it called "Diamond Dave" about teenage love for the Van Halen frontman. 2009 is already looking better than 08!

Can't wait for this Lily though. It's pop genius!

Somehow captivating. A second record of sunny cheery singles would not have worked, and she knows it. Smart move.

Possibly exactly what I was hoping for?

I cannot WAIT for this record.

I guess I'll play the bad guy. I wasn't overly impressed by the sampler and these tracks are kind of such a departure of the unpolished Lily that I grew to love.

And I don't think the first album was chock full of sunny, bright singles at all. They were tongue-in-cheek and with a bit of a wink.

While I love Greg Kurstin, I'm not sure I like them together. Perhaps when I have the entire thing in front of me, I'll change my mind.

I'm not saying 'no,' at least not yet. But I'm not as sold as I was with her first effort.

I should note Kurstin did Alfie, Not Big and Everything's Just Wonderful on the last CD. People associate Ronson with her, but he only did one song.

Can't wait to hear Back To The Start in full length.

I've been chomping at the bit for the new album ever since 'The Fear' appeared on Lily's myspace page as 'I Don't Know' last summer. I was so impressed with this song that it made me investigate her 1st album which I'd previously ignored and it won me over. Based on the samples, I'd say the new album is going to be even better. Absolutely can't wait. Woo-hoo!