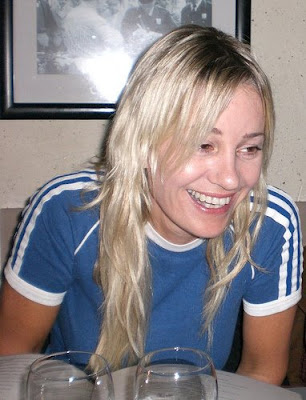 Siobhan Fahey turns 50 today. Siobhan is my favorite Bananarama girl and, for me, the group ceases to exist with her departure*. In fact, El Marveloso and I talked about how I only care about the first 3 'Nana albums. I don't even like Wow (scandalous, I know).

Some tidbits: In her bio, Siobhan says that Robert DeNiro's Waiting was originally called Al Pacino's Waiting. The girls were taken to dinner by DeNiro when he heard about the song. She also calls producer Pete Waterman "authoritarian and misogynistic." Be sure to check out the comments for this post - D'luv quotes Waterman on Siobhan.

Siobhan left Bananarama in 1987 and formed Shakespears Sister (sic), named after a Smiths song, with the amazing Marcella Detroit. Read about them here. They had several hits including Stay, and I Don't Care and the group remains a kind of indie pop classic. Be sure to check out French & Saunders take (Dickens' Daughters!) on the group, with Dawn French portraying Shuv. I should also note that current group Dresden Dolls ripped their look off of Shakespears Sister - the evidence is everywhere.

In the late 80's, Siobhan befriended video director Sophie Muller. Both Siobhan and Annie Lennox were Gwem Stefani long before Gwen! In fact, Sophie had both Siobhan and Sade running around in wedding dresses before Stefani did it.

I think Siobhan is more of a rocker at heart, both vocally and how she presents herself visually. I love how she looks in the 1996 video for I Can Drive. You have to love that she recorded a song called Opportunity Knockers for the final Sisters album, #3, which was released years late, in 2004. It sounds like Courtney Love doing pop.

Siobhan's most recent single, Bad Blood, was a bit ragged and punky and she's had an album in the works for a few years. Honestly, I'd rawwwther she reunite with Bananarama and do an album with, say, Xenomania, Stuart Price and maybe Lucky Soul, but that's beyond unlikely.

My Top Ten Plus One Bananarama Songs:

Cruel Summer
Robert DeNiro's Waiting
Trick of The Night
What A Shambles my #1 favorite
Wild Life
Young At Heart
Rough Justice
T'aint What You Do, It's The Way That You Do It
Cairo
Cheers Then
...and how about one Shakespears Sister song, 16th Apology

And yes, yes, yes, Happy Birthday Joanna, who once shared a hairstyle with Siobhan! Here is XO and Joanna (post Shiv hair) at 17 and 18 respectively.

*I actually like Bananarama in its current Keren/Sarah incarnation. I'd just rather it be the full trio again.

What an interesting solo career sound!

It's like '90's Fiona Apple going a bit Shirley Manson.

I think i sort of love Siobhan after that post... though i do like me some 90s nanas. True story - darren is obsessed with shakespears sister. Loves them!

The French & Saunders...HI-LARIOUS! Even funnier if you remember the video back in the day. I don't know which was better...this or the Amy Winehouse/Britney spoof!

Happy birthday Siobhan! You will ALWAYS be younger than Madonna! ;)

The ball and chain's co-worker has a friend who does Shuv's hair.

I love the cute and candid photo atop of this post.

I love "WOW". Such a fun gay album. I do have to say, when SAW started working with the Bananas, it was the first time they actually had vocal harmonies!

LOVE Shakespears Sister. The French & Saunders' skit provided me with one of the biggest laughs of my life. You have to know the original video to appreciate it.

Sister's "#3" was a good album. I can hear how the tried to get a Marcella sounding vocal in there.

I from various interviews, I heard the Siobhan is very difficult to work with, but she's history (historical).

Just for a good chuckle...

From Pete Waterman's autobiography, I Wish I Was Me:

"Siobhan had amazing talent, but could be difficult to work with. I got on with the other two in the band really well, but there always seemed to be conflict between Siobhan and me. I still think it was her fault, but then she'd probably say it was mine....

"When we been finishing the Bananarama album [Wow], we'd got stuck on one final song and couldn't think what to write. Then one day I was walking past the TV and saw a preview of a program called 'Strike It Rich.' It triggered off the idea for a lyric, and I came up with 'Ain't life a bitch, you gotta keep on working 'til you strike it rich. We used that as the hook for the final song.

"Then Siobhan announced she was getting married to Dave Stewart. There were fantastic ornate invites and the two of them chartered their own jumbo jet down to the wedding reception in the South of France with people like Bob Dylan appearing. They'd spent thousands and thousands on it all. I said to Siobhan, 'That's a big gauche for socialist, isn't it?'

"There was no way Siobhan wanted me to come to her wedding, but I was still going out with Hilary, their manager, and so obviously they wanted her at the wedding, but they didn't want me there. I got a grudging invite, but I was busy anyway, so I didn't go. It was probably just as well.

"One day I was in the studio and the girls came in. Siobhan had the most fantastic, expensive bracelet I've ever seen. It was a beautiful piece of jewelry, which must have cost an awful lot of money. Someone asked her where it was from and she said, 'It's from Dave. It's an atonement present.'

"'What on earth is an atonement present,' I asked.

"'It's because he was rude to me in a previous life,' she said.

"It's sad that we didn't get on, because she was supremely talented, but it didn't stop us making some great records with the band. And I'm sure that they were one of the few bands I ever worked with who could have challenged and interested me for as lot longer than our professional relationship actually lasted."


And from Mike Stock's autobiography, The Hit Factory: The Stock Aitken Waterman Story:

"Of the three girls in Bananarama, Siobhan was the most difficult. After she split with the other two girls she went off to form Shakespeare's Sister in 1988, which I thought was a lot of appalling nonsense, and resembled a Gothic pantomime. Bananarama loved dressing up more than anything else. Siobhan had a tough exterior and she argued about the songs. I found it very difficult working with them, espeicially when we were forced into writing with them rather than for them. It was a recipe for disaster, because Siobhan wanted to move away from pop. As with a lot of artists, her 'mates down the pub' influenced her, helpfully offering advice on what they were doing wrong and insisting they should be doing something 'grittier.'"

Ok, I need to get my hands on Pete Waterman's autobio now. I love 'Strike it Rich'! Didn't really know that Siob was such a difficult gal (read: bitch) to work with. I do wish they'd bury the hatchet and get back together. That would be fantastic.