Close your eyes, clear your heart 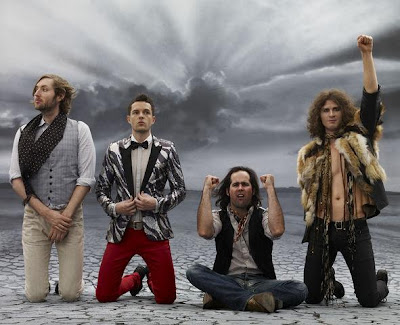 What an embarrassing picture. Brandon Petal is dewy though, yes.

Several people have asked me what I think of the new Killers song, Human (hear it now). Here I cave to the demands of my public:

:05 I love how Brandon's voice is mixed right up in the mix. He's such a little boy (and married too young, if you get my drift).

:29 Love the reverb on the word heart. Producer Stuart Price did that.

:35 The hook is sublime and should be on billboards: Are we human or are we dancer? The latter of course. I don't quite get how your sign can be vital and then your hands can be cold. Discordant images, just sayin'.

1:02 Good songs often burst open like one of those highspeed films of a flower blossoming. Human does that too.

1:16 The one flaw: some bowel-moving lyrics. Pay my respects to grace and virtue / Send my condolences to good / Give my regards to soul and romance / They always did the best they could. Urgh. There needs to a caustic element here to blunt that sugar.

1:39 Wave goodbye, wish me well. Our Kid is sooo sentimental, is he not? So emotional. And by emotional, I mean gay. Kidding. not really kidding

2:23 Led in by a heart still beating line, the synth bed that comes in just after the bridge is nothing but elegant. (Takes elegance to hear elegance, I'm sure you'll agree.)

2:51 Galloping forward, the song has Stuart Price's stamp all over it. Can you imagine how heroic the remix will be?

3:10 Brandon is still on his knees, looking for the answer. Crawl over here, LaFleur, I can give it to you.

3:20 The last 45 seconds are heavily instrumental, tinkly gorgeousness. Eat your heart out Chris Martin-Paltrow. What The Killers have done here is create a subtle pop gem. It doesn't beat you over the head with overt hooks, it doesn't stray too far or repeat too much of their past.

Human is a lovely song with heart at a time when we need one. That's what I think.

Note to Robbie: This song reeks of you. I think you will fall in love with it soon.
Posted by xolondon

Email ThisBlogThis!Share to TwitterShare to FacebookShare to Pinterest
Labels: Killers

I had a very comical thought this morning about the "are we human or are we dancer" line.

Taking it in the most literal sense, I recalled that Brandon mentioned in some interview or other—I think the Rolling Stone one I linked to on Friday or whenever–that the rest of the band took some convincing about the Stuart Price sound.

Plus Brandon said the lyrics to the songs came very late in the game, after the songs had already been recorded for the album.

I imagined them all arguing, like, Are we not a traditional guitar band?...i.e., organic and stereotypically "human"-sounding because of the drums and guitars... Or are we now doing dance music?

Just some fun food for thought that made me chuckle. I'm going to listen to the song again now. I may come around.

I'll have tea and scones for you. When you come around, that is.

P.S., not to rain on the parade, but there's also been some arguement as to whether he's actually saying "denser," and not "dancer."

I thought that line was too clever for him. I hope it's dancer, because denser is awkward and overwrought.

One of their best. Definitely up there with Mr. Brightside and Read My Mind. Makes me feel euphoric when the drums kick in. Brandon, you devil, you've done it again!

oh i love those emotional soppy lyrics :P And btw I am convinced he is saying Are we human or tony danza. Which if you think about it makes much more sense? AND! They have been working with Elton John on their Christmas song who did that other great song Hold Me Closer Tony Danza....

I was listening to it this afternoon as I was driving through Kansas, and I got a little choked up again. It's absolutely brilliant, whether or not the lyrics make any sense. Sometimes it's simply about the vibe or the feeling that it leaves you with.

...and speaking of the Feeling, Paul, lay off the Who's the Boss reruns!

I have come around to dLuv's interpretation. Upon NUMEROUS listens, I believe it's "denser" as well.

The new Rolling Stone (which has the short interview with them that Dluv quoted from) has the line as dancer, so I **hope** that is true. I really do hear dAncer, not dENser.

It seems everytime I listen to this song I hit play again which never happens with me. While it's only been about week or so it's a serious contender as my song of the year. Love your second by second review too.

From Amazon.com
Those familiar with the band’s oeuvre will recognize their signature in the synth-heavy “Human,” four minutes of sweeping, epic rock, on which Flowers sings: “My sign is vital/ My hands are cold/ And I’m on knees, looking for the answer/ Are we human, or are we dancer?” He says the lyrics were inspired by a disparaging comment made by Hunter S. Thompson about how America was raising a generation of dancers. But the song also had some help from album producer Stuart Price (aka Jacques LuCont), known for his work with Madonna and Missy Elliot, and who’d previously remixed “Mr. Brightside.” “He was the icing on the cake,” says Stoermer.

Sometimes we force our ears to hear something the way it makes sense to us. Instead, we ought to look for the sense in what we actually hear. You can force it to be “denser” all you want, but it isn’t.