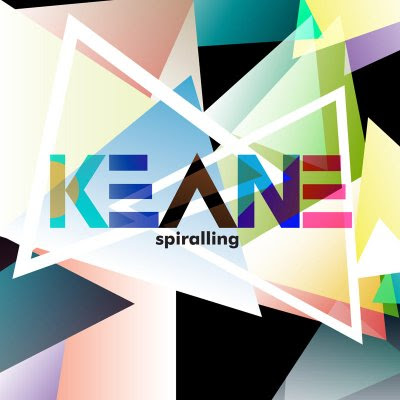 Keane releases a new song called Spiralling on Monday, August 4 at keanemusic.com. The album Perfect Symmetry, produced by Jon Brion and Stuart Price (!), is out October 18. To quote one of their b-sides, "I've waited a long long time."

Other songs include the first official single Lovers Are Losing, Perfect Symmetry, Black Burning Heart and Playing Along.

Their debut album Hopes And Fears was my favo(u)rite of 2004. It made me dizzy; I could not stop playing it for about a year. God lives in Your Eyes Open! Sadly, Under The Iron Sea was another story. I suppose it was written in the stars. Rather than up the ante, like Coldplay did with A Rush..., Keane overthought it and faltered. Though it has some good songs, it lacks the pureness of its predecessor, with Tom's voice too deep in the mix. Let us hope they really have found themselves again. We'll have a clue on Monday.

Your Eyes Open
One of my alltime favorite songs, ever. Reminds me of Ultravox's classic Reap The Wild Wind in its grandness and beauty. Tom Chaplin brought back the romantic male vocal.
We Might As Well Be Strangers
I was on a hotel bed in London when I first played this (on headphones). I love how the song explodes at minute 2.
This Is The Last Time
Anyone who says "this is the last time" never means it, do they? It's only when they don't bother to say it that they actually follow through.
Leaving So Soon
This song reminds me of someone important to me for years who I now utterly dislike. A slap in the face for you now, indeed.
Everybody's Changing
The kind of chorus that appeals to many in its universal whynotme-ness.
The Frog Prince
One of the few songs on album two that matched the mood of their debut. Another song unafraid to wear its heart on its sleeve. Lovely middle eight.
Crystal Ball
A cringe-inducing lyric, but the song still works because you can't really hear the worst bits clearly. Knowing what we know now, it seems like a message from Tim to Tom.
Somewhere Only We Know
The Song Most Likely To. Everyone's covered this, the nicest version being Laura Michele Kelly's orchestral arrangement.
Snowed Under
The band's first set of b-sides (for album 1) were as quality as the album tracks and this is one the finest. Hard to pick the best one for this list...
Under Pressure
Note-perfect cover of the Queen/Bowie classic. The best song on last year's Radio One compilation. As D'luv and I noted, the "loves such an old fashioned word" bridge will give you chills. I promise.
The Sun Ain't Gonna Shine Anymore
Another cover, this one of The Walker Brothers. Again, a good match for Tom's angelic voice, which is double-tracked on the perfect chorus.

Read my other Keane posts.
Posted by xolondon

Super news. I checked their website earlier today before the details were posted.

"Closer Now" is another great track from Keane (recorded before the debut album).

'We might as well be strangers' is my absolute fave. But with such positive omens, could this or the Killers' Price-produced popsicle be our elusive album of the year...?

adored the first album. still do. Everybody's Changing still makes me cry when I am sad. So so so so disappointed in the second album, perhaps because I felt let down but i have softened a little towards it recently. What with them and the seemingly decent return of travis perhaps fourth quarter is when the decent music will drop (where are the pipettes? They were the prettiest girls i ever did met!)

Keane is the best band ever, i can´t understand why Under the iron sea is so underrated, it´s just an amazing album. Try again is one of the most emotional songs ever written. I am so excited about this new album, can´t wait until October, it seems to be a long wait!! THANKS KEANE, they are the best!

Quit hating on Under The Iron Sea, witch! 'Twas one of my fave albums of '06!

And thanks for the news... I really liked their War Child single from last fall that was disqualified from the UK chart, too.

Dluv, Under The Iron was not as successful because you are a skanky slut.

But I agree nonetheless about The Night Sky single.

I'm a big Keane fan, so this is excellent news. My favorite Keane song is "A Bad Dream," although overall I thought Hopes and Fears was a stronger album.

Ok I'm pretty psyched that Jon Brion is producing this!

I am quite unclear who really produced it. If you read pop press it says Price and indie press, natch, says Brion. It sounds like they did some arrangement work / rehearsals / conceptual stuff with Brion and then finished it off with Price. All will be revealed - maybe Monday if we can detect the producer's hand on Spiralling. I would be shocked if Keane ends up sounding like Madonna OR Fiona Apple.

Looking forward to this.

Their most recent track, the charity song The Night Sky, is also rather fantastic.