Mixtape: Yes we can can 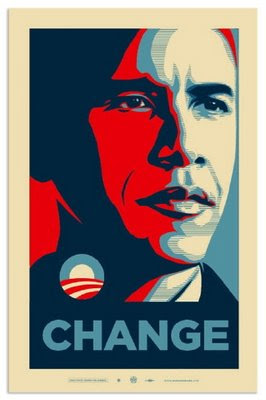 Now is as good a time as ever to post that image. Obama is wrapping up his presidential factfinding tour of the world. I post this because I think my friends outside the US care about this election almost as much as I do. Obama will be a citizen of the world, not a bully. I believe he can restore our image abroad and he made a strong attempt yesterday in Germany. For those really into it, The New Yorker's Ryan Lizza did a big piece this week on Obama's early political life in Chicago, which is about as corrupt as it appears to be in the Batman movies. Lizza also answered questions about the article here.

The opening chords of Ne-Yo's Closer are indentical to the opening chords of Darren Hayes' Fallen Angel, which was shockingly left off his Delicate CD. Somebody, like, say... Justin Shave needs to do a mashup now! Anyway, woofy PopMuse has a remix of Closer (Flashlight Exendedd) that's very stompy.

Which reminds me, while we all sit and mull over the downfall of Hard Mandy. Last week the NYT published a piece on how she's no longer a fashion icon, with her "Dolly Parton" dress (true!) at Cannes.

Boogaloo Stu reminds me of that era in the life of ABC when they were doing Be Near Me and looked all cartoony. He's also very John Sex. Stu's tune is Magnetic Heart and it's melodic electrostomp. What do you think?

With regard to the recent disco renaissance, in which New York/Dumbo indie types have "invented" disco music from scratch, ladies, that's a load of glittery caca. Had Santogold recorded Sophie Ellis Bextor's Catch You, the Stereogum kids would have creamed their retro Gloria Vanderbilt jeans. I do like some of the Hercules and Love Affair tracks (Time Will), but the Heloise And The Savoire Faire record is odious, like Scissters trying to improve Morningwood.

John-John Barrowman (aka Captain Jack) says "Come into my very gay closet" to look at his Barbies.

My favorite New Yorker Varant went to see Yaz(oo) at The Beacon last week and a did a brief review.

Gay Dad was one of the great bands of the late 90's (or maybe it was 20000 by that point). They did 2 albums: one perfect and one shit. Moody Places has their singles. I recommend Oh Jim and Joy in particular.

Has Gwen Stefani been pregnant for like 2 years now?

The Pretenders, who have a new album, Break Up The Concrete, in September, are giving away the songs week by week. Which would be great, if the first one, Boots Made Of Chinese Plastic, were any good. It's a worn out Bo Diddly pastiche.

Where is the Morrissey single? The album, Years Of Refusal, is out in September! The title of the album must refer to my sex life.

Not speaking of which, Jay Brannan and Margaret Cho have teamed up for a new song, which you should not watch while at work.

Goldfrapp's next tour is their usual halfhearted attempt to appease industry tastemakers on either coast, while completely avoiding most of America. Don't work too hard, dears/deers.

I am cranky today, no? Bitch bitch moan moan. Another summer weekend is here though - live it up trolls! I'll be seeing this...
Posted by xolondon

Oh Torr, do not lead the people down a path of pain. It sucked! ;)

Boogaloo Stu's been at it for years with his brilliant London club Shinky Shonky. I still treasure my button badge I got free there once which said "Bumsex for 10p"

Enjoy BHR!! I was hoping to entice you to Britain with my free tickets to Tom Baxter at the iTunes festival, but period drama gaiety is much better.

Ooh, Brideshead R. I expect a breakdown on how it works. Saw the movie reviews and am semi-concerned. But am still going to see it. As long as
they can make Charles less of a prick it should be a success. And I base that mainly on the mini-series,
though the book has problems too.