Mixtape: Make it to the promised land 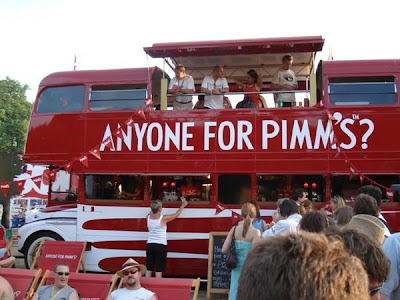 Do my Brits like a Pimm's punch in summer?

Mean old Morrissey made an appearance at O2 this past weekend - it was well received. He did a new track with a great title: Mama Lay Softly On The Riverbed. Only TWO months until Years Of Refusal.

Captain's album Distraction was due on August 4, but a message on their website suggests that is not happening. BooyouBritPopwhores to this news!

Alexis Strum news! Her band Bo Pepper is recording an album in LA with Greg Wells (Mika, etc). You can stream her latest song No One But Yourself here. The video is quite sweet as it stars a bunch of tabloid-y teddy bears.

Sugababes may have a new single soon. I wonder what this group can do next? They seem played out. I know some of you loved Change, but I thought that album had no legs. What direction can they go that will "wow" people? Timbaland is said to be working with them, but he's also working with everybody - including me on my first album, due in 2019. Regardless, I see no new girl groups nipping at their heels. 2008, halfway over, has been a terrible year for British pop, honestly.

Does anyone really believe Madonna is schtupping A-Rod? Maybe in 1994, but not now. Highly unlikely. Meanwhile, in other bad news for Lady Ritchie, her fallen-from-high brother is publishing a tell-all next week. Chart Rigger has the story (and a comment from me).

Mark Ronson produced a song called Beg for Leon Jean Marie. I've heard it and am not sure how strong the actual song is, despite being dressed up in big strings. It's also one of the Leon's lesser vocal performances. Decide for yourself here. I may change me mind!

So Boy George will definitely not be touring the US this year. He did a great interview with Perez Hilton (really!) and at the end played a bit of a new song called Yes We Can that sounded so good it gave me a wee chill. Kind of pride song, but with Barack's voice talking on it. I liked this line, which is fitting for George in recent years: "Please forgive me for crimes against myself / And I'll forgive your lack of faith."

I hear that Rodney Jerkins is working with Missspears. Is Rodney still considered good? That's a rhetorical question because I could care less whether he is or not. He did Janet no favors. It's not right but it's Darkchild, etc etc.

Keeping with the negative mood of this post, I heard a sampler from Sharleen Spiteri's new Melody CD and it sucks. Although Sharl did retro long before Amy Winehouse and (cough!) Duffy, this new album sounds dead on arrival. Only the ambient title track leapt out. Otherwise, the music is canned soul.

Sheryl Crow is doing a Christmas CD for Hallmark. Poor thing. That cannot be a good sign.

My parents are now hip again: They're going to see Neil Diamond at his arena show. Mind you, they are likely hoping for You Don't Bring Me Flowers and Love On The Rocks (I love that one too). One hopes he doesn't pummel the silver masses with his new album, resurrected Johnny-Cash-stylee as an indie God though he is.

It is true that I have never heard a song by Miley Cyrus or Jonas Brothers or is that Bros?). I just cannot be bothered, which may be an I'mgettingold thing.

Blogs: Electro Retro is back, thank Goddess, as is Shock-a-locka-boom, which I'd presumed that asshole Prince had killed. The IHOP blog seems to be dead. And by IHOP, I do not mean pancakes.

you hush now about the jewish elvis... you hush!

we Brits love ourselves a Pimms.

but on those summer days when it's not lashing horizontal rain from dawn to dusk, like today.

*sinks into a depression*

Hi there, I'm a dedicated reader of your blog and find your musical taste and comments absolutely brilliant. However, It was really sad to read your thoughts on the new Sharleen Spiteri album. Yes I'm a huge Texas fan but honestly, I've heared the entire 11 tracks and the album is just one of those that realy grows on you and after a few listens you'll find it very special. Just check out the song "Day Tripping" - Absolutely STUNNING!! Please don't give up on her, give it a chance. Hope you'll like it :-)

I'm with you, XO...the tracks I've heard from Sharleen Spiteri's promo are my biggest disappointment of the year. How could she put out such a contrived, dull set? I am perhaps the only fan Texas has here in America, and I try to make up for the entire country with my fanaticism. But these songs just leave me cold.

Yes, I love Texas, so I'll try to give this album a chance. I do like Melody and Stop - we'll see if there are any other gems. I think Bernard Butler is spreading himself thin.

Butler even did Cajun Dance Party and the upcoming Black Kids! He's like the Timbaland of UK inspired pop!

The Boy George interview was entertaining. The guy can be very engaging when he wants to be. It may all be a PR exercise to keep him out of trouble in the UK, but he needs to do things like this if he really wants to be remembered for being more than tabloid trash. Surely he has one of the best blue-eyed soul voices from England in the past 25 years.

I also do not get Lady Gaga, nor have I heard a Jonas/Miley song, by choice. What these kids are missing that the last group of kids had was a way of appealing to many age groups, not just their own. Even Hanson did a better job. What do they care as long as they get paid?

Sheryl Crow at Hallmark? More like a nail in the coffin. It'll probably sell boatloads more than her new album unfortunately.

oh i bloody love Pimms in the summer. i practically have it on my cornflakes. But yes, like Tricky says, not when it's pissing down with rain outside and my shoes are soaked by the time i get to work. Then i just reach for the gin (gun/gin - see what i did there Chicago Musical fans!)

Oh British pop can just fuck right off this year. Paul Heaton's album is ok, but delayed Captain? No new Upper Room-y type band? Tom Baxter is lovely of course but that is so last year now (well in release date not in magnificence!) oh and i'm with you on the bands i don't get list and could add several more...

Girl groups - everyone thinks the next one to do whatever will be the next big thing. I do like the saturdays and red blooded women, but the british charts is a strange and confusing place right now. 88% of it this week was factually rubbish. Tosh. Piffle.

What happened to fourth singles from albums? Girls Aloud and Sugababes abandoned ridiculously early. Are they taking the westlife tactic? Massive promotion in the last two months of the year to maximise sales then rest on their laurels the rest of the year??

Also, am loving of the gin and the beer. And all the alcohol I have in the house is vodka with nothing to mix with. And it's raining. (woo). So tea will suffice.

Am I weird because I have never had Pimms?

Shockalockaboom is one of my favourite music blogs and I too thought theat the artist who writes songs about hating fansites had illed it. Yay!