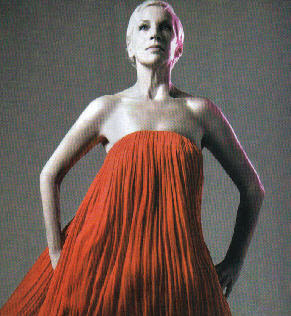 It looks like Annie Lennox will release a Best Of compilation in the fall. Her blog says this: "Annie is returning to the studio to work on her first new material since the critically acclaimed fourth solo album Songs Of Mass Destruction in 2007. This new material will be released later in the year through RCA / SonyBMG."

Meanwhile, there is a rumor that Annie sings in the new James Bond movie, though I am not sure she's doing the theme song. That would be brilliant.

In 1987, Eurythmics released a longform video of their album Savage. Amazing stuff shot by Sophie Muller. Brand New Day, below, was the finale. I always loved this video and had not seen it since the 90's. Watching this now reminds me that Annie Lennox has always exuded an aura of self-respect. She's never had public breakdowns or been the subject of distracting gossip. After almost 30 years in the business, that is to her credit. She appears in this video at 1:50, literally glowing.

I so wish that Savage longform video would see the light of day on DVD, but I just highly doubt it ever will. It was so ahead of its time, as was the album if you think about it.

No matter what less-than-progressive music choices Annie has made in the past 15 years of her career, she has always remained a complete class act, and was one of the biggest influences that drew me into modern pop music 25 years ago. Through strange relationships and rocky divorces, she has managed to keep her private life private, and deserves respect for that.

However, I admit that I also worry about her future prospects, as she seems to the type of artist who almost needs the stability and nagging of a record company, as when left to her own devices, she may either fall into the mode of retirement or drift away in a haze of relative obscurity. Greatest Hits projects usually signal the end of an era, but I guess it is still to early to tell.

I weirdly remember standing in a nameless discount store about two years ago and hearing a song by her I had never heard before or since, and it does not exist anywhere in her released catalogue, including Eurythmics. Supposedly there were a couple new songs slated for a greatest hits at that time, so I am wondering if it will show up now. It sounded very "Diva"-era.

The ball and chain's response while I was playing this on your blog: "I always loved that Eurythmics song!"

I'd never seen that clip before.

I caught the James Bond rumor, and wrote about it earlier in this week's Towleroad column. Seems like the typical Bond scenario, though, where a dozen or so artists are asked to submit a song and only the one gets picked.

Did you hear the Saint Etienne one that never got used for "The World Is Not Enough"? It was on Boxette.

Annie's incredible music and her commitment to humanitarian efforts are inspirational and she serves as the perfect example of what an artist should be. A phenomenal woman using her talents to improve the state of the world.

Wow, Annie knows how to make a great entrance! She's glowing indeed. I've never seen this before, and youtube is a godsend. Annie and Dave were so ahead of their time. Savage is one of my fave albums of all time. Great stuff.