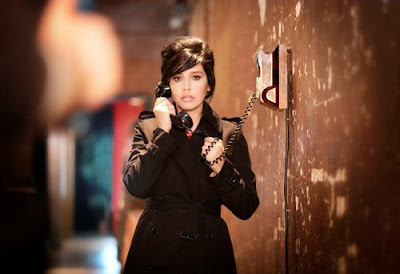 Ooh ahh, look at Sharl. She's just released her new video, All The Times I Cried (below), and it's not bad. It was done by Olivier Dahan, who directed La Vie En Rose, the movie about Edith Piaf. Had I directed this video, Sharleen would have also played each of the other two women auditioning. That was a lost opportunity. And don't you think she's looking more and more like Kate Bush as she ages?

As for the song itself: weak. This retro sound is ubiquitous right now and she needs better material. Let it be known that Sharleen did it first in Texas with songs like Black Eyed Boy, but I don't imagine this becoming a hit. She has another track called Stop, I Don't Love You that would have made a better single (and potential remixes). The album, Melody, is out July 14 in the UK.

OK, the dress is a bit much, but she looks beautiful, although why she needed all the faux backlighting is beyond me--it kinda takes the video out of its mood. The song isn't a total knockout either, but it is quite nice, and one would think with all the retro stuff around now it would do better than another Texas album.

Still, was Texas doing so poorly that a solo turn was necessary? Red Book was at least 2/3 a great album--possibly their best since White on Blonde or at least the Hush.

I like it but when I hear it I just hear 'Rehab'. Which I also like. Maybe it's the horns and general retoeyness.

In other news, that Sara Bareilles album was finally released today in England!