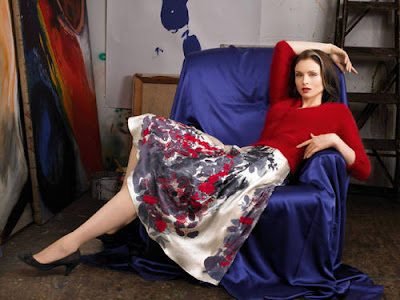 Sophie Ellis Bextor is currently recording her new album. 2007's was a corker, so her work is cut out for her. La Bex's myspace player has two new songs: Off And On - the infamous Roisin Murphy castoff produced by Calvin Harris. Both have leaked all over the web, no suprise. Sophie's version is much the same, but her vocals are more sing-songy and light. She's also added a cool, choopy bit at the end ("I put myself, put, put, myself back together").

The other track, which PopJustice reports is produced by Richard Stannard and The Freemasons, has an epic title, Heartbreak Make Me A Dancer, which she, of course, pronunces dahncer. I'm disappointed by this one; it shimmies on a disco vibe, but never really lifts off. In fact, it's more like a Sophie knockoff. Perhaps it needs a better middle eight or some more heat in the arrangment. When it doubt, add more sparkles.
Posted by xolondon

See, 2008 is already looking up for Miz Bex! There is nothing dripping from her face, and she does NOT look like an alien here! Looks like somebody's learning how to make a pretty pictures.

Love the Heartbreak song too, btw.

Her 'Off & On' *is* much of the same, but that choppy bit you mention at the end may tip me over into liking her version just a smidge more than Roisin's. It's early times yet though.

I can't really choose between Sophie or Roisin as to whose version of O&O is better, but I actually like Heartbreak a lot. Seems like she's going in the right direction.

I add my vote to liking Heartbreak. I think it is so lovely, though a tad familiar. More sparkles are always good though...

I need that now! One of my favourite Roisin tracks...

Hmmm... it's the same but different. How odd!

I think I am tough on SEB. I expect masterpieces, nothing less.

I am tough on SEB too XO. But i think both her new songs are brilliant. Sophie's version of "Off & On" is waaaay better than Roisin's. Its more fresh and Sophie's vocals on it are brilliant.

How great would a Sophie and Róisín duet be?

Róisín's Version of the song is more compelling whereas Sophie's sounds more uninvolved somehow.
1:0 for Róisín

Michael from Berlin... I agree, but surely Sophie's 'big thing' is that her vocal is more often than not aloof and univolved so when the passion breaks through she *shimmers*.