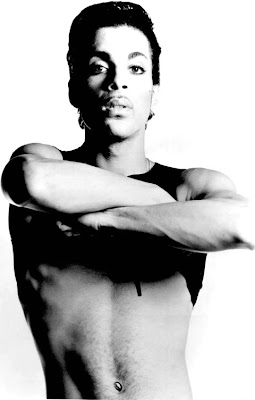 Today is the little Purple Man's 50th Birthday! Eye'd buy him "a little box with a mirror and a tongue inside" if he hadn't turned into a tiny purple prick, suing everyone, not capitalizing on remastering his back catalog and annually releasing an album not worthy of his legacy. Oh well.

Eye always loved how Mr. Blackwell described Prince: "A toothpick wrapped in a purple doilie." Wicked. Below are my lists. It's hard 2 hate him when eye think of the great, emotional music he has given 2 the world.

XO's Top 10 Plus One Prince Singles:

Sign O' The Times
My favorite Prince song and his artistic peak.
When Doves Cry
The first time eye was truly challenged by a song. Radio was CHANGED.
Mountains
Pure pop. Like air conditioning on a summer day...in Nice.
Purple Rain
What needs 2 b said?
Little Red Corvette
Album version always superior 4 its ending minutes.
I Would Die 4 U
Can u do the hand motions? I can.
Gett Off
Krissy, u have my love 4 giving me the great memory of this 1.
If I Was Your Girlfriend
The song that launched a thousand handjobs.
Kiss
Women not girls rule my world.
Alphabet Street
Extended version is best.
Why You Wanna Treat Me So Bad
This has aged very well! Find this if u don't know it.

The Question Of U
Grind! The finest use ever of handclaps and "hahs"!
Alexa de Paris
Gorgeous 5-minute orchestral used in Under The Cherry Moon.
Something In The Water (Does Not Compute)
Ballad from 1999, a lost classic. Vocal ecstasy.
Sometimes It Snows In April
At his heighth, an unexpected, 7-minute piano-based folk ballad.
The Holy River
Eye once saw Shawn Colvin do an impeccable cover of this
Joy In Repetition
"My name is Andre Crabtree the Third"
The Cross
Spine tingling, always.
Anna Stesia
Love is God, God is Love, girls and boys love God above.
17 Days
B-side to Doves. Bitter and elegant.
She's Always In My Hair
The best of his psychedlic era. A b-side superior 2 its a-side.
Power Fantastic
One of the prettiest, most passionate songs ever recorded. MY GOD.

Trivia: Do you kids remember that one of the songs above has a much more complicated title? What is it?

apparently i know less about prince than I thought I did as I don't know the answer to the trivia question. Though am sensing I'd likely recognize it.

My go-to Prince moment is that my friend Lisa and I were studying late and turned on the tv to wind-down and got sucked into Purple Rain on Usa at 4 a.m. Also, I think they played Purple Rain at one of the dances I went to as a slow song.

And there are lot of good ones you've mentioned and I've forgotten about. Though Batdance is the Prince song my I-tunes is pulling up. Ay.

17 Days (the rain will come down, then U will have 2 choose. If U believe, look 2 the dawn and U shall never lose). Do I win a prize? And if not, will you marry me XO? I feel that we are music twins a la Joey's hand twin in Friends.

Yes, beautiful one, ur lavender diamond ring will arrive in the mail shortly.... but first u must purify urself in the waters of Lake Minnetonka.

Babs: Purple Rain is actually a solid movie. It's been ages since I've seen it. Under The Cherry Moon, not so much, but it looks good.

good call on 17 Days full title... Also, I need to point out that Paisley Park was actualy a single. The 12" version is stupendous!

Great list! It is a shame he has become even more problematic when it comes to "ownership". Maybe he'll wake up one day and realize people don't like the music he's making as much as what he used to do. Where's the inspiration? Part of his charm was his ability to fly in the face of the expected and create some truly amazing records. The only thing I've heard recently that interested me was Black Sweat from 3121. And that's over the course of three "comeback" albums.

Still, you have some incredible choices on those lists. I would love to add Raspberry Beret, 7, and the highly overlooked Gold from the Gold Experience. Contract disputes can be a bitch.

I've been waiting for the remastering, but I doubt it's going to happen. I remember reading that he wanted to rerecord every album he's ever done.

His new stuff has just been so bland, except for Black Sweat, as countpopula pointed out.

Move "Mountains"(pun intended) up to #1 for me (Wendy and lisa co-wrote it. Love them!).

I would have to remove "If I Was Your Girlfriend" (too creepy).

One of my fondest memories of XO is when we worked together and somehow we both figured out that the other liked Prince and his offshoot bands. I agree with most of your top songs. My top songs, in no particular order, are:

David - good call re Paisley Park. I'll have to figure out which song takes its place!

Jason, I love that you have that great list and then there's odd Dinner With Delores in the middle of it. :)

I think Gett Off is one of my favourite Prince songs ever, there are probably ones with far more beauty and brilliance, but that one i return to over and over again. Ditto Thunder. Just love that track. And strangely and maybe ashamedly i adore Arms of Orion despite it's saccharine sweetness. Or maybe because of it? The Madonna duet on like a prayer though? Ugh.

PS i do really really love mixtape. Check your inbox!

Yeah I know "Delores" is one of his lesser songs... but I've always admired it's simplicity. Just a nice little tune.

Oh how I would love it if he and Warners could kiss and make up so that deluxe editions of his good records could be released. I don't see it happening, sadly. :(

7 is one of my more fav. songs. And I agree with you on the ennh Madonna duet on Like a Prayer. I have a taped version of that album and the only one I left out was that one.

We've had this discussion before, but the Girl 6 soundtrack is a great Prince album, even though it consists of throwaway tracks and stuff from Sign. But it's fantastic.

The only song that has done ANYTHING for me recently was "Chelsea Rodgers." But apart from that, nada.

I too wish that he would kiss and make up with Warners. They're not the same owners as they were back then. So many missed opportunities. I was really hoping for the 25th Anniversary of "Purple Rain" to have the actual soundtrack released. I don't think that the Dez Deckerson and the Millionaires' song ever did get an official release.

Other favorites that he did with others:

Also speaking of When You Were Mine. Someone has youtube'd Cyndi Laupers show stopping performance of it at the 1985 American Music Awards. A must see if you haven't already!!

Top 10 singles:
Little Red Corvette
Raspberry Beret
Betcha By Golly Wow
7
The Arms of Orion
I Could Never Take the Place of Your Man
Money Don't Matter 2 Night
I Wanna Be Your Lover
I Would Die 4 U
Sign O' The Times