Mixtape: My voice, my weapon of choice 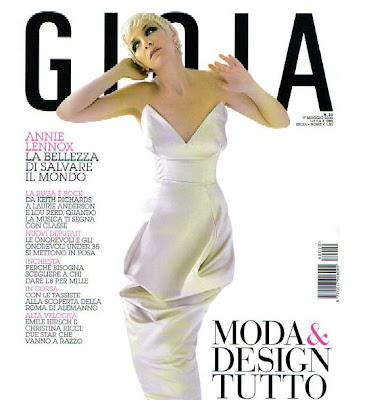 Followng up my Grace Jones post, there is now live video on youtube, including a sneak at her simple-yet-scary Corporate Cannibal video and a live bit of Pull Up To The Bumper. The Guardian also reviewed the show, as did the vair vair lovely Phil De Worrapalova.
Antigone releases her feminista disco single More Man Than Man on July 14. It'll be digital via yoctopus.

Saint Etienne literally releasing another compilation? The kids on PJ forums say so. My Gawd. I assume they have zero control over their own catalog. At least it will have 2 new songs, plus Lover Plays The Bass.
Billie Piper is unrecognizable in Diary Of A Call Girl. It's not a bad show though. Swank London locations and BP is pretty engaging in it. Who knew?! Who also knew she was carrying Laurence Fox's bun in her oven?
Sam Sparro asks Annie some questions for her EPK.

La Bex fan Kaushik is going Guevera on us and wants you to sign a petition so Sophie will release her collaboration with Pet Shop Boys, assuming it really exists.

Speaking of Bex, did you notice my close personal friend Dan Gillespie Sells in a criminal coat/shorts combo with baby blue docksiders in the Telegraph?
I love the name of Mercury Rev's new CD: Snowflake Midnight (out September 29th). Also am bemused by them describing it as "self-luminous." Their old song Nite And Fog is freaking magical.
Oasis has a less ethereal title for their probably-weak October CD: Dig Out Your Soul. Eww. The single has a better title: Shock Of The Lightening. I feel like they're a variation on Prince: Everybody get excited for a week and then we go limp.
The chick in Mates Of State looks like a blond Catherine Tate. Which reminds me, I LOVED the Dr. Who episode about Agatha Christie.

Chanteuse Sarah Nixey's single is now on iTunes all over the place. It's ambient French pop; a Francois Hardy cover. I think it's a divertissement un peu (is that right?). C'est bon, mais ce n'est pas Strangelove. Viva Mlle. Nixey.
Boy George's US tour is over before it begins. I wish him well, but what a mess that man's life is.

I was a HUGE fan of Til Tuesday, but have never fulling warmed to Aimee Mann as a solo artist. Her new record seems to have been recorded with my taste in mind! 31 Today is a total gem. She appeared in the Independent this week.

Blogs:
Danneeboy cracks me up. I love how he describes good music as "the sex."
Jemboys World (Eternally 14) is loaded with great rarities from the 90's. Load.Ed.

Re: Saint Etienne, believe it or not, I believe they have full control over all their compilations. In that interview I did with Sarah Cracknell (the same one I posted bits in the video clip in back in December -- plug, shame, plug, darling!), she said that they love putting out hits sets for different territories, because they love the process of assembling all the tracks and photos and the full package.

But I agree... do we really need another one?

Oh yes, Saint Etienne love their compilations! One between each new album please! :-) They;ve done so many great songs that have not had a UK release so that needs sorting out!

Aimee Mann's 31 Today is indeed a splendid thing. Try her soundtrack to the film Magnolia or better yet get the film and she'll blow you away.

Wow it seems the grace jones gig was THE place to be on Thursday last week. Phil is rather lovely is he not???

Sex Sells looked much better in his faux fop pirate/dandy outfit in the telegraph. I am still hurting over what he said about M&S suits as i have just bought two. Still he probably made some good cash out of it.

2) There was a Dr. Who about Agatha Christie? Too cool. Yes, am way predictable there.

3) Is Laurence Fox the guy who was the lord of the house in Remains of the Day?

4) I also preferred 'Til Tuesday to Aimee Mann's solo stuff and what the others recommend about Magnolia is pretty much what I've heard about from the Magnolia soundtrack.

5) haven't actually checked out St. Etienne. Kinda meant to but it didn't happen.

The first two Til Tuesday albums are not even close IMO in quality to Aimee's solo music from a writing standpoint. Funnily, her first solo album kinda passed me the first time around, but now I think it may be her best! The whole middle of that album is SO DAMN GOOD! Put Me on Top, Stupid Thing, Jacob Marley's Chain and Mr. Harris (is this song about a old perv and his young fetish?). Such an injustice the label went bankrupt when it came out and promotion ceased (not like they were destined to top the charts).

I LOVE the Magnolia songs actually - my problem is the arrangements and singing on the later work.

There's a song on the first solo disc that I love - the one where she sings about going to play songs with some guy from NY. May have the word good in it.