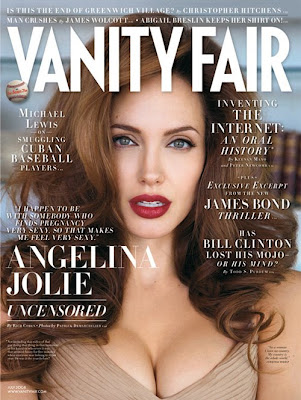 I am transfixed by the new Angelina Jolie cover of Vanity Fair (click to enlarge). I shall match the links on this post to her lips! Who was it that said liptstick lies don't hide the truth, they won't keep you waterproof.

For some reason, I get excited when Morrissey announces an album title just as I did in 1989. His new CD is produced by Jerry Finn (a good thing, as Finn did the perfect You Are The Quarry) and it's called Years Of Refusal. 12 new songs and Goddessonlyknows how many b-sides. Cannot wait. Interestingly, he has also just broken with the manager who engineered his comeback, Merck Mercuriadis.

El Marvy has been namedropping in Manhattan. Read about his special live show with Donna Summer.

Captain's new jaunty single is called Echoes Of Fashion and can be heard now on myspace. Cannot wait for this new album, Captain, o captain! Don't you want to be Clare? She has the best job, just like Wendy did in Prefab Sprout.

PAUL: If you love this mixtape, if you reallllly love it, you will send me the Daggers songs.

Would you like to compare Roisin and Sophie's vesions of Off And On? Do it now at Le Jukeblog de Benzen.

Labelle is reuniting and working on a CD with Lenny Kravitz and Gamble & Huff. If God is a black woman with an afro, She will see to it that Roisin Murphy writes a song for this album. It would be stellar!

In a revelation that does not surprise me, Darren Hayes and I agree on the top 3 songs from Cyndi Lauper's album, which I need to review.

Tori Amos is on her own.

For those of you who remember Milla's perfect pop single. Gentleman Who Fell, you can find that album at The Island Of Failed Pop Stars.

Lorraine were recently in London mixing with Dave Bascombe, so maybe the damned thing will finally be released.

PopMuse did a post on the Alanis album - and he posted what is one of her best songs, It's A Bitch To Grow Up, a new bonus track.
Aimee Mann's new song Thirty One Today is the best thing she's done sicne Wise Up and Save Me. It serves as a companion piece to the above mentioned Alanis song. "I thought my life would be bigger by now / But it's not and I don't know where to turn."

The Ne-Yo song just hit me. It's elegant. Like me and Angie...
Posted by xolondon

Gotta toss that Aimee Mann album on my iPod and listen to it! I love "Freeway."

You know you just want Obama to call you "sweetie."

Ok, I'm gayer than a box of birds, but I would totally shag Angelina. Wow. She is massively hot.

And those are my favorite Cyndi songs too... I can't get enough of Rain on Me.

The Ne-Yo song hit me while watching his commercial for "Overstock.com". Really.

Thanks for the shout.

YES! That is how I fell for the Ne-Yo too. It happened like yesterday. He's going to get a big bump from that.

I still get excited about new Morrissey album titles too. I think Years of Refusal sounds brilliant.

Speaking of Lorraine, have you heard "When I Return to the World"?

Lorraine - When I Return to the World

Can I be honest? I don't love that song! I think they have better potential singles. When I Return To The World was actually the bside of their Oct cover of Heaven (P Furs). But it is nonetheless a nice slice of electro/jangle pop.

I also like the Ne-yo song, but I think Rihanna's Please Don't Stop the Music has been slightly plaigarised in terms of production. The chorus chord sequence is the same as well (although very simple of course). I found Please Don't Stop the Music totally refereshing and it was a big hit, so I'm not surprised to hear something so similar by a similar artist. Anyone else pick up on this?

I think both tracks were produced by Stargate, so there may be shared writing credits as well.

I had not noticed it, but will listen closer (pun intended)!

I can't decide which one I like more. I want to say Roisin because I -loved- Overpowered and her voice .. but they really do sound very similar!

Great tune. Will this be a hit for Sophie? Could this have been a hit for Roisin? What does it all mean???

How odd that my most recent CD compilation contained both that Alanis song (It's A Bitch To Grow Up) and the Aimee one (Thirty One Today). Am I psychically linked to your blog?