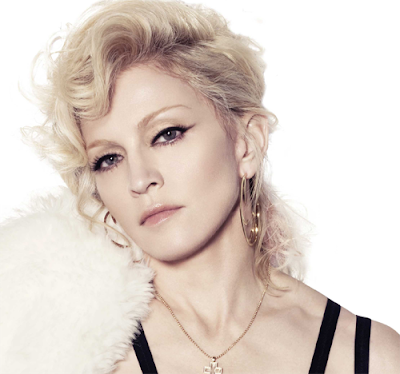 Before There Was Candy…

Click on that link! This blogger says that Madonna originally had a boxing theme for her album and has photographic evidence of the cover (albeit with copyright notices all over it). If he's right - and how will we know? - she made a big mistake. The images he has appear to be real and are far more sophisticated than the photoshopped garbage that finally emerged.

What happened? Too many cooks in the kitchen? Maybe someone told her the M-dolla theme was too racially charged? Did she think the candy imagery would appeal to the High School Musical set? Don't know, but I'd love to...
Posted by xolondon

This makes so much more sense. The images have a logic and the backgrounds are really beautifully done. I am still not wild about her putting her crotch out there, or the hair styling, but at least it has some integrity as an artistic concept.

Next to this, the toy-town blue Helvetica rounded and sweetshop background look so naff. Boxing + candy just makes no sense.

Is this as big an artistic fudge as the American Life video debacle, I wonder?

I still can't believe how hideously awful the photo shoot for the album was. It's like someone needs to find the negatives and bury them deep in the earth so that they can never be found again.

That having been said, I like that 4th picture.

About the boxing theme...didn't M-dolla sign up to be the lead in Boxing Helena and then back out? Could this be her revenge or our punishment? Hmmm...

Yeah, those photos you linked to make more sense and are better than the beauties we got. I also like pic #4 and even #3 too. I didn't realize the boots laced on the heel too--interesting. That pose (#3) makes me think Madge will turn around and say "Prophecy!"!

See, I have it all worked out. I hate bad art direction.

Maybe these pics will be used for the tour programme or something.

Too bad the tour is called "Sticky & Sweet." Looks like the Candy theme is here to stay.

Though I wouldn't be surprised if there was a "Boxing" set at some point in the show.

The album itself is craptacular, so why shouldn't the cover art be the same?

Oh I would KILL for a copy of that 4th picture without all that shit on it. Incredible; And as much as I love the cooch action of the actual album cover, as others have said picture 4 should have been the cover.

Madonna would have made a great appearance on a WWE Wrestlemania Pay Per View to promote the album, considering the psuedo-pro wrestling look she was going for,or at least a bout with the WWE "Divas;" too bad that did not happen.

Have you heard about that crazy idea of mexicans? They're trying to add 2 more shows to the Sticky & Sweet
the Madonna's tour for this year, people in México is asking for a third and fourth
show because the first and second got sold out in less than 40 minutes which gives to Madonna a new record.
It sounds a little bit crazy, but they're asking for it all over the web trying to give this message to Madonna
México asks 4 more.