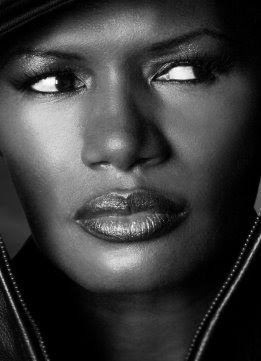 My look is for girls on the run. I'm always in a hurry. For me, sunglasses are eye make-up, even at night. Half of my face is sunglasses, the other half is lips.

It's probably no secret that I think that Slave To The Rhythm by Miss Grace Jones is one of the Greatest Songs Of All Time. And now Londoninium is abuzz because Grace just did a big show at Festival Hall (read a review). Topped with tall hats and working the legs (and the usual amount of crazy), she debuted new material from her forthcoming Corporate Cannibal album [6/30 update: it's now called Hurricane]. It's her first in 21 years since her last record, Bulletproof Heart (Grace always has the best album covers), so everyone is on tenterhooks wondering how the new one will sound.

What we know about the new album: It was produced by someone named Ivor Guest and has a big supporting cast. Songs include Devil In My Life, Hurricane, Love You To Life, and Corporate Cannibal. I've heard one song - and you can too - This Is Life, and it's very martial. Grace's voice can sit in almost any arrangement and the new track is both modern and self-referencing.

If you don't have Slave To The Rhythm (1985), Trevor Horn remixed one song, "pulling it into a million pieces and throwing them back together in a myriad of new formations" to create an album built around that one song. Really fucking cool. Check out her wicked, "cloaked" performance of it on Terry Wogan. Watch for the payoff in the last 30 seconds. The song is famous for Ian McShane's "Ladies and gentleman..." intro. Trivia #1: McShane met Trevor Horn at my favorite London restaurant, Geale's in Notting Hill.

Trivia #2: I have a framed album cover of Nightclubbing in my bedroom! You can see it, if you're ever lucky enough to get in there.... haha.
Posted by xolondon

My knowledge of Grace Jones is, admittedly, limited but in addition to "Slave To The Rhythm" the other Grace Jones song that I like is "I'm Not Perfect (But I'm Perfect For You)" The video seems to be etched in my memory.

Didn't Grace Jones F you on top of a burning trash can in the '80s? That was you, right?

Yes, she did! And then she dug her stiletto into my bare back. The mark seems to be foever etched in my ass.

Love Grace Jones. My favorite album for all time "Cover Story" I can listen to over and over. "I'm Not Perfect" is a great song and video with Andy Warhol I think saying something like "Grace Jones is Perfect" and Keith Heiring was in that video too, with his artwork clearly in display. "Nightclubbing" a great classic with songs like "I've Seen That Face Before." There was that live video that she did and I don't know if it's out on DVD, she opened the show with her version of "Warm Leatherette" where she played the cymbals.. So cool. She also did quite a few cover songs ranging from Edith Piaf's "La Vie en Rose" to Joy Division's "She's Lost Control." Very versatile woman, that Grace.

Isn't she quite the Diva? I saw something on YouTube once where she was on some show and beat the shit out of the host for not giving her enough attention and time.

Slave to the Rhythm remains a favorite of mine 20 years later--both the album and the song. What a wacky album that was! No major label would be caught dead today releasing an art project consisting of 8 interpolations of the same song! But what a song...

I am so excited for the return of Grace. I remember being immediately struck by her image on late nite video show Nite Flights many many years ago. Her voice has a much broader range for me than someone like Mariah. It's not all about the notes, but HOW you sing them. Still, she may be scary to some, as she is quite uncompromising.

The new song sounds darn good! Better than the mostly limp fare from Bulletproof Heart (except for Love on Top of Love and Amado Mio). Has it really been 20 years? Can't believe she's 60!

The Festival Hall gig was gobsmacking. And, V, she used the cymbals on Warm Leatherette. I thought she was going to eat the whole auditorium when she baked at us to shout "warm" to her "leatherette".

Reading through this and the fan reviews on the PJ boards have been incredibly satisfying. She is just so... mesmerizing, among other brilliant things.

My friend Clare said there's talk of Grace doing one show at some point here in Oz this year. Wherever I need to fly in this country of mine, I'll go.

I've never really been familiar with Grace Jones's music... but as a pre-teen, I enjoyed her cinematic adventures in the 80s: Conan the Destroyer, and A View to a Kill.

I doubt, however, that these flicks have stood the test of time!!

Just read this on the BBC site about her recent performance. It's so perfectly Grace. Anyone know if she's touring the US?

Only one girl grabbed her round the waist from behind. Grace Jones pulled herself free and simply said, "I could put you down." No one argued.

I had drinks with Grace Jones at the Mondrian Hotel Bar.

Well, that's a lie, I was having drinks with a friend and so was Grace at the same empty bar.

It was like 4pm on a Wednesday, a wierd time for Drinks. And she was DRINKING! And very Loud and very GRAND! The LA idiot waiters and bartenders were totally annoyed by her.

I was in shock, desperately trying to think of something cool enough to say to get into her conversation, until finally I just gave up and watched her drink with some random white aging music industry looking dude, it was theater on the highest order.

Check out you tube. There is a great video of Corporate Cannibal from Massive Attack's Meltdown festival in the UK. It is amazing! She RULES!