Kylie: Wasn't it just her choice to make... 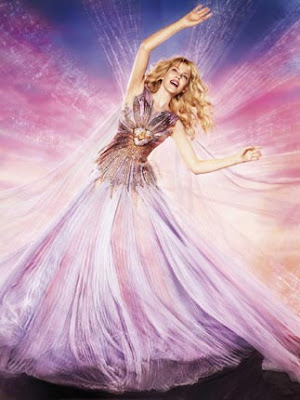 Peter Robinson of PopJustice / NME has just written a piece for the new Attitude that examines the problems with Kylie Minogue's X project. I haven't been able toget my sweaty hands on it yet, but I've heard he takes Kylie's collaborator Will Baker to task, as well as the record label and large number of people trying to control Kylie's post-cancer return to pop. Here is what I wrote on the PJ Forums:

I like X as a collection of songs - though it has no coherence as an album. It's like a hits package. I have not read Peter's piece, but here's the one thing about Baker - he spent much of White Diamond trying to convince Kylie to show more of her true self as he knows her. And she didn't. That's my theory as to why he included the cringey Will-cries-and-is-comforted-by-Kylie scene. Trying to show her as a friend. At a certain point the smiley pop becomes tiresome and he knows that. We already get the sense that Kylie is actually a nice person, but I sometimes wonder if he's trying to make her into something she really is not. She's been in the public eye for so long that the shield is permanently up.

I am not sure of Will or EMI's control over X, but it seemed a good moment for her to make a more personal statement. It sounds like Will viewed it as a chance for her to widen her styles. She is never going to be a hit in America and that's fine. She should not worry about it! I do think the X album cover is EPIC, but in general, as a stylist Will has become wretched... run out of tricks. Let the woman be PRETTY for Godssakes! His tour costuming is infantile - I assume the designers followed some sort of direction. Remember her in the beautiful dress on the moon in the Showgirl tour? Wow indeed.

I should note that I think Janet Jackson and Madonna have also suffered from identity crises this year, with too many cooks in the kitchen and too many bases to cover. Becoming sort of shallow at the moment when one hopes the wisdom of a life well lived would inform their music. After so many records sold, Kylie should exercise the creative control she has earned.

But again, an album that contains Wow, Stars, The One, Cosmic and All I See is pretty fucking great in my book. In fact, the extended versions of All I See and The One rank as some of her most sublime moments.

Update: I've finally read the article. It uses The One as a solid example of the cock-ups with X: Perhaps the most obvious hit single, released at the end of the campaign with no video (and apparently not performed on tour!). Robinson's final parapgraph is the kicker. His advice:

Think about how you want to be remembered in 200 years. Distill that vision into ten songs. Be selfish. Do not be distracted by what you think your fans want... you can do anything, but you will only truly succeed when people know you're calling your own shots. Just be yourself rather than what other people want you to be.

Background reading: Read my thoughts on X / Paul also commented on this topic
Posted by xolondon

Haha, it seems we're all quite embroiled in the "What Went Wrong" debate. It gets quite personal, doesn't it? I agree that Baker was a poor influence in many ways and that, as much as it pains me to say it, she's just been TOO camp.

I too like X (the album), but I agree it is a bit scattered, not like there is death metal or gangsta rap tracks (although Nu-di-ty comes close). It's weird how there are supposedly all these Kylie fans that seem to have deserted her because she isn't doing what they want her to, kinda like people dictating what music should get piped into public places. Not everything is to everybody's taste, and some experimentation is always healthy.

It's obvious she didn't want to dwell on the bad times, and X accomplishes just that. Not her best album, but far from bad.
She's just too self-conscious and mannered in delivery, when she needs to sing fun songs that have substance and melody. In My Arms and Wow came really close, although the early leak of the former didn't really help the delayed release. I've seen it suggested for Steve Anderson as a producer again, which is an excellent idea. Or why not William Orbit? What's he up to anyway? Maybe he could do for Kylie what he did for Madonna. That being said, Greg Kurstin did some fine work on all his songs...even the B-sides.

X is still a better album than Body Language.

I agree with everything you said there! In some respects, a wasted opportunity, in others, a good pop album but I really was hoping for more.

it certainly isn't a bad album and actually has some incredible tunes on there. Kylie rarely does full on incredible start to finish albums yet manages to cram enough goodness in to keep on trucking 21 years later...

i really wish she sticked with Calvin Harris and Greg Kursten as record producers...

If I had my way, every album would have Steve Anderson as a co-writer at least. Kurstin is fantastic. He's done Lily Allen's new album and I cannot wait to hear that. Calvin did a good job with In My Arms, but his songs can be samey, so he needs to learn some new tricks!

"...shallow at the moment when one hopes the wisdom of a life well lived would inform their music." - I love that.

I have so much to say on this topic. But I don't think it applies to Kylie so much. I think Kylie is just Austrailan, and by that I mean, happy. I don't think she gets sad. She says she lives brightly and I believe that from her (more so than Oprah). I too wanted to hear a cancer statement before "X" was released, but after hearing X, how could you hang on dissapointment, I think it's perfect, every song, I even like Nudity?!? WAAAAY better than Body Language (that was derivative). And kids have you listened to COSMIC "I'm heeeeeerrrrreee." that was saying something for her, listen again. (But the "X" tour staging and costumes DO looks terrible. Same Same Same. Over-Camp for sure)

I think Cosmic is enough of a statement about cancer - and I really like the words (except for the wonky grammar of "satiate my crave" - isn't crave a verb, not a noun?).

All three women sing about da club, but I only believe it with Janet and even then, she has a man.

Sex addiction CD? I am on that!

I love the whole X saga but here are my tips (like she'll be reading this):

Work with one producer/team only so it sounds like a consistent album.

Record no more than 20 of the best ideas instead of taking 100 songs from dozens of sources then ditching most of them.

Get it out there before it leaks everywhere.

Choose the right singles and release them in different regions at the same time.

As much as I find the loathesome Mr. Bakers' 'fashion direction' tiresome & predicable in the extreme; if he dressed her in a big-bag or a ball-gown, it would make not the slightest bit of differnce, when attempting to justify, or sell, the appauling musical choices, made FOR Kylie, by her Parlophone A&R man, Miles Leonard.

He evidentally has no understanding of her as an artist. He chronicly underestimates the mental capacity of her audience, and seems intergallacticly out-of-touch with current popular music. On this, and every other side of the Atlantic.

I'd be the last one to heap praise on Will Baker, but his efforts just go to highlight with pin-point clarity - that one can't polish a turd.

Give Kylie back the reigns, and let her be an 'artist' again, as opposed to an 'act'.