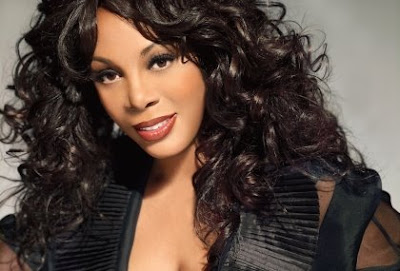 The grand irony of pop music is the notion of disco/dance music as lesser, "lite" music. She loves you yeah yeah yeah is fine, but the orgasmic 17 minutes of Love To Love You Baby is not. This is history rewritten. Follow the timeline and you'll see that disco was, in its own way, a rebellion (against punk music), except that the punks in question weren't white. The disco denizens were black, Latino - not yet merged into "Blatino" - and largely gay. I am not the first to note that, before Andy and Liza took over Studio 54, disco was the sound of the disenfranchised. Donna Summer was unapologetically - for awhile, anyway - their queen. So when people lump together Siouxsie, Chrissie and Debbie as the pop punks of their day, that's not giving Donna Summer her rank. I think it was pretty rebellious of Donna to release a song that sounded like she was getting fucked twenty-five ways to Sunday on the studio floor, don't you?

This is a longwinded way of acknowledging the Queen. With Crayons, Donna releases her first original album of new material in 17 years. At 59, she could have released an album of David Foster power ballads. Instead she called up Greg Kurstin, hitmaker for Lily Allen, Kylie Minogue and Sophie Ellis Bextor, and created a record that is solidly contemporary. Kurstin is 39 (my age exactly), so he too grew up under Donna's influence and gets it.

Donna's "comeback" single is Stamp Your Feet, a literally stomping, monolithic pop song, so powerful when played loud that it could levitate a stadium. The song works because, while it's totally of its time, it does what Donna's best songs did: make you want to cut the fuck loose.

Lester Mendez-produced Be Myself Again is an empowerment ballad that's so sad it doesn't quite empower, which is kind of a relief. The bossa nova mid-tempo Drivin' Down Brazil, another Kurstin track, must be a summer single. It's a margarita of a song; I love the reference to a "lowrise Bonneville." Science Of Love has a melodic, uplifting chorus that, like her legendary Bad Girls album, incorporates rock guitar with beats.

Only two tracks come close to revisiting old Donna tunes. Reggae-pop title track Crayons is Donna in her Musical Youth phase, this time with Ziggy Marley. It's infectious - has Donna been playing No Doubt records all these years? Album closer Bring Down The Reign attempts to update the grandeur of State Of Independence, the 1982 Donna/Jon Anderson collaboration that still gives me chills. Reign has African chants, violins and a certain stateliness, but the chorus doesn't quite lift the song as it should.

Crayons does have a few cringey moments. I am not a fan of the squealing "Ya got game!" breakdown on the otherwise perfect Stamp Your Feet. The vocal treatment on the verses of the otherwise strong Fame (The Game) makes Donna's voice unrecognizable - did she need that?

Strangely, the song that offers the pure "release" of Donna's hardcore disco era, It's Only Love, is not on the US version of the record. At almost 7 minutes, it's a surging, stripped down club track with Donna cooing and wailing over the beat, "I need nothing but you and music." It's passionate and ubercool.

There wasn't a hitmaker disco diva before Donna Summer. She was the pioneer, albeit one with a lucite cane and an orchid in her hair. Diana Ross, bored with her Michael Masser ballads, followed Donna, as did Streisand. Without Donna, there would be no Beyonce and, without Donna, Madonna would not have justified her love. Donna had a vision too, whether it was concept albums about the seasons or female archetypes, the hooker or the waitress.

You may not be old enough to know that disco so enraged straight white men that it drove them to burn records in stadiums. Seriously. Were these "sports fans" (rednecks) trying to kill a subculture by burning gays, blacks and Latinos in effigy? I won't go there. What can't be obliterated: Donna Summer is loved by many for creating music that set them free.

If you looked at me at 21, you could argue that I - white, middle class, male - didn't ever need to be set free. In the early 90's, I was out with a friend in my beat up old car (Cutlass Salon!). When we returned home, the opening part of Last Dance - the dewy "oooh ooh oohs" - was coming out of the boombox on the front seat. With one foot on the pavement, I said "Oh wait, I love this song. We can't get out of the car yet." So we listened to Donna: "I need you beside me, to guide me..." Then the beat kicked in and we just got out and danced beside the car. I'm sure someone driving by was like, "Oh, Jeeeeesus, what a fag." Why do I give a shit? I'm free too.
Posted by xolondon

What a fantastic post! I am more eager than ever to hear Donna's album, and really, I am only a Donna singles kind of guy (I have Endless Summer and the SAW album, but that's it.) I agree wholeheartedly that she could have gone the ballad route and applaud her for not doing so.

I had never thought of the burning of disco records in quite the way you put it, but really, it makes sense. It's funny how that kind of anger still seems to be seething today, sometimes under the surface of polite society, and sometimes, decidedly not.

Bravo Donna! And Bravo XO for such an insightful post.

Excellent review! Couldn't have said it better! Thanks for posting this. Richard

Love the way you take a review and put a personal spin on it so lacking in most music reviews today (the image of dancing outside a parked car to a boombox--hilarious AND inspired!).

I'm kinda excited about this and the new Cyndi Lauper now--albums from grand dames of past eras rekindling the fire in new and exciting ways. I just picked up the Donna "Gold" double disc collection. What a great compilation! Everything from "Spring Affair" to the single mix of "Love's About to Change my Heart" to the aforementioned "State of Independence" (Chrissie Hynde did a great remake with Moodswings as well). It reminded me how much I loved her music growing up, and how much I missed hearing it.

It's totally true about her legacy of course.

Love the new single (minus the annoying bit that bugged you too) and the slight vocal effects are ok as not in the New Debbie Harry league of errors. Only heard a couple of the other tracks, and they were ok.

But that photo! Maybe that's how the album got its title? It's not remotely realistic, now is it?

The new album is amazing. But where did you get that extra track? ;) It wasn't on the advanced promo, was it?

Good news, however, for American fans. "It's Only Love" will be included, along with a bonus remix of "I'm A Fire", in the Special Circuit City edition of "Crayons".

I had to google a lot to find some cheap radio rip - it was not on the CD I received. Thanks for the update on Circuit City. Smart for them, sad for smaller mom and pop stores though. Labels are not out to save true record stores and that's ashame.

Great review, as per usual XO. I'll be checking on the CD in a few days, I'm excited to hear it after seeing all this :)

Brilliant review, I'm even more interested in hearing this now.

I remember discovering my Mother's "I Feel Love" and "Bad Girl" 12inch vinyls at about 11 years of age and deciding then and there that I absolutely loved Donna Summer.

It makes me want to watch the last days of disco again which has a burning disco albums scene. I do remember that they burned it, but not at the time as i was all of 7-10. I'm thinking it was '79-'80? But that's a guess.

I probably heard the disco songs more likely than the punk stuff at the same time 'cause it would've been played on WLEV.

I do remember the "On the Radio."

Love the album and I can play it straight through. Fave track is "Science of Love". I reviewed it on Amazon.

Will be buying it on Friday with my paycheck.

I love my disco and I love my Donna! Great review... again.

Makes me remember when crayons had "skin" as a color...

GENIUS, tv. You are a talent.

Nice blog, This is my first time visiting here.