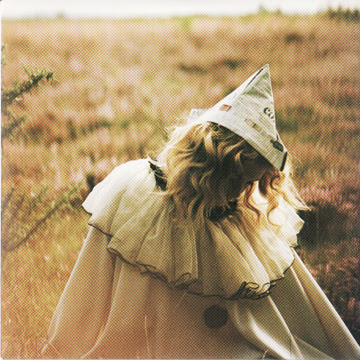 Alison Goldfrapp has shaken the glitter out of her hair and discarded the disco/glam poses of 2005’s breakthrough Supernature. On Seventh Tree, her fourth album with collaborator Will Gregory, Goldfrapp chills out with a collection of songs inspired by early 70's English folkies like Nick Drake, Sandy Denny and Californian Linda Perhacs. Most of the songs are rooted in acoustic guitar, with other instrumentation layered on top. Folky though its roots may be, this is still very much a Goldfrapp album, awash with electronic swooshes, strings and pop melodies.

Pastoral opener Clowns is a clever trick… and a shocking leap into the “new” Goldfrapp sound. Perhaps the most hardcore folk song on the album, the lyrics are actually a diatribe against vacuous, tanned models of the Jordan ilk, whose fake “titties… live on and on and on.” Alison’s vocals are heavily muted, so you can’t really tell what she is singing and the final effect is soothing and naive.

Seventh Tree is a warm, loving record, but its overwhelming mood is melancholy. First single A&E is one of Goldfrapp’s finest moments. It takes a few listens to understand that the “backless dress” in A&E isn’t, for instance, a Galliano: it’s a hospital gown and the protagonist is jacked up on meds as she recalls a night gone wrong. It’s the most accessible feeling – of wanting someone to be something they are not. There’s a sad, recognizable moment when Alison sings, “I’m amazed at you / The things you say that you don’t do / Why don’t you ring?”

At the album’s heart is a trio of three midtempo tracks. Some People is a Rufus Wainwright-esque empowerment tune: “What you thought you lost was just mislaid / All the poems written in your skin.” Eat Yourself, also heavy in the English folk influences, is heartbreakingly pretty, with the odd lyric “If you don’t eat yourself / No doubt the pain will instead.”

Road To Somewhere is perhaps the most sentimental song Goldfrapp has ever written: “Listening to the radio like a friend that guides me / Playing out every song we used to know.” The song is sort of jet-propelled by frequent synths that open up into choral voices. Like most aspects of Seventh Tree, the effect is subtle and elegant.

While Tree is a generally calm affair with no blazing dance tracks, the massive, anthemic Caravan Girl could easily be the Song Of Summer 2008. It’s the aural equivalent of a hippie Siena Miller skipping nude down a beach. The band also unexpectedly channels The Beatles on Happiness. Only Cologne Cerrone Houdini would’ve musically fit into the nightlife scenarios of Supernature. Readopting her stern Dietrich vocal, the track is sharp as a blade, but the lyrical imagery is pure California, albeit again wounded: “See, I’m in your car, but not your life.”

The album concludes with a beautiful, straightforward song about “the folly of a monster love.” The choruses are vaguely 60’s psychedelic, but Monster Love's verses are very spare. There’s a chill-inducing moment at 2:00 where tinkling acoustic guitars come in (“I never thought I would return / To be consumed by you again / But I know a paper moon.”). It’s a typical Goldfrapp effect: little details that take time to emerge, but go right to your soul.

If Supernature represented a night in an underground nightclub, Goldfrapp’s new album is a walk in the woods. There is little “makeup” on the lyrics – they are clear and honest. Glamour wouldn’t be glamorous if we lived it 24/7. Seventh Tree is their finest moment, a gorgeous and necessary comedown.
Goldfrapp A&E streaming audio
______________________________

Play Seventh Tree at Goldfrapp’s myspace. Scan via Goldfrapp.free.fr
Be sure to hunt down the Gui Boratto remix of A&E. Amazing version.
Posted by xolondon

"Alison Goldfrapp has shaken the glitter out of her hair"

reminds me of a joke I heard: glitter is the herpes of arts and crafts - you can't get rid of it.

Incase I haven't said this before... I love your site! Thanks for the great review. I can tell how this album has touched you.

Thanks El Marv! An alternate review would be: I FUCKING LOVE THIS ALBUM.

That review above is actually the super long version of a 150 word review I did in the March Instinct Mag (with JG Calderon on the cover).

Fantastic review! Admittedly I was a bit worried at first with all the talk of folk music, but this is the most warmly engaging record Frapp have made. Like you said, no glamour without nature, and they have never sounded less jaded. Hopefully this doesn't mean they have abandoned the Black Cherry sound completely, just taken a break to add another dimension to the arsenal.

Seventh Tree is a future classic to sit alongside my copies of Cocteau Twins "Treasure" and Kate Bush "Hounds of Love".

Count, it's funny you should mention Cocteau Twins, as 'Little Bird' (to me) is Alison + Will channelling them (at their finest). Liz Fraser would be proud!

I am glad that Goldfrapp took a 'different' direction with 7TH TREE. Another 'Supernature' would have been fine, I am sure (Goldfrapp DNA is imprinted firmly in my pleasure system, so anything they do is palatable to these ears) but this album makes me fall in love with their musical genius all over again.

My copy is sitting next to me right now. Finally released into the shops at last! Your review says it all, I shall only do a minimal one.

Did you get the box set version with the DVD and extra tat?

Don't you think that Cologne Cerrone Houdini is a little like the Bond theme they should have been asked to do by now? It reminds me of Brigette Bardot in places, too.

I was already buying this album on Friday, but now hearing news that the booklet opens up into a poster of Alison/Owl, I'm almost tempted to buy two.

The surprise is that the owl is Will with a big headress on. Seriously! I bought the special edition and quite like it, although the DVD is "pants", DP76.

Cologne is one of my fave tracks and was a standout from the first listen. I can see a Goldfrapp tune in this vein being a Bond theme, for sure, even the song itself!

Happiness & Caravan Girl are my other faves at present. It's funny, though, my "fave" list seems to change with further listens. Sign of a damn good album, if you ask me.

well you know... Goldfrapp was supposed to do the last Bond theme. She even announced it at one of their concerts. Not sure why it didn't happen.

Terry's comment is the second time that I've heard someone reference Cocteau Twins and "Little Bird" (the other was a close friend who is a HUGE Cocteaus fan). I can totally see it, especially in the second half of the song when it gets all phychedelic. I LOVE IT.

Thanks to Terry and Joseph for commenting (well, everyone!) - the more the merrier anytime!

I have been playing Rilkean Heart today, which is kind of Seventh Tree-ish, no?