XOvision: It may be pills at work. 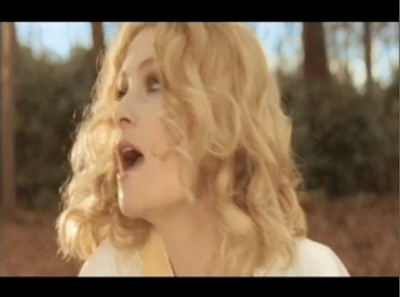 Click on image to watch the video. I can't embed it.

Leave people. Tree people. A fabulous fox at 2:37ish. Alison looking like Madonna. And a nice cameo from the mysterious Will Gregory, the Greatest Musician You Don't Know. One of the Top 5 Goldfrapp songs ever. Seems like a fall song though, and not just because of the campout.


I only have two photos in my hands. I. will. only. call. two. names. [pause] Congratulations Heidi and Keisha, you are still in the running towards becoming Britain's Next Top Model. [whispers] Thank you girls.

Amelle, return to the loft, pack your belongings and leave.

It's going to be an uberbusy week for me, so I can't promise much blogwise. Unless, of course, that damned Madonna song leaks...
Posted by xolondon

Like the Fallen Leaf people, I too bow before Alison Goldfrapp.

Actually I do know Will Gregory to be a great musician. This is a fantastic video. Thanks for posting it.

Yes, Will Gregory is a great musician. That's why I love Goldfrapp so much. You can tell that Alison has a similar understanding of music.

About the Janet... It looks so... cheap. Now, I do my fair share of green screen (see my holiday video), but I don't care if it looks cheap. She should have worn that last outfit throughout the entire video. ALso, her face reminds me of Gary Coleman in the video. UGH!

Goldfrapp video is really cute, am loving it. And I'm REALLY loving that Sugababes one - M-I-G-H-T-Y-F-I-E-R-C-E. Though I do think you may have gone all Marisa Tomei on our arses and read out the wrong names in that envelope, because I'm pretty sure Amelle's IS still in the running... ;)

I can't even listen to that Janet creature anymore. Meh, and to think I loved those good 90s albums so very much.

Alison does look like Madonna! Right on the money, as usual Xo.

Love your ANTM reference with the Sugababes! I can so see Tyra saying that. It's very sad that Amelle's BF got hacked up by the machete guy on Christmas eve. Sucks to be him right now. I read somewhere that it'll be 2 years minimum for him to recover. yikes

CAN. NOT. WAIT. FOR. GOLDFRAPP. ALBUM.

I never realized what bug-eyes Amelle has.

And I couldn't be more underwhelmed by the Janet video.

I just want to know who convinced Amelle that posing like you want to get fucked in the ass would make her seem as posh as her bandmates just laying about?

At least she can sing.

What the F? What a boring Sugababes track to release as a single...where's "Surprise"?

I love how Goldfrapp can show what a few tree people and some leaves can do. I might have preferred hand-held digital shots of her from the glorious photoshoots, but I guess somtimes simple can be TOO simple (see Gwen Stefani-4 in the Morning). The song is so great, I'm worried the video will be too distracting for those who see it for the first time instead of just hearing it.

Sugababes concept is cute, straight off their Top Model head shots for Change. But if this is the new era of Janet, I'm not totally convinced. Why does there have to be so much CGI in videos now, leaving the artist looking rather...hollow? That being said, thanks J for keeping the clothes on, even if they are leftover Rhythm Nation jumpsuits.

Oh, and Tyra called & she wants her weave back.

Second the Surprise love along with Never Gonna Dance Again. The Janet video makes no sense whatsoever. I was reading comments on some other board and someone said

"The only think that makes sense in the new Janet video is that she's going to have to travel to another galaxy to have a hit record again". LOL!