Shelby unlocks the do' to your heart 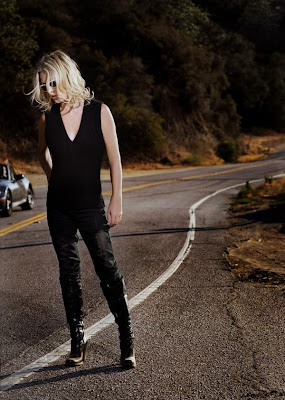 She's old school. Doesn't own a cellphone to call Triple A

While I know the ideal prize in a Shelby Lynne contest would be to have a drink and a smoke with the lady herself in a dodgy old bar playin' Dusty on the jukebox, I have the next best thing: her new album... signed. Answer the trivia question below and your name will be put in the hat. I'll pull the winner on Tuesday.

The question: Name Shelby's famous sibling and what that person does for a living. It's getting harder to come up with trivia questions in the age of Google. Email me your answer and name. I'll contact you if you win. The prize will be sent from Filter in LA. Once again, this contest is for Americans only - not my rule, but I don't have to pay the postage.

Just A Little Lovin' is released January 29th, so les miserables who don't win can just buy it. Remember this is a special album: Nine of the ten tracks are songs originally sung by the great Dusty Springfield. The press release says that producer Phil Ramone recorded the songs live on "two-inch" tape, whatever that means, at "legendary Capital Studio A in Los Angeles." I think this means the whole affair is very old-Hollywood-faithful? The new track Shelby wrote is a countryish guitar ballad (surprise!) called Pretend.

My favorite song on the record is the heartbroken yet dignified I Don't Wanna Hear It Anymore. A good tribute album should make you aware of songs you've never heard. Closing track How Can I Be Sure is another keeper.

Speaking of the City Of Angels (home D'luv), Shelby is going to be at The Last Great Record Store, Amoeba Records, on release day - January 29th at 7pm. Be sure to check out the amazing album cover for Just A Little Lovin'.
Posted by xolondon

2 inch tape is "analog" for the rest of us. Warmer sound.

Shelby is an incredible artist. I've seen her perform a few times. She sounds the same as her albums. No production magic to make her sound that great.

As for Phil Ramone, I had the pleasure of doing work for him. He's a master producer with golden ears. Very nice man. Great choice for this album.

Has anyone noticed... in the several Shelby interviews I've ready lately, she's skirted around the issue of relationships. She refuses to talk about her love life. Could it be possible that she shares something else with our beloved Dusty?

For all of you Shelby Lynne Fans there is only one week left until the release of her 10th studio album, Just A Little Lovin' on Lost Highway Records, Shelby Lynne is celebrating with a special Amoeba Records in-store on her record release day Tuesday, January 29th at 7pm.

Dont worry if you cant make it to the show. Shelby's performance will be broadcast live on the Amoeba Website. But try to make it there!!! Her new album is insane!!!!