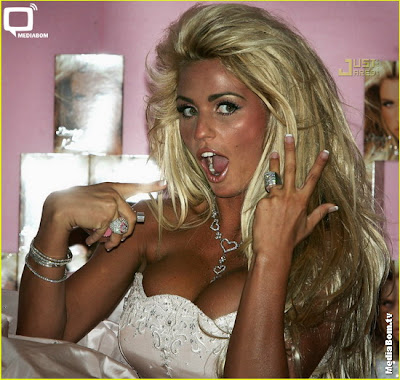 My life is just an image of a rollercoaster anyway. I keep thinking of that EBTG line lately. I cannot say I am "well chuffed" by how 2008 has begun. I keep joking that it's the Year Everything Finally Goes To Hell. To bolster my mood, I've chosen a Jordan pic for this post! I love Jordan and read about her adventures via Heat Magazine each week. Sheis an authoress and glamour model. Click to see my fave pic of Jordan with her family. Yet another reason to emigrate to the UK... btw, the link color is in her hono(u)r

I like how Pop Muse called Roisin Murphy "the new Grace Jones." Although "Ladies and gentleman, here's Roisin!" does not have the same effect.

My post on Scritti Politti got a record number of comments for this blog. WHO KNEW? Anyway, I just noticed another Scritti post at Modern Music (I've linked to the 80's posts).
A Brit fave shared by Paul de Zappin and myself is now set to return: Captain's new 6-minute single (how commercial!) is called Animal. Stream it now on their scroll-crazy myspace and you'll note the sound is decidely rockier. The song is so damn long that it has an attic, a basement and a trailer out back. Can't say I am loving it, sorry to say.
When I heard the name of REM's new album - Accelerate - I thought "Didn't they already have an album with that title?" This will sound odd, but it was the same feeling I had this week when I heard that Maragret Thatcher is still alive. WHO KNEW? I thought for sure she'd died years ago! Anyway, remember when REM had real album titles like Lifes Rich Pageant and Fables Of The Reconstruction?
ElMarvelOso just did a post on Beyonce's bad lyrics and it made me think of a wonky lyric on the new Kylie CD. It's on a song I love, All I See: "There's nothing that can break us apart in two." Err, yes, "apart" or "in two" will suffice. Just sayin'...

It's hard to believe The Feeling are about to release a CD. They seem to have disappeared. Their website has not been updated for a month.

Expanding on Alison Goldfrapp's recent comment that everything's artificial, Robyn tells The Times this week that "We have artifice and then we have ‘real’. We’ve lost the in between.” She's coming to America, by the way. More on that Friday.

Sasha Frere-Jones writes a Kate Nash review in The New Yorker this week. He offhandedly labels Adele an "unbearable neo-soul singer." Reee-ight. While he does write a nice description of Nash's single Foundations, he later talks about the "juvenilia" on the record. Right again, dickhead, she's 19.

Lost In The 80's isn't really dead, it just moved to Jersey.

Access Hollywood did a piece on Jennifer Hudson's album and the music sounded terrrrrible. The production team in the bit was The Underdogs, who are nothing special, to my ears anyway.

The B-52's are sure lookin' fresh! It's inspirational. Skinny pants help, take it from me. Modfab did that post on their upcoming return and I totally agree that they influenced the Scissters, not the other way 'round. If anyone has an MP3 of their version of Yoko Ono's Don't Worry (from the vinyl version of Whammy!), please send it to me. It's a longtime fave and I cannot find it anywhere. Update: thanks to the lovely person who sent me an MP3!

Sia's new CD has a lush version of I Go To Sleep. She adds a string arrangement that seems perfect for the song. More on that record soon. It's got some stunning songs, but is a little heavy on the ballads.

Amy Winehouse is a yellow blonde? Holy shit. My tears won't dry on their own. sorry, bad pun

Finally, Philly, I am checkin' up on you this weekend. I'll bring my own disco string section and pray I encounter Miss Patti.

Yes, but has Roisin choked on her saliva?

Love Whammy! Did that remix album ever come out?

The only thing I've heard is that Shirley left Garbage and is working on something. I miss her and her wide eyes. (Did anyone see the picture of her inside the Absolute Garbage package? Very funny.)

I am surprised you love Jordan xo! I think she's absolutely adorable, and I believe she's on my turf at the moment too?

I assume you're taking the piss about Jordan. She's an orange tramp with ridiculous boobs, a husband who was a terrible failed 90s popstar and her ghost writers spew out endless knew books "what I did write." Her books sell extremely well in my shop, which disturbs everyone who works there. They sell only to women with screaming brats who usually swear at them to shut them up. They have orange faces and yellow hair. They scare me!

You forgot to mention that you now have a vagina, luv...

Jordan's official home is really OK! magazine though; the weather just seems chilly whenever she's not on the front cover (usually either Kerry Katona or Sarah Harding instead).