I've got Adele's back 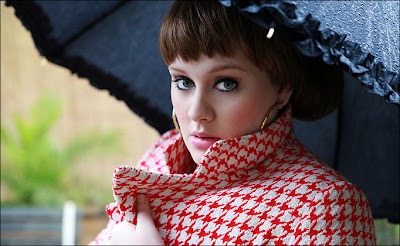 Adele releases her new single Chasing Pavements this week. She calls this song her "Celine Dion moment" because it's a belter. Here's the thing that's on my tit: The PopJustice Forums have decided she is the devil and (other newcomer) Duffy is a superstar. Literally.

A few quotes on Adele from PJ, all from different people:

"Crap song, fat head, ok voice!! - she aint even interesting to look at."

"I haven't even heard anything from her and I hate her already."

"No charisma, writing ability, vocal ability or even looks."

"She's just a big, boring lump of nothing isn't she?"

Now, about Duffy, who just released an uptempo new song, the dancey and slightly shrill Mercy:

"I really loved Rockferry, but this too is amazing."

"I love her, she'll be massive this year... as far as I'm concerned this is going to be one we remember this year as a 'Great Pop Record'."

...and one comment about how Duffy is more real than Lucky Soul. That has no grounding in reality, but it's an opinion, so there you go.

Part of this comes down to song tempos. Seriously, kids often don't like slow songs. But proclaiming Adele a talentless failure and a "heffer" (sic - it's heifer, dumbshit!), while talking about Duffy having a long career is apparently de rigeur. Why? Obstensibly because the Music Industry is shoving Adele down our throats - she's too "hyped." Right. As opposed to Duffy, who also made every Tops for 08 list and whose album has been in development for three long years? Equal hype. Duffy is also a cute, tiny blond and the love child of Baby Spice and Dolly Parton. Adele is plumptious and says she likes to drink and fuck.

See the language of the messageboard criticism on Adele and it almost always brings her weight up, however subtly or not. Of her body, she told The Sun this: "I’ve read some horrible things about me, but my size has never been an issue for me. If I wanted to lose weight, I’d lose weight, it’s not that difficult. I don’t feel any pressure at all. I’m happy with the way I am." I don't know how anyone else feels, but I think slamming someone for their weight is bad karma that will add on the pounds in later years [which makes me wonder about my stomach, but that's another tale].

There's also the constant refrain that people want a Strong Personality in a female pop star and when they get one, they often scream, "What a cunt!" In Adele's case, they sort of lump her in with Lily Allen, who's the icon of baited quotes. Adele is 19 and very open, though I've yet to read anything where she talks shit about others. I love that she's honest in The Sun piece about loving Destiny's Child, The Spice Girls and East 17.

I won't delve too deeply into the fact that Britain cannot seem to produce a black female soul star. The recent successes have all been white girls who sound like they were raised in Baptist choirs. You tell me what the deal is there. The black singers exist: Jonte Short from Fried could have been a huge star.

Adele's 12-song album 19 is out on January 28 and I've heard four solid tracks from it thus far. If you don't like her, well, you don't like her. Fair! The point is, perhaps, that I like some thoughtful basis for sweeping criticism of an artist whose album has not even been heard. The Cycle of Build Up/Tear Down has reached an absurd speed this month.

pic from The Sun
Posted by xolondon

Email ThisBlogThis!Share to TwitterShare to FacebookShare to Pinterest
Labels: Adele

My friend over at Billboard told me about Duffy a while back. I took a listen and thought "Here's a girl who is deliberately affecting her voice to get a sound." I wasn't impressed.

From the snippets (wow, that would be a great girl group name!) you provided by Adele, I've already placed her way above Duffy. Her voice is full of spunk!

I love voices with character. I love good songwriting. It's sad to see that some people put image before talent.

adele is stage school, duffy is school of hard knocks

I think the age range of the crowd going for Duffy is much wider than that going for Adele. No doubt Adele is much more relevant to her age group than Duffy, but there's something lost and sad in Duffy's voice that appeals to an older crowd.

You are correct: the voice is an instrument.

The way a guitarist gets a sound is by the way he/she plays it and phrases. If you want to get into the timbre of guitars, you have to start comparing brands and models, not players.

Aretha's voice is natural. You can hear the similarity of her singing voice with her speaking voice. She is not deliberately affecting the production of her voice for a sound.

yes and Duffy's singing voice is also similar to her speaking voice ... of course she has worked on controlling and perfecting her vibrato and melisma ... do you think Aretha didn't?

Like both of them, they're both similar and that's how the big record industry machine works. The big diva retro thing is in. Duffy has the Bernard Butler magic and Adele has the big tragic song but they're quite similar aka very Lucky Soul, as we've said on here before!

I hate the weight obsession of the lazy puny journalists. So irrelevant and tedious. It's the voice, innit?

Fried? Oh yeah, I loved that album. Didn't they re-release it for no good reason a while ago?

Amy Winehouse is stage school, Duffy is the school of hard knocks?

I didn't get that either. Neither is the school of hard knocks, IMO.

If the point is that they are not really comparable, that may be true. In fact, Duffy is really the one who is most like Amy Winehouse, stylistically. Minus the drugs! Adele is much more of an acoustic artist - a woman onstage with her guitar. Which is actually the way Amy started, I think! You'd never know now that Amy W even plays a guitar, poor thing.

Adele has a really nice coat.

Who the fuck is Duffy? I think it added me as a friend on MySpace two years ago. Jesus, I gotta delete that account.

OKay, just had a listen to both.

d'luv, I like her coat too. And she smart sporting that umbrella - UV protection.

lol. referring to Duffy as "it"!

I liked what I heard. Sounds nice, and somehow quite different. Still I'd put her amongst those "cool girls" from the new generation which seem to bore me a tinny bit. Glad she likes the Spice Girls thou!

I don't get why they are pitting Duffy against Adele; they have a very different sound, and something that can be enjoyed from each of them. Calling Adele anything other than brilliant is simply retarded, in my opinion.

I have got her back too.

Okay, really. lol An artist wins a Grammy or two and is automatically dubbed "evil" by indie blogs.

Come on, guys. They both have talent. Adele writes her own songs. She's a singer/songwriter at age 21. That's impressive. Recognize that, instead of just listening to a couple of songs.