I have a picture pinned to my wall.

For years I thought the above line was "I have a picture into my wall." What was I thinking? KulPop has good news that The Thompson Twins are getting the remaster treatment in March. KulPop has actually written about the Twins before, with a great a Where Are They Now post.

I could not really do a "Top Ten Plus One" for this band, but my faves include Lay Your Hands On Me, The Gap, Hold Me Now, King For A Day, and my absolute fave You Take Me Up.

I am such a whore for these remasters. I buy them, salivate on the liner notes, load the songs onto my iPod and never .play. them. again.
Update: I found this blog with lots of info (though dead links). I am now obsessed with finding the original UK 12" single of Lay Your Hands On Me (see below), produced by Alex Sadkin, not Nile Rodgers. 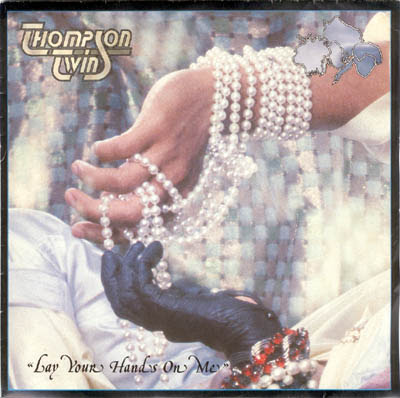 I remember thinking how cool all the pearl styling was at the time.
Posted by xolondon

Email ThisBlogThis!Share to TwitterShare to FacebookShare to Pinterest
Labels: 80's

Never was much more than a casual fan, and the only thing I ever bought of theirs was, naturally, their flop 1989 CD with "Sugar Daddy" on it. Actually, I got it for Christmas by request... it was one of the first albums I ever had on CD. It sucked.

So, next time, a request for that Blow Monkeys post! And touch on how "Digging Your Scene" was the first commercial pop song dealing with AIDS.

And I bet that broad in the picture has a picture of Frank N Furter pinned to her snatch... and by that, I mean the broad on the far left.

I bet that you have a picture of that very broad pinned to YOUR snatch.

Their first three albums were quite good. In The Name of Love, Love on Your Side, If You Were Here. The import of Lay Your Hands was really good but they messed it up in the album version.

Love the twins! All three of them.

I loved the re-produced version of "Lay Your Hands On Me". The Gap kept me clapping. "Get That Love" was such a feel good song. "I AM THE QUEEN OF THE USA" - great quote, Debbie. Babble was interesting.

I totally know what you mean about remasters. It's amazing to hear these nuances that were buried in the inferior mastering of the early CDs.

By the way, my sister and I used to sing "I have a picha, pinned to my wall". It's a spanish thing.

Always had a strange teen crush on Alannah Currie. Funny how I married a woman with similar features (except she has eyebrows, no shaved head, larger lips, and no snatch pinning...by the way, what's up with all the snatch talk lately...see recent ABC post here).

I loved the Eurythmics remasters, so I hope to love these as well. Are they doing all the albums, or just the popular ones (Side Kicks, Gap, Future Days)? Just heard about a 4-disc Yazoo remaster that has me crazy with anticipation!

You never play the remasters again? I do! Now if they could just do (my wish list):

Most are Warner and EMI titles, and they sound like crap compared to most other new discs out there now.

Thanks for posting the link to my two posts on the Thompson Twins, news of these reissues is great.

There are a couple of people selling the U.K. 12" single that has the orginal remix of Lay Your Hands On Me on eBay (the artwork is slightly different than the image you posted which I believe is from the 7" single).

If I can dig out a cd I have that has that original Alex Sadkin remix sometime I'll try and post it on my blog.

The Twins are one band I LOVED back in the day but really just don't have the time for today. It all sounds so dated and not in a fun way (with the exception of "If You Were Here").

That Sadkin mix is on one of the Living In Oblivion comps - it's the single version, though.

i went thru a very brief period where i was so-ooo into the Thompson Twins. i think it was during the hiatus of culture club and duran circa 1985-1986 and the twins released future days. they did the pearl look so well. i ended up winning a signed copy of their 87 flop albun close to the bone. they latter became babble and are now based in New zealand where they still prodcue lots of bands

Actually Tom & Alannah got divorced a while back & she moved back to England. They do have a son together.