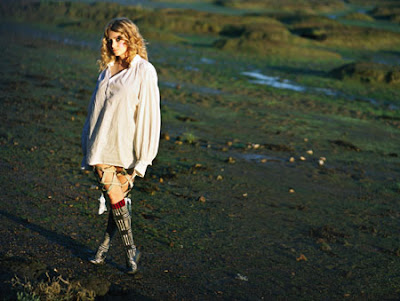 KCRW in Los Angeles has started playing Clowns, the first song on Goldfrapp's beautiful new album Seventh Tree. The album is a sharp turn towards the "pastoral", and this song is the most extreme example of that.

I cannot wait to hear Clowns in high quality - the leak is indecipherable! It is radically beautiful, like orchestral folk music. Q accurately describes the vocals as a mix of Sandy Denny and Kate Bush. Take a look at the Q piece now - Alison, who looks exactly like Madonna in the photo, always has something clever to say. She says of the new album:

I see a choir, a childrens' recorder group, and girls in big blouses playing glockenspiels.

The piece also references the New Seekers' Coke commercial. The New Seekers sang I'd Like to Teach the World To Sing and Coca Cola did a commercial based on it (or maybe vice versa), though New Seekers did not appear in the commercial or sing on it. Regardless, the point is the mood of the song and commercial, which is decidedly hippie, or as my friend Thom says, "prairie" music:

Alison recently told MÄNNER that she tried to avoid the record company "as long as possible" when they finished the album (read this in English at iHeartBerlin). I don't know what they're worried about. It's as good as Supernature in its own way. I love what she says when they ask if Goldfrapp will leave behind the "staginess" of its last few records:

Definitely not. I don’t believe in naturalness. Everything is artificial. Goldfrapp has always been about fantasies and a certain kind of drama.

The hospital-set single A&E is out on February 15 with remixes by Maps, Gui Boratto and one called the Hercules and Love Affair Remix. I believe Arjan has an interview with her soon, but I have not seen any other press yet.

If you've not heard Clowns, you might try this blog to stream it... though I doubt it will last there long.

UPDATE: See post above for the album cover!
Posted by xolondon

Just beautiful. Goldfrapp is one of my favorite groups. I love their creativity.

"Caravan Girl" is pretty much a straight-up pop song. It would be a strong choice for a single.

"Clowns"... was this written for our President? ;-] I love Goldfrapp's dreamy songs. Their use of strings and pads is incredible (like "Time Out From The World").

I still think the sound is muddier on that MP3 than the final version will be. I HOPE!

Yes, I agreed that Caravan Girl is a great (summer?!) single.

Makes picking my favorite album of 2008 so easy. I love this new Goldfrapp album...

This is easily an early contender for album of 2008. I love their maverick spirit in embracing new things full on. Is there anything they won't try? Reggae? Gypsy-punk? Tibetan chant? Brave and lovely!

It is indeed a brilliant start to 2008. Other artists should be so lucky to do a record this great. I only sort-of-dislike one song and it's one that could easily be a big single (Happiness).

Am also thrilled to see some new (or relatively new) people commenting these days. YAY!

It's interesting - where she says that everything's artificial. I love Goldfrapp, but I'm also a fan of Sophie Ellis-Bextor. In one of her songs she declares "nothing's artificial - it shouldn't be a word". And Sophie is actually a fan of Goldfrapp (or at least was). I find this quite curious.. haha maybe I'm just weird. that must be it.

You have an awesome blog here! I see we have much in common. I too was brought up to the sound of the synthesizer (and owned a few) in Maryland.

Goldfrapp is the kind of group that you play for your friends and they get into it right away. From the few samples I've heard, this album will definitely be my first top 10 contender for the year.

I think the muddy far-off sound, as if it's being muffled by a wall, adds to the atmosphere of the song.