Mixtape: Here is where the sky is blue 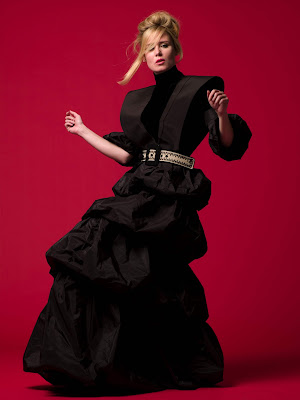 My Christmas tree is extra pretty this year

Andrew Davies did a remake of A Room With A View. Have you ever heard of anything so pointless? Really! Don't even go there mister!

When I saw those pix of Amy Winehouse in the street in her underwear, I immediately thought about her parents and what kind of turmoil they must be in. I was apparently having a psychic moment, because Amy's mom wrote a public letter that is really heartbreaking. I hope this time next year Amy will be in recovery. I must sound like an idiot, blathering about some pop star I don't know, but this story really bothers me.

I bought the Scissor Sisters DVD called Hurrah! The documentary is a bit of a mishmash, with constant obligatory shots of the band walking through arena hallways toward the stage / screaming crowd. Never seen that in a concert film, right? Likewise, the stage show is not all that wowsers. I think the first DVD is much better... and of course the first features a flapping cameo from Jake's peen. What does come through is that they seem like a really nice group of relatively normal folk who are old enough to absorb their fame and not fall to pieces.

I also watched the DVD concert that came with U2's remaster of The Joshua Tree. It's clearly the footage used for the screens at an outdoor show in 1987, but that's fine because the focus is on Bono's face. It confirmed to me that Bad is one of the finest songs ever written. The performance of With Or Without You literally made me cry.

Spice Girls. I actually had the records in the 90's, but prefer the ladies solo. If the cheap tix were not over 100 bucks, I might go for shits'n'giggles. But you can read Spice reviews not only at Chartrigger, but also at butch Johnny's. For the record, my fave SG songs are: Mama, Too Much, 2 Become 1, Viva Forever, and Weekend Lover.

Glad to hear Madonner's album is not called Licorice.

Did I say I am making my Christmas cards this year? It's ended up costing a lot more than normal cards. Whatever, I am kicking it Little House On The Prairie style. I am also trimming on the presents. The only ones I am giving are to my parents and my various kids (friend's children).

Retro Wonderland is jingling its balls. Be sure to download the Sandra Bernhard White Christmas piece. It's a "gentile" classic! "Oh God, Chip, you are so cuuuute! I wish you weren't my brother so I could fuck yewwwww!"

Note that the above statement is not quite in keeping with my earlier comment about Jake Shear's penis. whatevrah.

I am also very bahhumbuggery about my work's Christmas party. It's like forced fun and I am literally thinking of working through it. I just recoil when people order you to make snowmen and shit. And it should be noted that I am quite a festive person, really!

Britpoppery: Captain's next CD is not too far off. Here is a live review of a recent show. The Kooks' album is due in March-ish and is called Konk.
Meanwhile, Lily Allen has released a cover of ELO's song Mr Blue Sky. She needs to stop with the covers and make up with Mark Ronson. Remember when Lily was just a girl riding a bike through London? Those were the days. It's not a sellout to lose weight, of course, but it is a sellout to do loads of press about it. Don't cry when you gain it back and they focus on that, Lily.

Matinee Club was dropped by Universal but is still releasing their CD (digitally) next week [thanks How I Learned...!]. Don't get excited - fans know all the songs. I hope they can make some money off it, but really the party is well and truly over.

The movies I want to see at Christmastime: Atonement, The Golden Compass and Juno.

Morrissey's next single is called That's How People Grow Up. If I didn't comment on the Moz/NME drama, I won't start now.

ABC is finally releasing a new album called Traffic on February 4th. The first single is called The Very First Time. It would be lovely if Martin Fry would speak with pop blogs. Let it be known that The Look Of Love is one of the Top 10 Songs of the 1980's and perhaps all time.

Janet Jackson's song Feedback (from her album due in...doh!... February) has leaked. Not impressive! It's all vocodered so it's not identifiable as Janet AT ALL. It also has some Madonna-isms. Catch 'em? Not to mention references to her period. Not as shiteous as her last two singles though... UPDATE: Hear it now at her site.

Finally, some odd news: I met Darren Hayes last Thursday (in a snowstorm) at a performance inside XM studios. How strange it is to have played Casey like 2500 times over the last 5 months and then end up in some brick building on the edge of DC listening to it performed before 25 people. The reason I never wrote about this? Hmmm. Darren was in great vocal form, witty when answering the DJ's questions, and he did meet everyone individually, but I sort of felt.... distant. I have never been comfortable meeting celebrities - I have nada to say to them in those circumstances. As polite as Darren was, this was the tail end of a long tour and I just felt like... the "next in line" (as another blogger said to me). I am not upset or turned off or anything; I just don't know what to say. It was nice that they brought in an audience, but I'm glad I did not sacrifice a full day's work for 4 songs in 30 minutes (promoted as 60-90).

The Janet song is meh. Really meh. Hasn't struck ANY chord with me; good or bad. I really hope it's not a sign of things to come.

Atonement was superb. I was very impressed.

The Golden Compass was entertaining but a disappointment in many ways. They made some really poor decisions in my opinion, particularly when it came to how to end the movie.

Room With a View, it was a real cheapo doppelganger. And this Christams, the BBC have lavished time and a lot of money on a rarely touched classic Oliver Twist (sheesh!)

New ABC stuff... double yay! Do you know if Mark White is involved. He had retired from music the last I heard (that VH1 doc, Reunite the Band).

I finally got 'round to listening to the Janet song. It is leaps and bounds better than anything on 20 Y.O., that is for certain. That is also not saying much.

It's catchy, but the vocoder is so, I don't know - 8 years ago - and did not catch that period reference! Will have to listen again.

ugh i am so over janet, just like i am over mariah which is tragic becuase i loved them both immensely during the 90s. Sigh. Oh! And i hate meeting famous people, it makes me nervous. Especially when their show isn't what it was promised to be :(