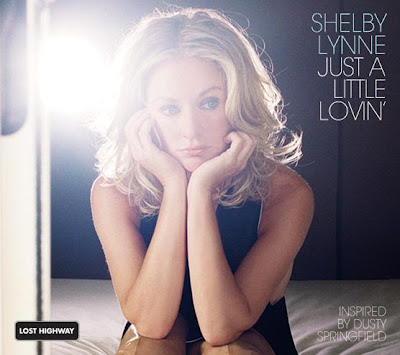 WOW. She's back! Shelby Lynne, singer/songwriter of one of the greatest songs of all time (Killin' Kind) has grown out her hair and recorded a Dusty Springfield tribute album! This is big news, as Shelby is one of the best female singers alive - her vocals are no bullshit, all honesty.

And did I mention whose idea this album was? Barry Manilow. True story. Hear samples at Shelby's myspace

My Top Ten Plus One Shelby Lynne songs:

and the rest in no order:

Shelby's best album is called I Am Shelby Lynne but she does have a Hits Collection. How about that album cover above? I'd like a vinyl version please.
Posted by xolondon

Email ThisBlogThis!Share to TwitterShare to FacebookShare to Pinterest
Labels: Shelby Lynne, Up In 08

Never expected you to move in this direction! Leavin' is an AMAZING song (really anything from I AM SL). Looking like a ho on her last CD cover didn't help her US career though. Who let that slip out at the label?

She's had a ROUGH life if you've ever read her story. Tragic childhood.

We just posted at the same time. Jinx! Owe me a Coke.

I love Killing Kind such a gorgeous song, and i'm excited to hear this album. I adore Dusty Springfield so much. BTW did you hear the duet Shelby did with Anne Murray on the latters duets album> If not let me know!

Hey -- I've loved her for years. Have you ever seen her LIVE? (She weighs like 20 lbs. but commands an Aretha-size presence.) I saw her at a KCRW Sounds Eclectic thing a couple years ago and she blew everyone else out of the Wiltern... now... moving on to the new record... I peeped the clips on MySpace, and I'm a bit disappointed. The arrangements are blah and pedestrian; so bummed that Phil Ramone produced it... remember that awful Sinead O'Connor standards record he did?? Same thing here. Stripped down is fine -- but why? This sounds too Starbucks.

Phil Ramone did a good job, for instance, on George Michael's version of First Time Ever I Saw Your Face. He's not David Foster! I would expect her to have a heavy hand in anything she does, so I am not too worried. We'll see! It is hard to bring something new to some of those Bacharach songs.

I did see her live once in like 2000 - she opened for someone else (not sure who it was?) and she was almost overthetop rock and roll chickish. Like leather pants and bad dye job and too much Whiskey and maybe a quick clothes-on fuck in the bar bathroom! But yes, that little spindly woman can SANG!

I saw Shelby live last night in the ATL and she did mostly the DUSTY songs and some of her "rock" stuff. I will be honest I am a bigger fan of her country and swing stuff, but she was BRILLIANT.

She has an amazing voice and she sang non-stop for 2 hours. It was absolutely one of the best concerts I have ever been to. Well worth more than the $25 I paid.