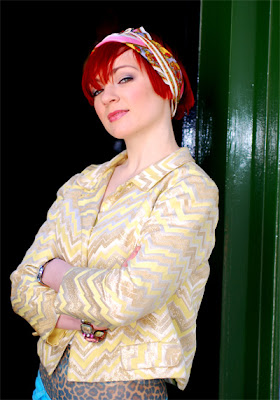 Who is Antigone? When her album is released in 2008, she'll arrive to find a seat on the banquette with Roisin, Kylie, Siobhan, Sophie, Alison, etc. I mean it, this girl is the real deal. A singer who can sang. A writer with a unique lyrical voice. A quirky, kicky "People's Diva" type.

Why should anyone care? That her forthcoming album was produced by her longtime collaborator Shave is reason enough. He made a splash this year by producing Darren Hayes' double album This Delicate Thing We've Made. Antigone's debut has a pop heart, but it's laced with elements of jazz and electro. There's even what I might call a "ragtime" pop moment and a bit of rock. A fusion pop record all dressed up for a night in the discotheque (and the afterparty!).

I've known I wanted to write about Antigone since I became obsessed this summer with her nighttime ballad Life Without You (which was on her myspace at that time). Because the music hasn't really been heard, I thought I'd ask her to just explain who she is and how she got here.

Although Antigone isn't giving away the goods quite yet, I will say that, among a clutch of great songs is one of the most epic pop/disco moments of the past few years. Your hair will fly back when you hear it. Your heels will become stilettos and YOU. WILL. PRANCE.

Antigone! Who are you?

My full name is Antigone Foster. I'm the next girl off the ranks in this ole' diva game, but like any solo artist worth their salt, I've been performing, writing and releasing music for years.

Okay. A diva can tell the story of her youth in a minute...

[I] grew up in regional Australia in a creative hippy family. Endured a troubled adolescence and then moved to Sydney to undertake a degree in the arts. Dabbled in bands throughout Uni but didn't pursue music professionally until I left, when I realised that even a first in film theory wasn't going to land me a quick buck (fancy!).

But you didn't become, like, a showgirl or an opera singer?

After experimenting with all sorts of genres, I settled on a combination of pop-structured songs riding a bed of electronic music and pumped out a few disco numbers with a few disco artists ([love] tattoo, Shapeshifters and my own project Etherfox)... before arriving at my own secret disco in AntigoneLand.

Everyone will ask you how you got your name.

Daddy did it. He's an intimidating intellect, a satirical novelist and poet obsessed with classicists like the foul-mouthed latin satirist Juvenal, whom he recites on his way to buy the paper in the morning (he prefers writers to real people as friends, but it is preferable they also be dead). I've asked 'why Antigone?' throughout my life; he's mumbled something about honesty and loyalty.

You are a throwback to the days when singers actually trained in music...

I learnt piano from 7, but never did exams. It was all very ad hoc and hippy. I got sick of the discipline and the lack of creative interpretation with classical so I moved onto jazz piano and voice at about 14 - hardly surprising as both Mum and Dad were professional jazzies. I was into be-bop and the Dead Kennedy's all at once and I never practiced. After school I had the courage to accept that I had a voice, but I didn't study singing properly until after University when I realised it was music I wanted to pursue as a profession.

What do you mean by the "courage to accept" you could sing?

I think it was just about realising that if I wanted to pursue being a professional singer it wasn’t going to be an easy ride. I was never discouraged from becoming a professional artist by my family - quite the contrary - but equally I knew it could be a tough game.

I think some people may be afraid to expose something so personal.

Yes, I think many people hold back from exploring and exploiting their talent for all sorts of reasons: fear of failure, fear of rejection, fear of exposure, fear of poverty. Plus, some people just totally freak out on stage!

So your parents really did support the idea of being an artist of some sort? I am a big believer in mentors - did you have mentors guiding you then?

It may not be conventional, but I'd have to say my father mentored me from an early age. In his own eyes he's a bit of an anti-hero, but in mine, as a mentor, he's the extraordinary intellect and formidable creative who practically forced me to be an artist and did loads of other things along the way like coach me as an athlete, teach me Tai Kwon Do and tutor me academically until I left university. It wasn't easy - a lot of the time it was pure hell! But he definitely taught me to believe in my own talent, and to be strong, different and proud of it. Obviously my magnificent Mum (a female inmate counselor) also mentored me, but in different ways.

Back to the "story" - what music inspired you when you started singing more seriously?

I became obsessed with Indian music by first listening to the compilations coming out of London by Talvin Singh in the late nineties, but then going back to the source and listening to a lot of Hindustani classical music, completely bewitched by its beauty, complexity and capacity to effect my mood. I joined a fusion collective called Dha with a bunch of cool white percussionists and 2 Sikh brothers on tabla and voice/harmonium.

Serendipity plays a part in this, right? You actually went to study in India?

When I discovered a grant to go and study Hindustani vocal technique for jazz singers, I applied and got the gig. Incredible experience, one which has permanently affected my voice. And I ended up doing an impromptu performance with Talvin in Mumbai!

How and when did you actually meet Justin Shave?

I met Shave at Uni and we began making music together almost instantly, but most of it was dodgy. We didn't go pro til the 21st Century.

You formed a duo with him called Etherfox, right?

Etherfox grew out of a dance album Shave and I worked on in 2000 called [love] tattoo]. Good project, but bad people. So having been shunned to the sidelines, we felt the need to subsequently demonstrate that we had been a critical part of its success by doing an encore under our own name.

Etherfox is available on compilations and the net, but when did it all come out?

The Whirled You Live came out on Ministry of Sound in 2003 and was more successful than we'd expected, landing on Hed Kandi's Beach House and several other massive comps, and being licensed to a few European territories. It led to an album deal offer, but we turned it down for various reasons, not least of which because we'd decided to move to the UK.

And Something Different To Say [edit: brilliant song!] is on iTunes in at least the US and UK...

We put out Something Different to Say [iTunes US] through the Shapeshifters' imprint Nocturnal Groove and that also landed on a few fat comps like Hed Kandi again and Fierce Angel as well as reaching #1 in the UK Club Chart.

And since then you've been building up to this solo album, but I have to ask, if you were not in music, what might you do for a living?

I'd be an activist: a conservationist, ecologist, environmentalist or animal rights nutter: the wild woman throwing love bombs at those Japanese whalers heading south right now to murder Humpback whales. Or maybe a sassy subversive politician implementing serious policy changes to reduce our impact on the environment. I'm very committed to all of this stuff. The way I see it, we all have to be now.

This leads to an obvious dilemma: What does a diva do to bring home the bacon pre-"divadom"? Seriously, I'm always curious about how young artists survive.

During the album I worked part-time for an acoustic engineering firm, involved with things like making constant improvements to ensure that our company was operating as sustainably as possible. That and Etherfox /Shapeshifters kept me afloat.

And the setting is now swinging Londontown...

I got bored of Sydney and was lucky enough to be able to emigrate. Funnily enough, I lived here when I was 3 and my first memories are of London - things like a gorgeous little friend Ebony I made at preschool (who I then called my first black cat after back home!), so presumably that had something to do with feeling like I had some affinity with this place. But of course, all Aussies end up in London innit! First two years this time round were rough, but I love her now. I'm just waiting for her to love me back.

Hear/buy Shapeshifters feat. Antigone Instead Of Falling (or UK)

Watch a strange Etherfox video for I Just Wanna Be Loved

Check out Antigone's myspace page which has some samples

The album is expected sometime in the first half of 2008. I hope to do more on Antigone in the New Year, when I'd like to discuss her musical tastes, songwriting and her connection to Darren Hayes...
Posted by xolondon

Email ThisBlogThis!Share to TwitterShare to FacebookShare to Pinterest
Labels: Antigone, interview, Up In 08

XO - what a fab interview...loved how we got to hear more about Antigone's upbrining that made her the artist she is today. I'm so glad you love her music and can't wait to read more of your coverage on her!

Always wonderful to get someback ground on a favorite new artist. Hope this is only the start of succes for our president of Antigoneland!!!

I just wish there was some music out now for people to sample. It's a bit abstract at the moment. maybe people will buy Something Different To Say.

This interview may be more relevant as her release date approaches... I mean her album, not that she's like in the slammer or anything...

"Life Without You' is my fav track right now. Great interview!

What the hell was that music she was talking about being influenced by in the late '90s? What about Steps and Britney? Jesus...

Oh, just kidding...sort of. Great interview! She sounds really intelligent, which is refreshing. Can't wait to hear a full album by her!

Ooh I like Funky Dancer. Look forward to her gigs next year.