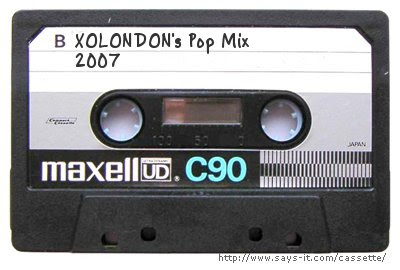 This is not "THE List", but it is dedicated to pure pop music, meaning buoyant and frothy and generally made to make people happy... [songs in no order!]

Let Me Know Roisin Murphy
Diana Ross meets Lisa Stansfield, but better.
Kylie Minogue Wow
Made by God in pop heaven
Sophie Ellis Bextor Catch You
La Bex does her best Deborah Harry
Girls Aloud Call The Shots
In their slightly more grownup mode
Fergie Glamorous
Guilty pleasure from the Juicy Coutured skank
Maroon 5 Makes Me Wonder
Adam goes all Backstreet, but in a good way
Sophie Ellis Bextor Move To The Music
She put this on a b-side?
Natasha Bedingfeld Smell The Roses
A little softness from the overly maligned NB
Rihanna Umbrella
Do I need to say anything other than zeitgeist?
The Revelations If I Called You On The Telephone
The greatest retro pop song nobody knows
Dragonette Take It Like A Man
Another Blondie worthy track from an album that should've rocked the world charts
Pleasure Out Of Love
Fred Ball of Bertine Zetlitz fame creates a perfect, cooing song
Mika Relax (Take It Easy)
Mr Stole My Hair never matched this feat on the full-length
Siobhan Dongahy So You Say
That guy named Adam, mentioned in the song, better be hidin'!
Kylie Minogue Stars
Is this Kylie's version of rock?
Mandy Moore Extraordinary
Could I be more of a ladyman for loving this empowerment tune?
De Souza & Shena Guilty
The one that sample Babs at her most disco swizzy
Etherfox feat Antigone Something Different To Say
Ibiza dancepop masterpiece from the girl with the most cake
Roisin Murphy You Know Me Better
Second best song on Overpowered
Ghosts Stop
Britpop worthy of Culture Club. Needs a "!" at the end of the title
Sophie Ellis Bextor Can't Have It All
Undisputed best ending of a song in 2007
Kylie Minogue The One
I vowed not to try and describe this song again
Sugababes Change
One of the 'Babes best ballads (later whipped into a killer dance mix)
Tracey Thorn It's All True
The song that launched my 2007 obsession with The Pointer Sisters "Dare Me"
Annie Lennox Coloured Bedspread
Like a lost song from 1983's "Touch"

You know, I just made this into a playlist into iTunes and it makes the most fantastic listening - an instant disco party. Love it.

But! Who the heck are The Revelations when they are at home, and where have they been all my life??!!

Funny enough, I was going to make a mix CD to give to pals I see at Christmas, and I just might use this list as a blueprint! Well, exept for that tool Mika.

That Mika song is good except that it's Mika! Anyway, Tricky, the Revelations have another majestic song if you want it. I think it's called I'm A Lover.

Love these choices (except maybe Ms. Moore--can she be more bland?--loved her in Saved tho). Surprised "1234" wasn't in here--I can't get that or that damn Ingrid Michaelson song out of my head!

I sold my Mika CD, but do like 2 songs - Relax and My Interpretation (the least Mika-ish song there).

Re Feist, that song is on my official list and was at one time THE song of the year!

Quite pleased to see "Can't Have It All" in your list, and good point RE: Kylie's "Stars." It's certainly the rockiest she's been in the naughties, or at least since "Did It Again." (I don't count "Kids," that song wore thin on me VERY quickly and it is probably my least favourite song from both Kylie and Robbie.)

XO, rest assured, you'll be seeing The Revelations on my year end list if I can ever get my act together and get it posted! :)