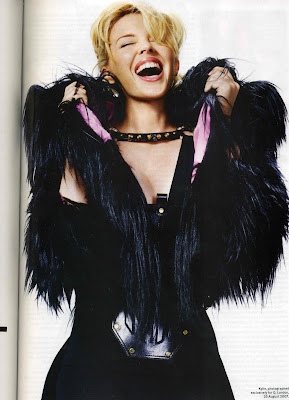 We're getting closer to the new Kylie CD, so here's an update. First, if you have not heard the clips, Arjan found them at 7Digital. Go and play them.

Here are some geeky fan comments I made in an email:

Aside from the songs we know, I think the ones that sound best are Speakerphone (well, an odd one that could be Britney), The One of course, maybe No More Rain, Wow (like early Kylie), and maybe Cosmic.

The negatives: All I See sounds ghetto-ish, but may be okay. Still hate the wooh on Sensititized. Heart Beat Rock sounds like a castoff from Body Language - how I hate Calvin Harris! Nudity is an outright disaster. Very Blacklight.

I am not sure how the reviews will be. One review (Q) already said that at the moment she should be notching it up, she's not. Should be a decent pop CD, but I'd tend to agree that it's no big leap for Kylie. Maybe once I hear the real thing, I will change my mind. Also looks like extra tracks will come out from bsides and Japanese versions, so maybe I can do an Xolondon edit? I did that with Body Language!

The photo above, by William Baker, is a scan from the new Q with the controversial cover. Full scans of the article (and the probably fair Q review) can be found at the exhaustively archival Kylie Brasil. At one point in the interview, Kylie says, "I had to fight to get that on the album, emails flying back and forth," which makes me wonder what kind of control she has 20 years in, having sold millions of records.

I predict X's classics will be Wow, Stars and The One. I won't be able to describe the latter after reading Q's comment that it's "a frictionless techno-pop starship dusted with traces of Blondie and the Pet Shop Boys." Brillo.
Posted by xolondon

Thanks for the headsup XO! I don't really see what all the negative fuss is about. Yes, X does not sound like it will change the world, but it sounds like a moderate progression from Body Language. Like a Drug, The One, and Stars sound absolutely aces, which is generally more than I could have said for Body Language singles possibilities. Speakerphone , No More Rain, and Wow also sound promising, and while I'm not a fan of Calvin Harris either (save for Roisin Murphy's Off & On--wasn't his album just dire repetition?), In My Arms is the best thing he's done.

Some will cry foul with Heart Beat Rock and Nu-di-ty, but they sound like fun vocodered workouts, and Cosmic sounds like a good, melody-infused finish. All I See will be this album's Red Blooded Woman for many, but it does add a bit of variety. Sensitized is the unhearalded track to watch, because when this song leaked early it sounded really bad with the "whoos" in the background, but now that it sounds clearer, although some will still hate the yelps, the song has a darker, crisper sound. Not sure it's a single (Stars is stronger), but it has improved, and I'm not irritated like I was previously.

So, maybe not up to the level of Roisin Murphy or Sophie Ellis-Bextor's recent albums, it does sound entertaining and lively--something to hopefully fuel more upbeat concerts. She could have poured out her heart about the C issue, but why dwell on the sad and negative past. Kylie is about enjoying life--leave the soapboxing to Melissa Etheridge and Sheryl Crow.

Sorry for the length!

"The One" is my fave after sampling them on 7digital. I also thought "Speakerphone" could have been from Shitney, but I'll need to hear the entire song before making such a cruel comparison! :)

The One does sound entirely mesmerising and glorious at the same time. I am really liking Sensitized and Wow, In Your Arms is a bit of a triumph. Yes the album probably will come out at a solid B-ish effort, but it sounds like it will be an essential item for Christmas party soundtracks... Can't wait for the leak, er, i mean to purchase it!

The samples sound good, but I'm holding judgement until I hear the full album. I'm still cursing Capitol US for-yet again-holding its US release until February next year, making have to get the more expensive import. Hey Capitol, think of all the US Kylie fans having to go to bed listening to Britney instead!

Re the Q cover: what a way to say that you've kicked cancer's ass!

FYI, I typed up a long comment here yesterday, but closed out before I realized the word code was entered wrong, and it didn't save.

The gist of it was I like the clip of the song you say sounds ghetto, and that it would have made a better comeback single for Spice Girls than "Headlines." Also, that I like Calvin Harris, but (and again, judging only from a 20 second clip) "Heart Beat Rock" doesn't sound like his best effort.

Ultimately, it's too soon to judge with only those short clips.

Calvin is a one trick pony! :)

Bring on the full Kylie versions, but don't expect a CONversion from me re "Nudity"!