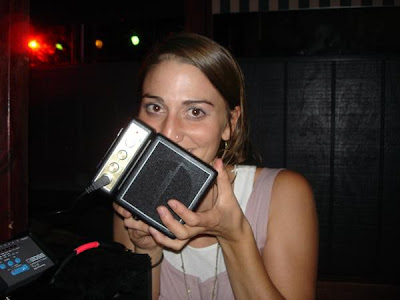 If loneliness, unrequited love and other matters of the heart were meant to be easy, most art would not exist. Songwriters would sing about... what? Artists like Stevie Nicks have long written about how hard it is to be a travelin' woman of rock and roll. When Sara Bareilles sings "It’s clear this conversation ain’t doing a thing / Cause these boys only listen to me when I sing / And I don’t feel like singing tonight" on the melancholy City, she harkens back to several artist "forebears." In 1992, Shawn Colvin described the double edge of songwriting on Monopoly: "I hate that shit / When people say ‘Well, you know, you got a song out of it.” A few years later Sarah McLachlan wrote about being alone on the road, drunk in a hotel room in Angel.

Sara’s Little Voice is the most accomplished debut album of 2007. She’s arrived on the music scene with no eggshell in her hair. Sometimes there is some divine industry power that anoints someone a Star immediately, as happened with Corinne Bailey Rae and Mika recently. Both produced worthy, if not perfect, debut albums and both will suffer a backlash for their fame. Neither is as good or bad as their rep.

The slow build-up for Bareilles (bar-ell-iss) over the last 6 months has been one of proper, old school artist development. iTunes made her single, Love Song, the free Download Of The Week this summer and her PR group pursued bloggers as well as regular media. The same tune - get it on my blog - was a Starbucks' Free Song Of The Day this week. Strangely, Sony did not produce a proper video for Love Song, which also finally happened last week (see it here). She’s adorable and needs to be seen and heard. Thus I've just finished a review I started on July 30...

I've said it before, but I think that Sara has more 70's Billy Joel in her style than any other reference I can come up with. There's something about the witty way Love Song - which is not a love song - rolls along to it's kiss-off conclusion: “I’ll walk the seven seas / When I believe that there is a reason / To write you a love song.”

Little Voice is shockingly consistent. It’s weird to hear an album in this age that can be played from start to finish. Many of the songs, based around her piano, along with traditional percussion and bass, are jaunty singalong tracks. Love On The Rocks has a sort of syncopated beat and a fucked up love theme. You know, the couple that wears you out because they cannot break up: “My friends said I look better without you.” The chorus is gorgeous and breezy, the lyric caustic.

One Sweet Love is a Grey’s Anatomy episode closer if there ever was one. A midtempo, the song’s theme is classic: what if you’ve already had your chance for love? “The time that I’ve taken, I pray is not wasted.”

Sara has a particular gift for the epic ballad. Between The Lines is a massive, emotional song about a woman in denial over her collapsing (or already dead) relationship. The couple has clearly always had a communication problem, which reaches a fever pitch on the bridge:

Album closer Gravity is a classic piano ballad with one of the most impressive vocal performances in any song this year. The note Sara hits at 2:53 makes me want to run around screaming and crying like a maniac. Not that I’m overly emotional or anything like that (!) … it’s just that she manages to elicit as much emotion from the listener as she is giving, without being maudlin or showy. It’s a beautiful song.

I drove around town this summer with Little Voice playing, singing along, even when my voice couldn’t hit the notes. One night I was stopped at a light, wailing away with the car window open, when I realized some dude was staring at me as he crossed the street. It was decidedly not an "oh, the talent!" kind of stare. Whatever dude, Little Voice makes me happy.
___________________________________

Little Voice is only 7.99 on iTunes US. Folks outside the US will need to import the disc. Note that my mention of Colvin and McLachlan is intentional - if you like those artists, you will like Sara Bareilles.
Posted by xolondon

Little Voice is one of my albums of the year... but I think I've already mentioned that.

It's still not out on CD in the UK though. Bugger.

I have been following her for years, and am delighted that she has released the best album of the year (IMHO). It is high time she gets the credit she deserves. It will be at the top of my year end list!

his voice is still perfect... the same sad... i listened to this album here: http://lavamus.com/Album/2455463/Sara_Bareilles/Little_Voice__Special_Edition_/mp3/