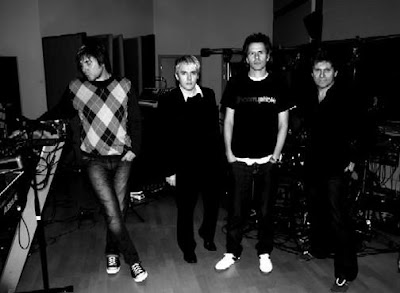 In the summer of 2000, I was walking down King’s Road in London with my cousin, British Bridget, when there was a sudden fracas ahead of us: a tall man in a fake fur coat was running down the sidewalk, screaming and leaping, dragging with him a very skinny, overly tanned woman. It was seeing her – Yasmin - that made me realize this hyper banshee was actually LeBon, Simon Le Bon. I gripped Bridget’s arm, hissed Ssssssimon! and dragged her several blocks, following our man. I mean, he didn’t want privacy, did he? The bastard escaped and now he’s back, seeking attention for his new album, the well-titled Red Carpet Massacre.

Duran Duran’s last album Astronaut was one of those half ‘n’half affairs I always write about: 5 really solid additions to their catalog and a lot of filler. Whatever. It was nice to have them back and sounding Duranish. In fact, I shed a tear, just like Simon did, at the end of their live DVD. After all, Duran Duran was really the start of my interest in finding the newest thing. There are an inordinate number of Duran stories among my friends and I.

Now comes the long-awaited new album, recorded in a fit of creativity after they trashed Astronaut’s intended follow-up, a dour rock album called Reportage. Duran has the dubious distinction of having a lot to lose, in terms of embarrassment, yet they’re unlikely to score a big hit. On Red Carpet, they don’t come anywhere near shame.

Everybody knows about Timbaland’s involvement on this album and if you read this blog, you probably know that I am not a fan of Timba. Color me taken aback, then, that his tracks are the best on here, by far. Nite Runner and Skin Divers both turned me off the first time I heard them and now they’re locked in, a great modernization of the band’s sound with a nod to the Notorious days. Skin Divers survives its “b chorus” spoken by Timbaland, and is worthy just for Simon’s use / pronunciation of the phrase hoi polloi.

The highly rhythmic opener, The Valley, sounds the most like the Duran of Rio to me, especially the strong instrumental break at 2:30 that seems to have fleeting elements of their whole catalog crammed into 90 seconds. Tempted is a crunchy disco number with the great line “Give thanks to London” (I do!). The final minute verges on something Roisin could have recorded for her new album. Likewise, the third Timberland track, Zoom In, is quite catchy, if not terribly compelling, with it’s zooming in and zooming out chorus. Car music.

I am less impressed by Falling Down, the Justine Timberlake contribution. A chugging, slightly bluesy midtempo, it’s no Ordinary World, as it’s been endlessly touted in the press. The version here is 6 minutes long and very crisp – a good song for autumn. But it’s a shitty choice for first single and the video captures the problem Duran faces: they are too old to attract 15 year old girls without coming off creepy and yet they alienate their fans on the cusp of 40 by cavorting with emaciated models in the video.

Box Full Of Honey, which I presumed to be some raunchy sex number before I heard it – see where my mind lays? – is a folky, organic ballad that follows Falling Down. It’s not as good as their best hidden ballads (Michael You’ve Got A lot To Answer For, Serious, etc), but it’s a nice respite on a very produced album.

Mistakes have been made. The title track is a shrill example of an artist “dressing too young” - Simon shrieks like an Avril wannabe on the chorus. The album’s final third is weighed down by leaden midtempos like She’s Too Much and Dirty Great Monster that go nowhere. Fortunately, the album closes on a higher note, Last Man Standing, which is notable for some nice Nick Rhodes synths and a strong wailing vocal from Simon.

There’s only so long this can go on. I mean, Roger Taylor is morphing into Ron Wood! I finally had to pitch my old Latin textbook, the cover of which my friend Joanna had defaced with I love John Taylor. I love John Taylor. For now though I’ll take what I can get, mixing the old with the new, because the music is what counts.

Speaking of the old, check out this baby picture: 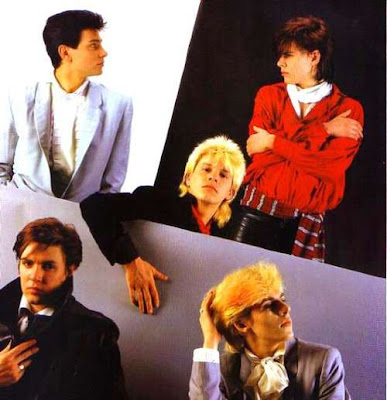 Will be eager to see what my Duranie fannie friends think this album. That means you, Old Hooker. and Krissy, who is not an old hooker... yet!

can i just say you write the best album reviews anywhere. seriously, they have such an insightful flow to them. I worship at your altar!

But I was in love with that whole image and their appearance on SNL that first time blew me away. Especially John's bass playing.

To me, their best memorable recording was "Come Undone."

Anyway, we share this in common that D2 were the first for us into finding something new and along with them came a slew of great other artists to check out during that time. Well, I had to since Blondie was no more then. :)

Good review - And some of us have reached that cusp already. :(

We have similar thoughts on the Duran CD - and just for good measure, I threw in The Hives and their collabo with Pharrell:

Thanks Big John! I think you should write more reviews or at least give frequent recommendations!

Thanks also to Paul and V, I LOVE Come Undone, esp the live version (unplugged) with Lamya.

Haven't heard the whole thing yet, but I didn't care for the title track.

Title track isn't one of the best there...as Simon says on the DVD, "it's a bit Green Day", albeit with a hip hop beat. Actually, RCM is becoming my favorite Duran record since at least as far back as the Wedding album--like 14 years ago! The Valley is a killer song--Waiting for the Nightboat meets Planet Earth with a sinewy Danja beat, some punchy synth drama, nice fills from Roger, and some of John's finest playing/solos since the Rio days (or at least Notorious). Other winners for me--Nite-Runner, Tempted, Skin Divers, She's too Much, and (sorry haters), Falling Down (it is a great song...give it time).

I give them credit for working with someone like Timba. Back in the day, Nile Rodgers was their thing--they loved the Chic sound--and Roger Taylor comments on the DVD how working with new producers was an element of the band that used to make them special. They worked with Don Gilmore and Dallas Austin last time, and while well produced, the results were not so memorable. People will be more likely to remember this album.