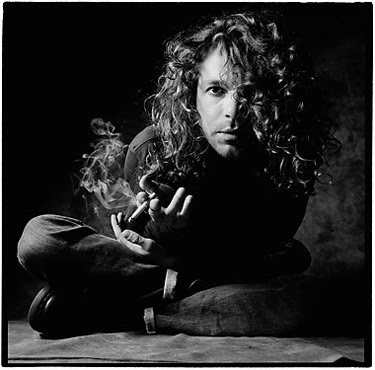 Michael Hutchence died on November 22, 1997. Ten years! What a waste of a great talent and potentially long term superstar. He would have been 47 years old now.

Yes, Goldfrapp leaked. 3 months early. I am laying low about it on the blog for now, but I've been carrying on via email about this brilliant new album, which swerves away from the discopop of Supernature. It seems based in the acoustic guitar, but is not folk. There are lots of electronic flourishes and strings and harmonies. It's a very emotional record too, in the same subtle way Tracey Thorn's was.

Does anyone know anything about Remi Nicole? Should I be paying attention? I doubt it. Likewise, is Palladium the next hot Brit band (albeit in a poppy way)? I like the songs, but am not sure about the vocals.

Here is kd lang's new song I Dream Of Spring performed on Parkinson. Strangely, it's available in the UK via iTunes, but not in the US. ?? The song is a bit bluesier than her usual style, I think.

Here is Ewan McGregor on the same show. Part 1 and Part 2. The usual wide-eyed, toothy delight. Two points leap out at me: 1) He says he's found that the poorest people in the world are often the most generous and 2) that city life is becoming restrictive and less "free" with CCTV cameras watching you everywhere and signs that say "don't do this and don't do that." He feels a nanny state has been created where none of us are relying on our common sense anymore.

Okay, whippersnappers, it's 80's redux from here on out...

Billy Bragg has a new CD called Mr. Love & Justice out in the new year. His first in 6 years. Billy recently performed onstage with Kate Nash, which I think is a wonderful pairing.

Grace Jones has an album called Corporate Cannibal coming out in 2008! Brian Eno is somehow involved. She should pull a page from Marianne Faithfull's book and work with younger artists like Massive Attack and Goldfrapp. And more Trevor Horn please. She's not perfect, but she's perfect for me.

The Blow Monkeys just announced they've reformed. As Shakespeare said, I shit you not. The catch? You have to buy the CD before they record it.

Marc Almond is releasing two more extra tracks from his great Stardom Road sessions. They'll be on iTunes soon. They are covers of Johnny Ray's Cry and an orchestral version of Antony Hegerty's River of Sorrow. If you don't have Stardom Road, get Redeem Me at the very least. It is spine tingling.

Poor Dave Gahan's album has come and gone in a vaporous cloud. He did actually perform the only good song from it, Saw Something, on Spinner.com but other than that, I think there has been minimal promotion. I wonder if that is his choosing? The whole Hourglass project has been devoid of any energy.

Duran Duran's bonus track Cry Baby Cry is very good - like a long lost Notorious cut. Much better than at least 3 of the album cuts.

I just 'heard' Remi Nicole's album yesterday. She only knows a trick or two, so it got tiresome towards the end. In some ways I just get this weird Sandi Thom vibe about her. Do check out Rock N Roll though, that track is very good.
Palladium's frontman sounds a bit like James Blunt (eww) - no I certainly don't need that.

Re: Michael Hutchence... I was working at a Doubletree Hotel (my first job out of college) in Pittsburgh the day he died -- we had a big TV in the worker's cafeteria and it came on the news. I remember INXS had an album out earlier that year, no? I bought Hello magazine on import a couple weeks later just to see the pics of Kylie at the funeral.

Re: Duran Duran -- I only downloaded "Nite Runner" and "Skin Divers," and realized last night how great they sound while driving around when its dark out. Is the rest of the album worth it?

Happiness
How'd you get to be Happiness?
Hoe's you get to find love real love?
Love love love

Thanks for the Kate Bush link. I long for a better world where Eva Green flies.

I like the Remi Nicole songs I've heard, but probably not enough to want to purchase anything by her.

Remi Nicole I *saw* yesterday - she was the warm-up act for Amy Winehouse at Hammersmith Apollo. Nice presence on stage, (friendlier than Amy!) and was quirky and funny. Her band were all nicely styled (for what it's worth!). She finished with 'Rock 'n' roll' which is a good track. That was the one that was on Pj and is worth listening to. Whether the regular album is interesting, I don't know (your earlier commenter seems to have the inside track), but that one song is a bit of fun in a sub-Lily sort of a way.

remi nicole isn't for me, but i think a couple of her songs are quite nice. I need to hear a little more from Palladium before i make a commitment... i think I am still waiting for that next big brit band and am being a bit cautious after the break ups of Mohair and Upper Room. sob.